Extreme machine with some (paved) street cred, as well.

The battle of the off-road extreme machines is about to heat up, Ford today rolling out a complete makeover of its rock-crawling, Baja-blazing F-150 Raptor.

The 2021 Ford pickup will go directly up against the Ram 1500 TRX that won kudos last month as the North American Truck of the Year. The battle is expected to play out not only in showrooms across the country but also in some of the world’s most challenging off-road races, such as the Baja 1000.

“Raptor was born not only to speed over rough terrain but to jump and catch air,” said Todd Eckert, Ford Truck’s marketing manager, during an online media backgrounder. But he and other members of the Raptor team stressed that they worked hard to ensure the new pickup will be reasonably comfortable to drive on paved roads, as well.

Truck fans know that Ford offers a dizzying array of F-150 variants, including the ultra-luxurious Platinum and off-road-oriented FX-4. The Raptor takes things to extremes. And this marks the second complete makeover since the original beast debuted back in 2010.

As one would expect, Ford is using plenty of superlatives, like “best ever” and “first-in-class” to describe the 2021 Raptor. Though its debut is likely to touch off plenty of debate – especially between Ford and Ram fans, initial indications suggesting the second-largest Detroit automaker has plenty of reasons to be boastful.

The truck adopts a new, electronically controlled five-link suspension with notably more wheel travel than the outgoing Raptor, as well as the first 37-inch tires available in the segment out of the factory. The pickup also gets a bump in performance with its twin-turbocharged 3.5-liter EcoBoost V-6 – and it even adds adjustable exhaust sound control that might fool you into thinking there’s a V-8 under the hood.

There are also some practical features to add to Raptor’s appeal, such as the built-in 2.0 kilowatt-hour generator and the fact that it’s “the most connected F-150 Raptor ever,” said Eckert.

From a creature comfort standpoint that means you’ll be able access the Internet and stream content through onboard WiFi. But there are other benefits, according to Ford, including the automaker’s newest SYNC 4 infotainment system with cloud-connected navigation and voice search, as well as the FordPass mobile app that lets you access the truck remotely. You’ll not only be able to remotely lock or start the engine but control the truck’s lights.

Longer term, the WiFi system will enable smartphone-style over-the-air, or OTA, updates. That will let Ford handle potential problems by tweaking vehicle software, while also offering, it said in a statement, “potential features like shareable digital trail maps or other off-road technologies in the future.”

For some buyers, all that is high-tech gravy, of course. What matters most is the 2021 Ford F-150 Raptor’s off-road capabilities.

The automaker beefed up the suspension with the new five-link design in the rear. Adding a Panhard Bar and updated springs, among other changes, allows for 15 inches of wheel travel in the rear, 14 up front. And the new Fox Live shocks used with the standard-issue 35-inch wheels can be adjusted 500 times a second. (A different Fox shock package is used with models shod with 37-inch rubber.)

Forget all the high-tech toys inside, this is the most electrified platform ever for Raptor, said Carl Widmann, the chief engineer for Ford Performance. That certainly plays out in a variety of ways, enhancing the truck’s ability to run fast on the Baja sands, climb boulders, and take the highway out to your favorite off-road trail.

Ford offers all the basics you’d expect in a serious trail truck, starting with the new low-speed transfer case. It adds features like one-pedal driving which obviates the need to keep moving your foot from throttle to brake, slowing the vehicle sharply when you ease up on the gas – which is particularly useful while rock crawling.

Add to that the Trail Control feature first seen on the more mainstream F-150 line-up. Think of it as off-road cruise control. Tap a button, come to your desired crawl speed and lift both feet to maintain that speed until you hit the brakes again.

The 2021 Raptor also will come equipped with a seven-mode Terrain Management system. Turn the dial to instantly adjust all manner of vehicle functions, everything from throttle response and transmission operation to shock settings. The list includes Raptor-specific Baja and Rock Crawl modes.

You’ll be able to track what’s going on with the truck using a specially modified version of the Sync 4 system that includes multiple camera views that, among other things, let’s you see where your wheels are at any moment. That can make a crucial difference on a tight trail or when maneuvering over boulders.

From a powertrain perspective, Ford is being a bit coy ahead of Raptor’s arrival in showrooms. We know the twin-turbo V-6 in the outgoing model makes 450 horsepower and 510 pound-feet of torque. We’ll have to wait to find out what the 2021 EcoBoost package – here mated to a 10-speed automatic – will deliver, though Widmann hinted there likely will be little change.

What’s certain is that it won’t come close to the numbers Ram is delivering out of the TRX, a mind-boggling 702 hp and 650 lb-ft of torque using a modified Hellcat V-8.

The truck will certainly sound like it can take on all comers thanks, in part, to the active engine sound enhancement system. Around home, suggested Widmann, you’ll likely opt for the most restrained setting – unless you hate your neighbors. Out on the Baja, set to fully unrestrained mode which, he explained, “has an added benefit. We can get the most benefit throughout the torque band.”

Visually, the 2021 Ford Raptor falls in line with what we saw with earlier additions – though perhaps not quite as radical an update as Ram made transforming the more staid 1500 pickup into the TRX.

While “the idea of the Raptor is rooted in desert racing,” according to program manager Tony Greco, the primary visual influence is the F-22 Raptor fighter jet, said Tom Liu, the lead exterior designer.

With its 145-inch wheelbase, updates include a wider, more stable-looking grille and bumper, topped by a flat-edged hood with a functional heat exhauster. There are new front market lights and three-dimensional daytime running lights, with available LED foglamps. The triple-ribbed front skid plate slopes up aggressively, offering no chance to mistake this for the relatively mundane F-150 FX-4.

There are F-22-inspired exhausters behind the front wheels, and sculpted lines flaring into the doors. In back, the bumpers have been revised to enhance ground clearance, and there are unique exhaust tips and black-out taillamps.

Inside, Ford maintained a number of basics design elements and features now available in the main F-150 series, including the fold-away shifter that helps create a massive work surface atop the center console. But the 2021 Ford F-150 Raptor also adds a unique wheel, makes use of special materials and finishes, adds more heavily bolstered seats – and offers options Recaro sports buckets and carbon fiber accents.

This mean machine will shortly go into assembly at the big Ford truck plant in Dearborn, Michigan, with the first Raptors set to reach showrooms by summer. And, for those who want to push the envelope even further, Ford hints that the Raptor R edition “is coming next year.” This V-8-powered edition should significantly narrow the pony gap between the new Raptor and the Ram TRX. 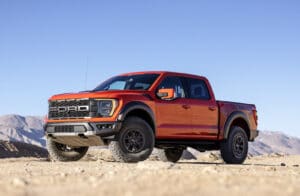 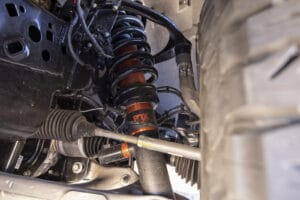 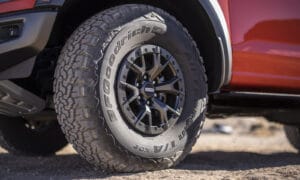