Acura "kicks out the ladder" with an extensive redesign of its flagship SUV.

In today’s crowded and highly competitive luxury market, Acura has long struggled to gain traction. It certainly didn’t help when the brand abandoned familiar and well-regarded model names like Legend for anonymous alternatives such as RLX, ILX and TLX. Yet one model rose out of that alphabet soup, the big MDX sport-utility vehicle year after year coming in as one of the U.S. market’s best-selling three-row models.

There’s good reason why, the MDX offering a consistently solid mix of styling, features, roominess and performance. All told, Acura has sold more than 1 million of the crossovers since its introduction two decades ago, and it has high hopes for the latest makeover coming to showrooms as an early 2022 model-year entry. To get a chance to see how well it holds up, I not only spent a week in the new MDX but also got back into the outgoing model and several key competitors for comparison.

Overview: There are plenty of risks when redesigning a brand’s flagship and icon, especially when the goal was “to take MDX to a higher level,” as Tom Nguyen, Acura’s global development leader explained during a recent conversation. His team decided to “kick out the ladder,” rather than play it safe with a bland, evolutionary update.

Designed, engineered and largely targeting the U.S. – where it also will be assembled – the fourth-generation makeover is substantial, picking up on the brand’s new mantra, “Precision Crafted Performance,” highlighted by the debut of last year’s new TLX sedan. The goal was to not only update the design language of the 2022 Acura MDX but also to inject higher levels of craftsmanship, performance and technology.

For the most part, the automaker has succeeded. The visual update translates into a standout design, both inside and out, while the cabin gains a more upscale and refined feel. It’s also roomier, with a third row that is far less of a penalty box than with the outgoing model. Add new features, beefed up performance and a ride that is both comfortable and yet also solidly planted and Acura has delivered the sort of update MDX fans have hoped for.

Exterior: Honda’s upscale brand offered a strong hint of what was coming when it rolled out the Acura MDX Prototype last October, the production version of the MDX that followed two months later diverging only slightly. Both share the same design language brought to market with the latest-generation TLX sedan – here tweaked for a big SUV.

“… The goal was to not only update the design language of the 2022 Acura MDX but also to inject higher levels of craftsmanship, performance and technology …”

And big is the right word, the 2022 MDX stretched 2.2 inches, to an overall length of 198.4 inches. Width grows to 78.7 inches, about an inch more than the outgoing model. Height rises to 67.1 Inches, a 0.6-inch increase. And, what might be most noticeable to a casual eye is the fact that the dash-to-axle ratio extends another 6 inches emphasizing the

Like the concept model, the production MDX avoids the slab-like face that’s become the norm for oh, so many recent SUVs. The front end has a more three-dimensional appearance, with a larger version of the familiar Acura “Diamond Pentagon Grille.” It’s framed within four-element LED “Jewel Eye” headlamps and “Chicane” running lamps.

The overall look, according to the design team, was motivated by “the wind-shaped rocks in Arizona’s Antelope Canyon.” That translates in more pronounced shoulder lines and more sculpting to the door panels and back end.

Interior: There’s a less aggressive rake to the roofline of the fourth-generation MDX than with some competitors, which is good news for those taking a seat in the third row. It benefits greatly from the overall increase in the new model’s dimensions. Cargo space, meanwhile, increases by 1.5 cubic feet, behind the third row, to 16.3 cf, jumping 3 cf to 71.4 cf with the second and third rows folded down. Those numbers don’t even take into account the new under-floor storage bin in the cargo compartment.

Like the TLX Acura, the new MDX opts for a more sporty cabin design while also enhancing the high-line details befitting of its flagship role. The instrument panel adopts a horizontal layout which, like the rest of the cabin, blends materials such as Milano leather, brushed aluminum and open-pore wood.

But the anchor of the Precision Crafted Cockpit is that 12.3-inch customizable gauge cluster which can be switched between two distinctly different appearances. A second, wide-screen 12.3-inch display handles infotainment duties, while there’s also an optional, 10.5-inch head-up display.

On a less high-tech front, the front seats feature 12-way power settings and the MDX A-Spec model adds ventilated front seats and even optional power-adjusting side and thigh controls. The second row features a multi-function removable seat which, among other things, can ease entry to the third row. All three rows are more spacious than the outgoing model, according to Acura.

One only has to climb back into the outgoing MDX to realize just how much the overall look and feel of the MDX has improved. While tech-oriented buyers are likely to really appreciate the 2022 model – all the more so with the optional ELS Studio sound system – yet the electronics don’t overwhelm the overall sense of luxury and refinement.

Powertrain: Offered in both front- and all-wheel drive, the MDX will launch with a 3.5-liter V-6 carried over from the third-generation SUV.  It pushes 290 horsepower and 267 pound-feet of torque through a new 10-speed automatic.

The engine has received a number of updates for 2022, such as new, multi-hole fuel injectors. The result is a quieter, cleaner and more fuel efficient powertrain delivering 19 miles per gallon city, 26 highway and 22 combined with the FWD 2022 MDX, while the AWD version is EPA-rated at 19/25/21. Meanwhile, the 2022 model now can tow up to 5,000 pounds.

There are plenty of competent all-wheel-drive systems on the market today, but Acura’s Super-Handling All-Wheel-Drive, or SH-AWD, system has long been one of my favorites. The fundamental concept of an AWD system is to move torque back and forth between the axles, depending upon road conditions. The SH-AWD update on the new MDX can move up to 70% of that power to the back wheels – and then direct as much as 100% of that torque to either left or right wheels. That’s where it really does enhance handling through what is known as torque vectoring.

For those who’d like to put more emphasis on the “sport” in SUV. Hang tight. The real performance package, the MDX Type S, will follow next summer and use a 3.0-liter turbocharged V-6 that promised to push past the 300 hp mark.

Technology and Safety: Like the rest of the industry, Acura has added plenty of new, high-tech features in recent years, and the 2022 MDX goes a step beyond what we already saw with the latest-generation MDX. For one thing, the SUV is the luxury brand’s first model to fully integrate the Amazon Alexa voice assistant. It also gets a standard WiFi hotspot – which, behind the scenes, allows Acura to send smartphone-style over-the-air updates to the vehicle.

There are plenty of USB port and a quick, 15-watt wireless charging pad.

The most immediately apparent update, however, comes with the onboard infotainment system. It now uses a 12.3-inch video display that can be operated by voice, touch controls on the steering wheel or the touchpad on the center console replacing the control knob on the outgoing MDX. It’s a controversial move as even members of the Acura team acknowledge it can be difficult to learn to use. They contend it is much more effective when you get familiar with it. After a week I was still getting comfortable but agree it does have some advantages.

The infotainment system itself now has a faster processor, adds wireless versions of Apple CarPlay and Android Auto, integrates a high-definition rearview camera and an interior PA system making it easy to chat with folks in the third row. My personal, favorite feature of the 2022 Acura MDX, however, is the audio package – in particular, the optional, high-end ELS Studio 3D Premium Audio system. With its 16 speakers and 710 watts, it makes you feel like you’re right on stage. I frequently found myself sitting in the SUV after reaching my destination, eyes closed, listening to music. 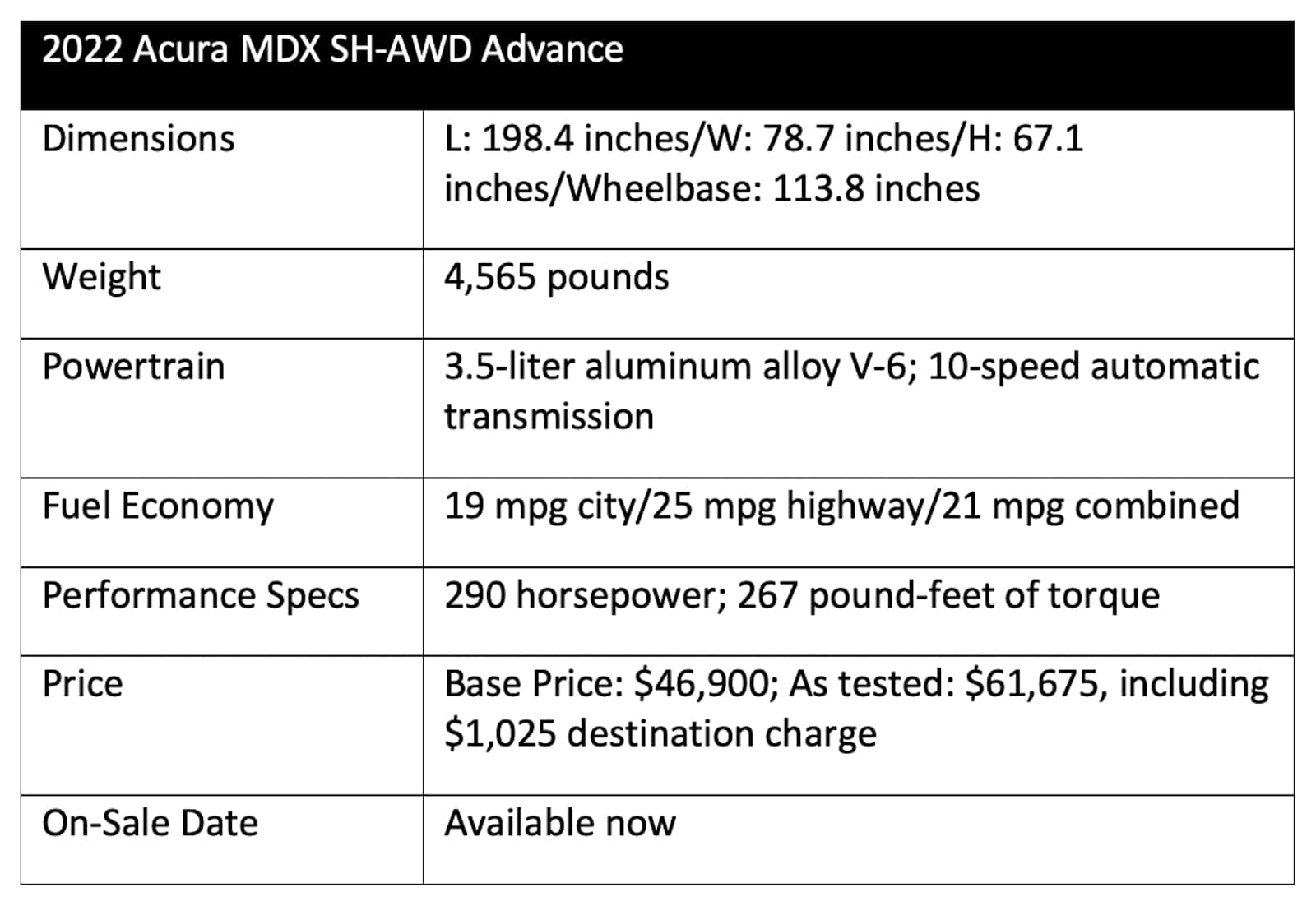 As a family hauler, the MDX needs to offer plenty of safety features and it certainly comes through with a suite of smart safety systems that, for 2022 add low-speed braking control, traffic sign recognition, Traffic Jam assist and a sonar based system designed to minimize the chance a driver inadvertently hits the throttle instead of the brake at low speeds. There’s also a completely new airbag system meant to reduce head injuries in a crash.

Drive Impressions: The overall driving experience lived up to what Acura promised – something that became all the more apparent when I not only switched into competitive models but the outgoing version of the MDX. Taking both out on a favorite driving route through the appropriately named Hell, Michigan highlighted the way the new SUV’s updated double-wishbone front suspension and more rigid platform and body keep it firmly planted while minimizing road harshness.

Even in “Sport” mode, the 2022 MDX seemed more comfortable than the old model set to “Comfort,” with less jouncing, body roll and head toss. It also handled the route’s sharp corners and rough, often oft-camber road surfaces with aplomb. It was easy to take turns faster without any extra effort. Credit also goes to the updated electric power steering system which features more precise driver feedback and a quicker steering ratio.

Wrap-Up: Acura was the first Japanese luxury brand and, in its early years, set a real benchmark with models like the Legend sedan and coupe. The MDX was one of the early luxury SUVs when it debuted for the 2002 model-year and reminded us of the technical expertise Acura brought to market.

Despite the brand’s unfortunate use of forgettable model names, plenty of buyers have found their way to the MDX, and for good reason, it remaining one of the luxury market’s best three-row options, generation after generation. Now, after undergoing another complete makeover, the 2022 Acura MDX will remain one of the best options buyers have. The fourth-generation SUV is attractive, inside and out, well-appointed and, despite some grumbles about its touchpad, among the most technically sophisticated options available.

It’s also more affordable than many buyers might expect, at a base $46,900 – before delivery fees – the 2022 MDX coming in only slightly above the price of the average new vehicle on the market right now. For $60,650 for a well-equipped MDX Advance with the SH-AWD system, you get a lot for your money.

I’m betting that the 2022 Acura MDX will be the most popular version of the crossover since its introduction two decades ago. 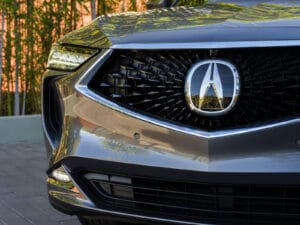 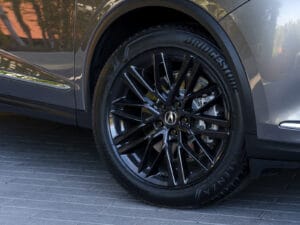 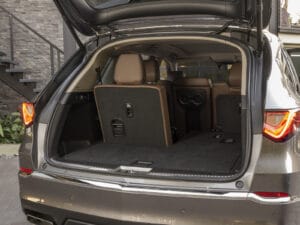