Tesla CEO Elon Musk wants his day in court, and the EV maker’s filed a petition to get it, appealing a recent ruling by the U.S. National Labor Relations Board that he’s violated U.S. labor law.

As part of the NLRB’s ruling, Tesla and Musk were required to perform several actions, not the least of which is a mandate that Musk take down a now nearly three-old tweet suggesting that if Tesla employees joined a union they could lose stock compensation.

The electric car maker filed a petition on April 2 with the New Orleans-based U.S. Court of Appeals to review the NLRB’s decision and order issued on March 25.

The NLRB ruling stated that Tesla violated federal labor law when it fired a union supporter and moved to block a union organizing drive at its plant in Fremont, California.

In addition, the NLRB found Tesla and the company’s freewheeling CEO, Elon Musk, violated the law and ordered them to stop interfering with workers seeking to organize a union at the Fremont plant, handing a victory to the United Auto Workers (UAW). The ruling on union activity by employees also extends to any other installation operated by Tesla in the U.S.

The dispute between Tesla and the UAW has been ongoing.

The union began an organizing effort at Tesla more than five years ago and filed the unfair labor charges against the company in 2017 after security guards seized union literature and one of the leaders of the UAW effort inside Tesla was dismissed.

Tesla is disputing the NLRB’s ruling and asked the court to review the order and grant Tesla “any further relief which the Court deems just and equitable.”

Tesla’s Musk has long disputed that his company is against union organizing.

In a 2018 tweet, Musk wrote: “Nothing stopping Tesla team at our car plant from voting union. Could do

so tmrw if they wanted. But why pay union dues & give up stock options for nothing? Our safety record is 2X better than when plant was UAW & everybody already gets healthcare.”

The NLRB ruling ordered Musk to delete that three-year-old tweet warning employees they could lose their stock options if they opted to join the United Auto Workers, which had begun an organizing drive in Fremont. Compensation, including stock options, are subjects of contract negotiations under federal labor law.

The NLRB ordered Tesla to offer one of the former employees reinstatement. The company was also directed to rescind rules established in 2017 that prohibit the distribution of union literature in its parking lot on non-work time.

Tesla and Musk also must rescind or revise the company’s confidentiality agreement imposed on Tesla employees in 2016 as the organizing drive appeared to pick up momentum and post notices in the Fremont plant that employees have the right to join a union or join with other employees to campaign for union representation. 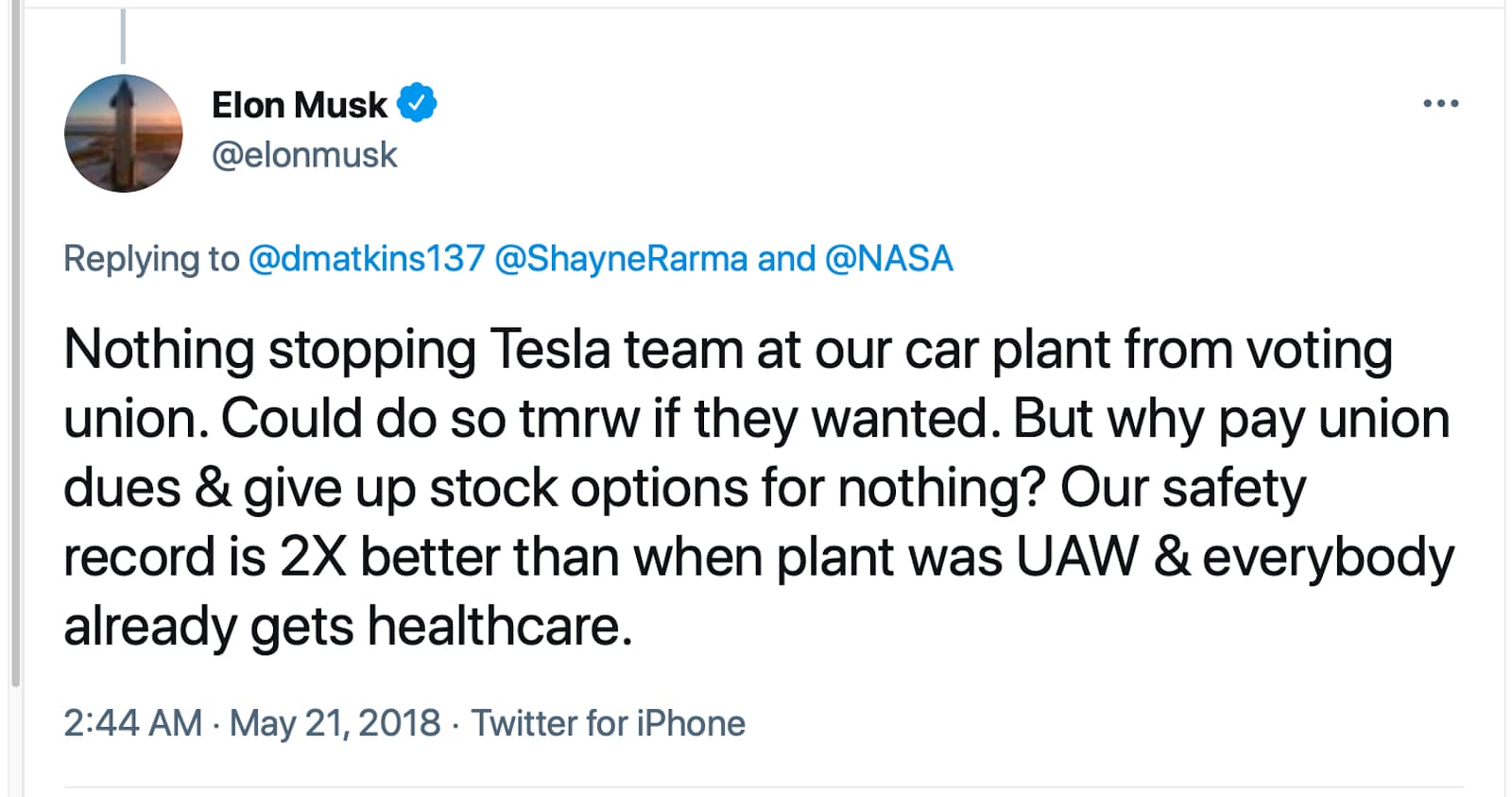 The UAW responded quickly to Tesla’s motion against the NLRB ruling.

“Like nearly two thirds of the general public, workers at Tesla understand the value of forming a union and engaging in collective bargaining,” said Cindy Estrada, UAW vice president and director of the UAW Organizing Department.

“These workers continue to discuss the best path forward, especially knowing how hard companies like Tesla will try to intimidate and pressure their co-workers into opposing unionization. We will continue to support and stand behind these workers as they organize and fight to win their union.”