Goal was to improve the confidence in the system.

Among all of the impressive perks Infiniti packs into the 2022 QX60, the latest version of the brand’s ProPilot Assist may garner the best reviews.

Infiniti’s updated the semi-autonomous technology to better integrate the vehicle’s navigation system and real-world information. The result is a vehicle better able to adapt to things like curves and exit ramps.

The new edition, which comes in the new ute arriving later this year, also offers Traffic Sign Recognition. This technology can adjust the vehicle’s speed to match the speed limit on whatever section of road is being traveled.

“With the all-new QX60 and its ProPilot Assist enhanced by navigation, we’re working to keep that tradition alive. Whether on a long haul for the weekend or a long highway commute on the way home at the end of the day, we’re proud to offer systems that intuitively back the driver.”

The new iteration of ProPilot Assist combines information gathered from the QX60’s sensors and cameras with navigation information to assist its driver better.

The data analyzed from the navigation system could include upcoming curves that require the QX60 to slow or exiting on an off-ramp. An extended automatic restart system now supports stopping for up to 30 seconds in stop-and-go traffic situations.

The technology and its cluster of sensors and cameras offers more than just the ability to get centered in a highway lane, press a button and relax. It’s an adaptive system that recognizes many real-time changes and adapts accordingly.

Some of that hinges on the Traffic Sign Recognition technology. It relays important information to the driver

using the instrument cluster or an available head-up display. When ProPilot Assist is engaged and customized to follow posted speeds, information gathered from the onboard system can help the driver quickly match speeds in changing speed-limit zones.

When entering a new speed-limit zone, the system can prompt the driver to accept a change in set speed to match, or the system can automatically change set speeds. This is all done immediately, but also smoothly, mirroring how a human would make changes.

The goal with the update was to engender trust and confidence, which can be difficult since many drivers still don’t have a lot faith in this type of technology yet. This is accomplished, according to Infiniti, by making the semi-autonomous mode performance more like that of a human driver.

“For the all-new QX60, we really wanted to up the ante to improve the confidence that customers w 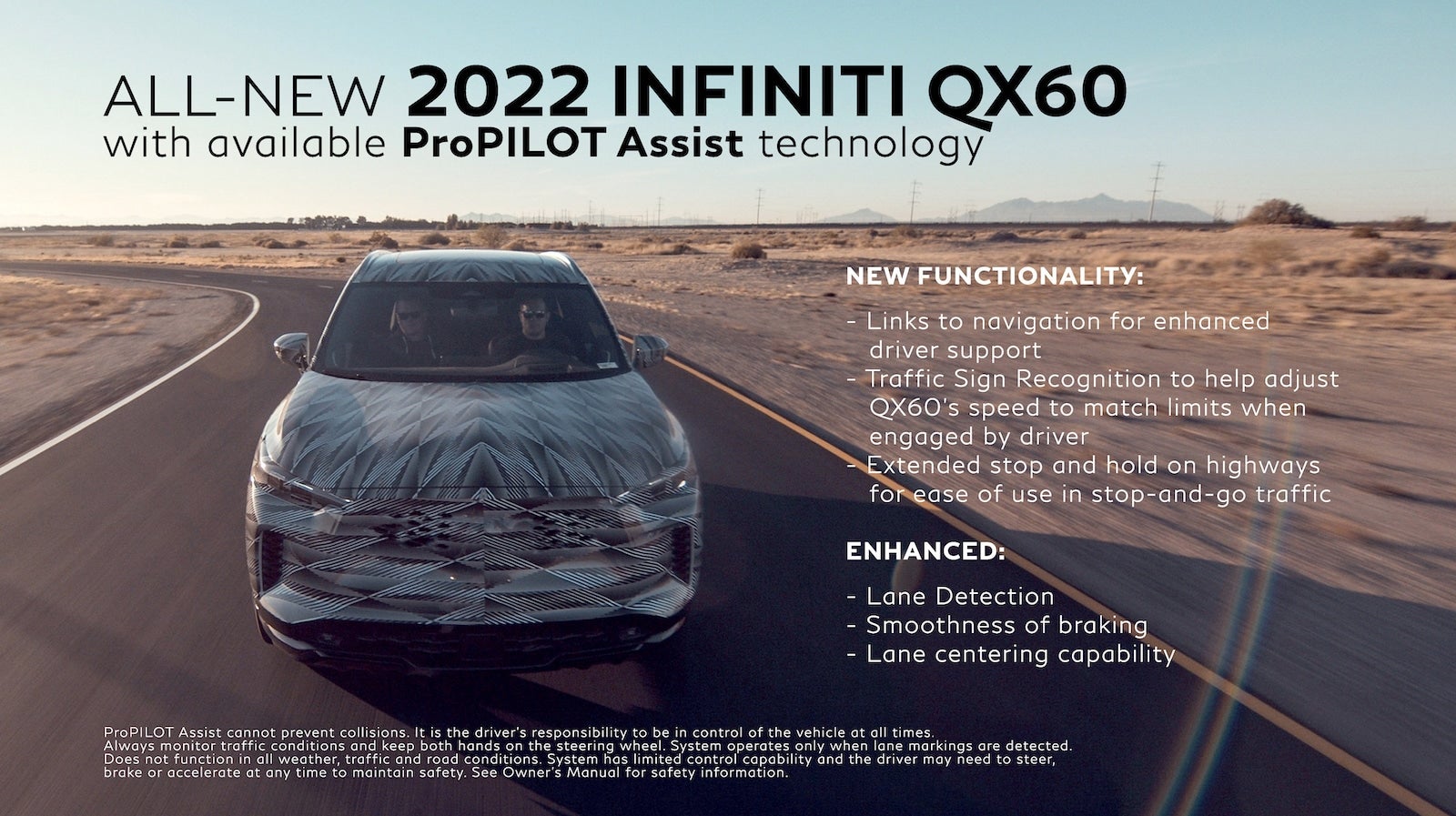 “I like to think of it as a wetsuit. When you put one on and you jump in a lake, the wetsuit will not swim you to the other end of the lake.

“But while you’re swimming, it’ll help keep you comfortable, and it reduces the amount of energy you have to spend because it helps you float. It’s the same with ProPilot Assist — it doesn’t drive you from point A to point B, but while you’re driving, you’re more comfortable and confident.”