When it comes to gas prices at the pump, what goes down will eventually come up.

Motorists are paying some of the highest gas prices seen in over a year, according to AAA and GasBuddy.com. With the forced shutdown of Gulf Coast and some Midwest refineries due to recent winter weather, gasoline stocks have tightened and gas prices have skyrocketed.

Prices are jumping by double-digit amounts

Gasbuddy.com reported the national average price rose for the seventh consecutive week and at its fastest pace since Hurricane Harvey, rising 10.4 cents per gallon compared with the previous week to $2.63 as of Feb. 22.

The website compiled the data from more than 11 million individual price reports covering more than 150,000 gas stations across the country. Additionally, GasBuddy determined that the national average price of diesel jumped 8.7 cents in the week prior to Feb. 22 and stood at $2.84 per gallon.

Federal statistics released on Feb. 22 show how gas prices stood around the country. The average price per gallon (ppg) in the U.S. as of Feb. 22 was $2.63, a 13-cent ppg increase from the previous week. Gas in the East Coast region was $2.60 a gallon, up from the prior week price of $2.47.

“With last week’s (Feb. 15 – 21) extreme cold shutting down millions of barrels per day in refinery capacity, gas prices have seen their largest weekly climb in quite some time,” said Patrick De Haan, head of petroleum analysis for GasBuddy.

“The jump in price was the result of a dozen or so refineries, primarily in Texas, that were forced to shut down as the frigid temperatures threatened to wreak havoc on their exposed equipment. With the cold weather behind us, price increases should begin to slow later this week or next week, and so long as these refineries get back online in short order, we may see gas prices start to move back down in the next couple of weeks.

De Haan quickly tempered any joy about drop reminding that spring is coming, which means prices will rise again as “refineries start to transition to summer gasoline, so motorists shouldn’t jump for joy just yet.”

“When close to 40% of U.S. crude production is offline because refineries are closed, there is going to be pain at the pump until operations resume,” said Jeanette Casselano McGee, AAA spokesperson. 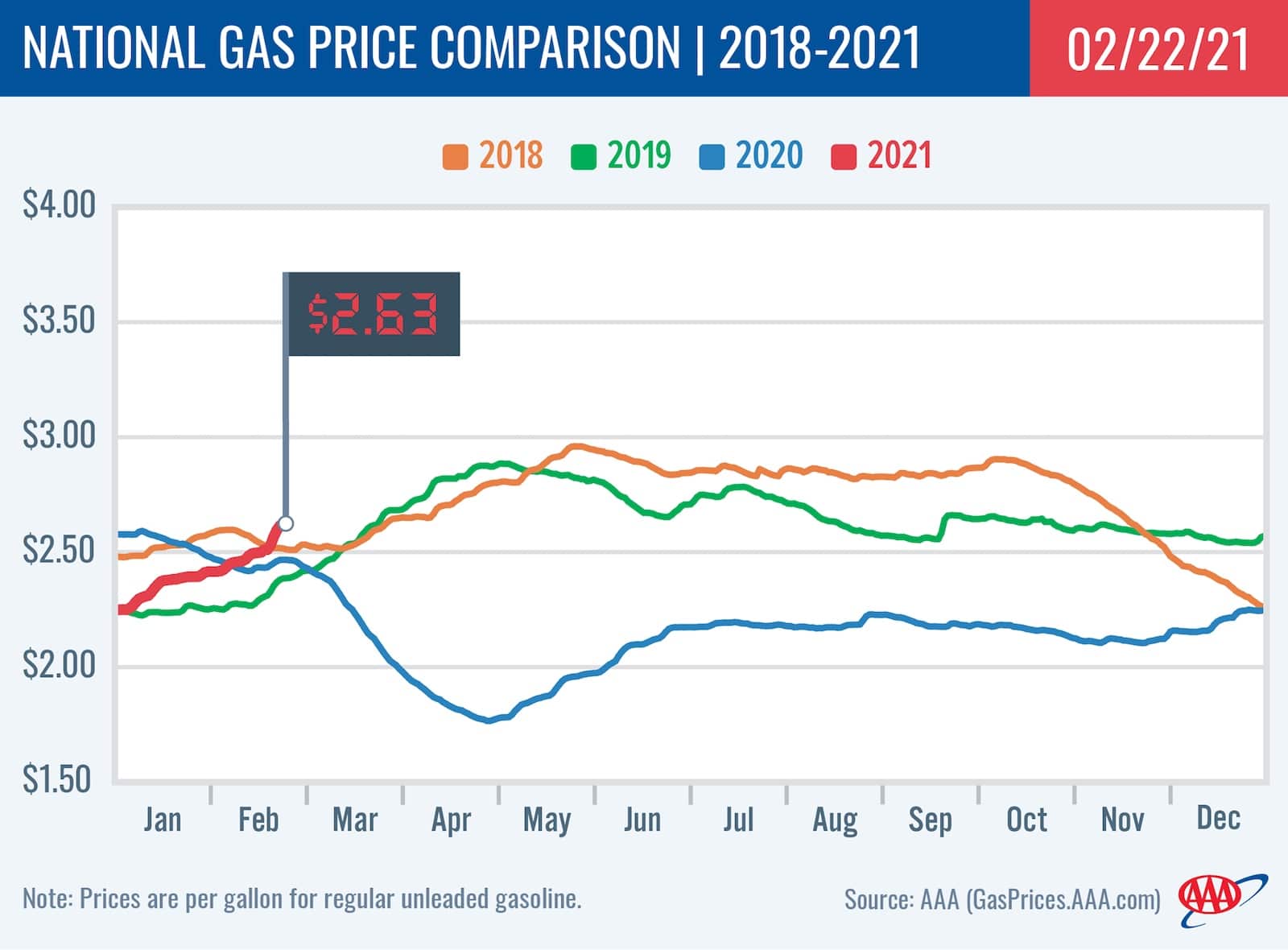 “The good news is the nearly two dozen impacted refiners are expected to restart operations this week, if they haven’t already. That means regular gasoline deliveries will resume and impacted stations will be re-fueled.”

In the week prior Feb. 22 there were reported refinery outages in Texas, Louisiana, Oklahoma, Arkansas, Tennessee and Kansas. AAA reported that gas prices are likely to be volatile until crude production is back to normal levels. Motorists can expect these more expensive prices to stick around, but large spikes are likely to subside.