Online sales jumped dramatically during the pandemic in 2020. 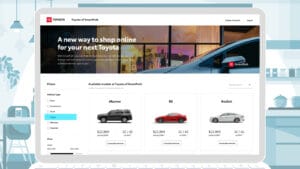 Toyota is making the buying process easier and more transparent with its new SmartPath program.

Analyst after analyst said that 2020 would leave an indelible mark on the automotive industry, specifically how new cars, trucks and utility vehicles are sold. Toyota and its luxury unit, Lexus, are proving them right.

Each company unveiled new retail “experiences” today, Toyota with “SmartPath” and Lexus its “Monogram” program. The goal is to allow potential buyers a flexible experience starting with the internet, giving them as much or as little “personal” touch as they desire.

“Our goal is to ensure we create the best experience for our customers and our dealers,” said Jack Hollis, senior vice president, Automotive Operations, TMNA. “As our customers’ expectations evolve, SmartPath provides our dealers the technology to exceed those expectations. Our shared mission is to make the experience of shopping, buying, and owning a Toyota as easy and carefree as driving one.”

The Japanese automaker isn’t going it alone in this area. Most automakers have offered some form of online shopping for several years now; however, there are some automakers that are bulking up their online sales programs, notably Nissan. nline sales program in late December. Called “Nissan@Home,” the process allows buyers to handle everything online from test drive to delivery. It tested the program at seven dealerships to work out the kinks before moving to a nationwide offering.

Toyota may have recognized the trend to toward growing internet sales early as it began piloting SmartPath in 2019, but the automaker recognizes that the COVID-19 pandemic “accelerated consumer demand for digital transactions.” The company noted a recent survey showed that two out of three shoppers are more likely to purchase a vehicle online.

Monogram, the Lexus program, just as is the case with SmartPath allows buyers to start their buying process online. The system is designed to be transparent in order to make the process easier for the potential new owner as well as dealership personnel.

Both programs are currently in what’s best described as an expanded pilot phase. It’s available in several markets, at least 50 in the U.S., with plans to continue expanding it throughout the year. The flexibility of starting with the internet, but inviting an actual person in at any point in the process seems to fit with exactly what buyers want these days.

Automakers should get used to it, according to a recent study by Gartner Research. Currently less than 1% of all sales are completed online, that number is expected to jump to 20% within five years.

Mercedes-Benz, Ford, General Motors and other automakers all referenced significant upticks in internet-based sales in the last year.

However, a trend isn’t a majority necessarily. According to Deloitte’s newest report, the 2021 Global Automotive Consumer Study, release in mid-January, the number of people buying vehicles online during the pandemic was done more out of necessity than preference.

Seventy-one percent of U.S. vehicle buyers prefer an “in-person sales experience,” the study revealed. This biggest part of that is 75% want to see and touch the vehicle before they buy it, with 64% needed some time behind the wheel as well.

“Unlike many other retail sectors that have seen a wholesale shift to online buying, purchasing a vehicle remains a largely personal experience for many consumers,” said Karen Bowman, vice chairman, Deloitte LLP and U.S. automotive sector leader.

“However, some people will be looking for a virtual sales experience to maximize convenience, speed and ease of use. This will likely result in a more complicated, and potentially costly, set of consumer expectations for dealers to meet at a time when businesses are looking to recover and thrive in the wake of the pandemic.”

(Pandemic may not have changed car buying habits of consumers.)

One area where U.S. consumers were happy to see handled via the internet was vehicle service. The ability to get online and have your car or SUV picked up by a dealer at home or work was appealing with 46% of respondents in favor of that type of interaction — provided it is free.