Ioniq 5 will be first to use the new architecture.

With a variety of different models in its line-up, including the Soul EV, Ioniq EV, Niro EV and Kona EV, Hyundai Motor Group already has more all-electric offerings than the rest of its Asian rivals. And the South Korean carmaker isn’t stopping there. It’s getting set to launch the all-new Ioniq EV sub-brand and, overall, bring to market 23 different battery-electric vehicles, or BEVs, through its various brands by 2025.

What Hyundai has needed is a dedicated platform to use for that electric onslaught. Now, it is ready to go with its skateboard-like platform dubbed E-GMP. While there may be additional platforms to follow, this one provides the flexibility needed to handle a broad range of products.

That’s critical considering the group’s lofty aspirations. It expects to be selling fully 1 million electrified vehicles a year by mid-decade through the Hyundai, Kia and Genesis marques, as well as under the new Ioniq badge which will be sold through Hyundai brand dealers.

“E-GMP is the culmination of years of research and development and brings together our most cutting-edge technologies. Our BEV line-up will evolve and be strengthened by this innovative new platform,” Fayez Abdul Rahman, senior vice president of Vehicle Architecture Development Center for Hyundai Motor Group, said during a webcast.

The new platform is to debut under the skin of the Ioniq 5, a production take on the sharply angled Hyundai 45 concept vehicle unveiled at the 2019 Frankfurt Motor Show.

Much like the platforms being developed by competitors such as General Motors, BMW and Volkswagen, E-GMP mounts its motors, battery pack and other key drivetrain components below the floorboard. The approach has numerous advantages, lowering a vehicle’s center of gravity and freeing up space normally devoted to the engine compartment. That can translate into significantly more room for passengers and cargo.

Conceived to be rear-wheel-drive, E-GMP also can be configured in an all-wheel-drive layout, noted Hyundai Motor Group (HMG) R&D President Albert Biermann. That will permit the use of one or more electric motors. How much power

they’ll be able to deliver, Hyundai isn’t saying. But it offered a hint by noting that a high-performance model will be able to launch from 0 to 100 kmh (62 mph) in “less than 3.5 seconds,” and reach a top speed 161 mph.

“Today our front-wheel driven Hyundai and Kia BEVs are already among the most efficient ones in their segments,” Biermann said. “With our rear-wheel driven based E-GMP, we are extending our technological leadership into segments where customers demand excellent driving dynamics and outstanding efficiency.”

As for battery capacity, Hyundai has also left out that detail as well, though it did suggest the E-GMP platform could support vehicles offering range of up to 500 km, or 310 miles, using the European WLTP test cycle. EPA’s tougher standards would drop range ratings in the U.S. somewhat. Based on what today’s BEVs are delivering – generally about 3 to 4 miles per kilowatt-hour, that would suggest the E-GMP platform might hold close to 100 kWh of lithium-ion batteries, at max. 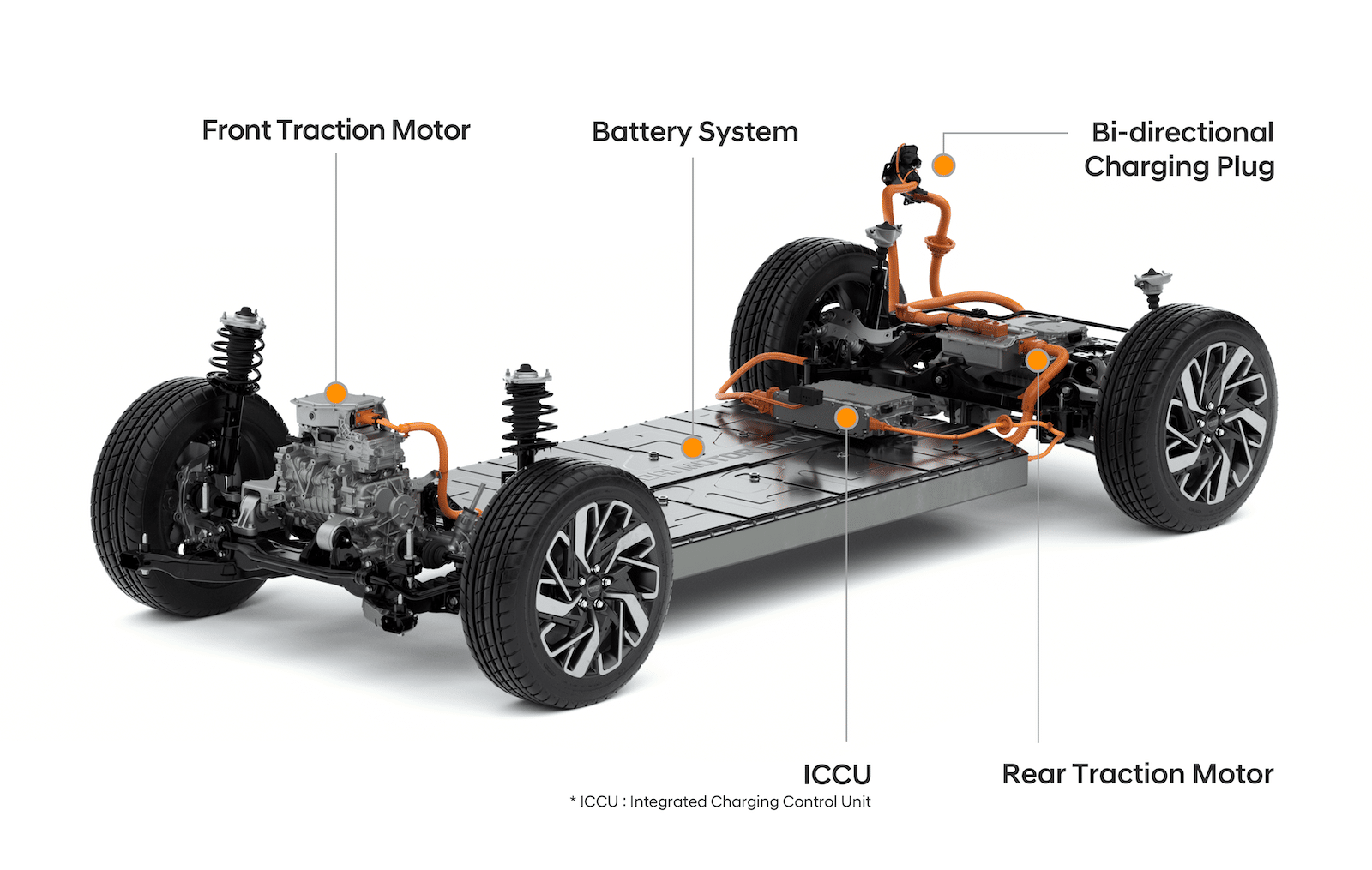 HMG also noted the Integrated Power Electric system it is developing will be able to plug into the latest, 800-volt chargers, allowing one of the new models to reach an 80% state of charge in as little as 18 minutes. Right now, only the Porsche Taycan can use such next-gen chargers, though the technology is expected to become more and more common over the course of the coming decade.

The new electrical architecture also will allow bi-directional power flow. That means the pack could provide energy, whether in the form of onboard plugs – say to power tools at a worksite – or even to serve as a backup generator should a motorist lose power at their home. Some BEV proponents envision using battery cars as part of a future “smart grid,” where they could remain plugged in when not in use, allowing a utility to draw energy during periods of peak demand. The batteries would be replenished as grid needs drop.

All told, Hyundai plans to have 23 different BEVs in production this decade. Some, like the Kia Niro and Kona EV, will be in form of vehicles offered with multiple powertrain options. But 11 of those products will be designed exclusively to run on battery power.