Finally, some real zoom-zoom for an otherwise compelling car. 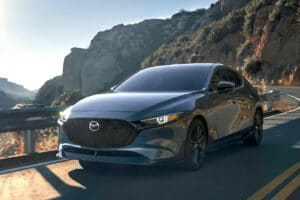 For 2021, Mazda took care of the one glaring weakness of the Mazda3: power.

Mazda has long been a bit of a conundrum for automotive enthusiasts. Its products generally offer great design, refined and well-equipped interiors and compelling vehicle dynamics. But they often fall short in one key category: powertrain performance.

That message finally made its way up to the powers-that-be at Mazda after the launch of an all-new Mazda3 in 2019. And it’s translating into a new turbocharged version of the compact Mazda3 for the 2021 model year.

Overview: The Mazda3 boasts one of the most striking designs in its class, whether you’re looking at the hatchback version or the sedan. And it features the sort of cabin refinement and features you’d expect of a more expensive entry-level luxury vehicle. Now, it is getting the sort of power and performance that had been missing from the equation. 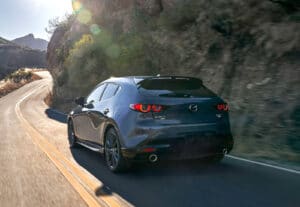 The new Mazda3 Turbo is a prime example of the automaker’s shift to the brand’s Kodo design language.

That should further enhance the appeal of a brand that just toppled the best in the industry, Mazda being named the number one marque in the new Consumer Reports 2020 Auto Reliability Index. While we’ll have to wait to see how the Turbo model holds up, the Mazda3 itself ranked Above Industry Average.

Exterior: The Mazda3 is a delightful expression of the automaker’s striking Kodo design language that won the car kudos as World Car of the Year – Design when it first came to market. Two years later it remains one of the freshest and most visually appealing products in its segment,

Our Madza3 Turbo hatchback features a long but low-slung nose that flows into a steeply raked windshield and coupe-like roofline. Cats-eye headlamps sweep into the front quarter panels which, in turn, flow into a gracefully sculpted silhouette.

The Turbo boasts a few subtle differences from the rest of the line, including both a front air dam and small roof spoiler, as well as a larger exhaust. The goal was to give the top-line version of the Mazda3 a refined and premium look. “We didn’t want to turn it into a boy racer,” emphasized designer Ken Seward. That said, a rear diffuser and side sills are available as options, as are BBS forged wheels.

Interior: During a small group web discussion, the Mazda team made it clear that they hope to go after premium competitors, such as Mercedes and Audi, with the Mazda3 Turbo, rather than mainstream alternatives such as Toyota or Hyundai. 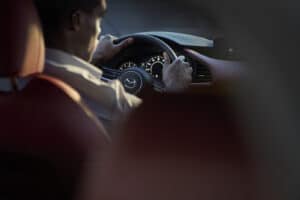 Mazda is looking to compete with luxury makers when it comes to its new interior in the Mazda3.

The interior largely lives up to that goal, the cabin of our Turbo hatchback swathed in two-tone leather. The layout fits the Mazda mantra of being a driver’s car.

One of the more curious decisions Mazda has made in recent years becomes immediately apparent, however, the Mazda3’s infotainment screen pushed back on the instrument panel well beyond easy reach. That’s because the Japanese automaker has decided to forego touchscreens in favor of using a large rotary control knob and shortcut buttons mounted on the center console, just behind the shifter.

Powertrain: For 2021, the Mazda3 now is available with three different powertrains: a 2.0-liter and a 2.5-liter option, both naturally aspirated, and the new 2.5-liter Turbo initially introduced for use on some of the marque’s larger models.

The package punches out as much as 250 horsepower and a solid 320 pound-feet of torque. That’s if you’re good with spending extra for high-octane gas. You can run the Mazda3 Turbo on 91-octane, however, if you’re okay with cutting power to 227 hp and 310 lb-ft. That’s still quite a bump from the 186 hp and 186 lb-ft the non-turbo version of the 2.5-liter engine pumps out. 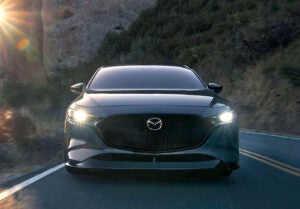 Another curious decision Mazda made was to pair the 2.5-liter turbo to a six-speed gearbox. The automaker needed something that could handle all the torque the engine makes while packaging it under the hood of the small car. Still, in a world where 8-, 9- and 10-speed gearboxes are the norm these days, it was a bit of a surprise.

Power goes to all four wheels, making the Mazda3 Turbo a bit more of a compelling alternative for those who might otherwise be looking at an SUV like the Mazda CX-30.

Technology and Safety: The decision to abandon touchscreens is the sort of quirky move those familiar with Mazda might expect from the brand. Personally, given the choice of a touchscreen or a well-engineered control knob, I prefer the latter. You don’t need to take your eyes off the road as often and it’s easier to do things like zoom in and out on a map.

You also have controls on the steering wheel for many functions and Mazda has made some necessary improvements to its traditionally balky voice-control system. Unfortunately, some operations, such as changing radio stations, can be oddly difficult. On the plus side, Mazda retained hard buttons for some frequently used functions, including seat and steering-wheel heaters. 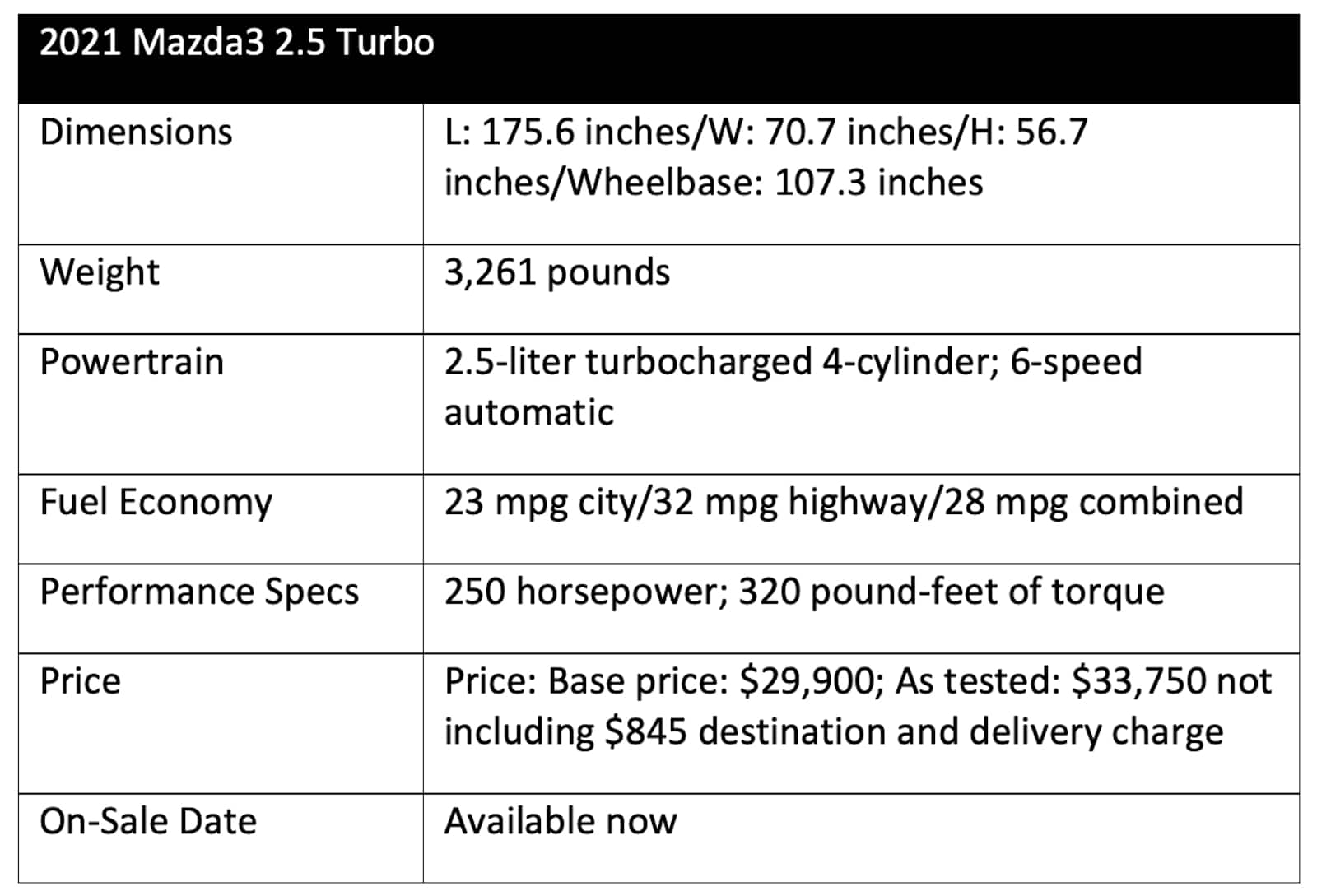 Drive Impressions: While the automaker might have abandoned its once-familiar zoom-zoom ad tagline, it has retained its emphasis on enthusiast-oriented drive dynamics. Even with the anemic 2.0-liter drivetrain, the Mazda3 could be a lot of fun whipping around corners.

The addition of the 2.5-liter Turbo largely fills in the power gap. Acceleration is linear and shows virtually no turbo lag off the line. It keeps pulling at highway speeds, making passes at 70 mph-plus is no problem.

Mazda engineers also did a great job on the acoustic front. There’s relatively little wind or road noise for a car in this class. But, crunch the throttle and you’re rewarded with a surprisingly deep burble, more V-8 than typical I-4 turbo. It clearly enhances the sense of acceleration. 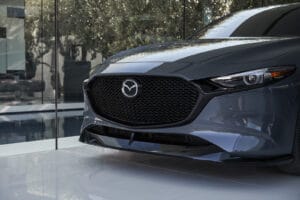 We’d have loved having a manual gearbox but, Mazda officials explained, they simply didn’t have one that could package under the hood of the small Mazda3 and still handle all that torque. They did say they’d be listening to shoppers for feedback, but we there seems little chance they’ll change their mind considering the way manuals are vanishing from the market. Unfortunately, the 6-speed auto they went with just doesn’t seem quite up to the job. It’s not a major complaint but more gears would seem to do a better job of finding the power sweet spot.

Handling, as with the base car, remains largely unassailable. The Mazda3 combines more power, great steering and the ability to negotiate tight corners with aplomb.

(Return of the rotary: Mazda will use Wankel as range extender for all-electric MX-30.)

Wrap Up: Even when it first came out there was a lot to like about the Mazda3. Now, with its added power, it becomes a much more compelling package. As with seemingly all Mazdas, there are a few quirks and eccentricities, but the 2021 Mazda3 Turbo is just plain fun to drive, offers a great design, a refined interior and lots of value for the money.

We question whether the brand has the cache to truly challenge the likes of Mercedes, Audi or Lexus, but for the price – which starts just under $30,000 – it’s an option potential buyers should consider closely.