“Consumers are now ready to adopt these new technologies.”

Hybrids, plug-ins and battery-electric vehicles collectively topped diesels in European registrations last month for the first time ever, with the trendline suggesting electrified vehicles will only continue gaining ground in the years ahead.

All told they accounted for just a hair over 25% of the 1.3 million cars and light trucks registered in 27 European nations last month, more than doubling their share in little more than a year, according to data gathered by research firm JATO Dynamic. Diesels accounted for 24.8% of European registrations, continuing the ongoing slide that has taken place since it was revealed that Volkswagen and some other manufacturers rigged emissions tests.

Gasoline-powered vehicles dominated the charts last month, accounting for 47% of the vehicles registered in Europe, but that number fell from 59% in September 2019, JATO reported.

“Consumers are … now ready to adopt these technologies,” JATO analyst Felipe Munoz said in the report, though he cautioned that while “the shift from ICEs to EVs is finally taking place” it is heavily influenced by “government policies and incentives.” 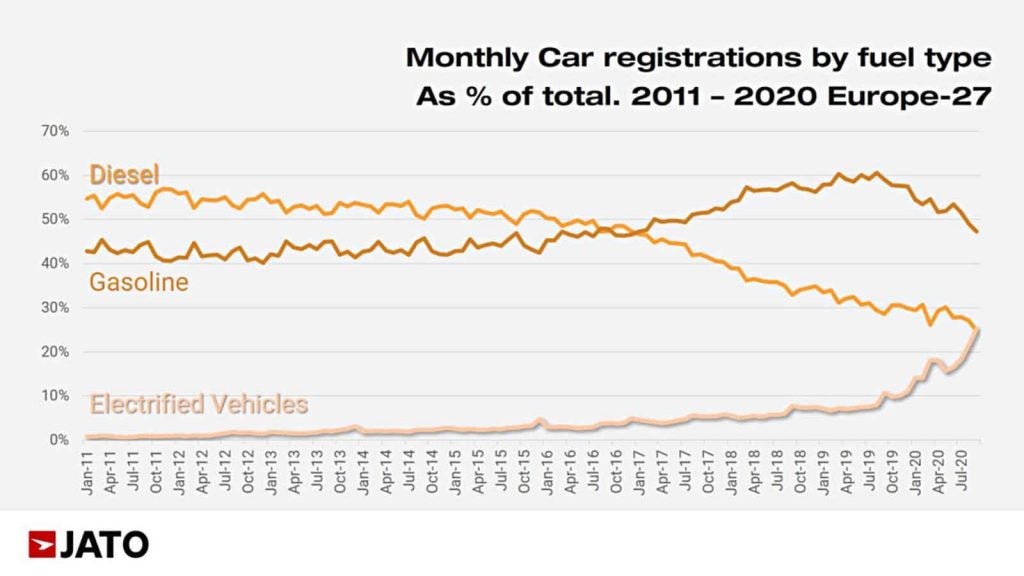 The European Union has enacted strict new mandates covering carbon dioxide emissions, production of that global warming gas is directly related to fuel economy. To meet those tough standards, automakers have been electrifying more and more of the vehicles available for sale in Europe, starting with mild and conventional hybrid technologies.

But demand for more advanced plug-based models, including both PHEVs and pure battery-electric vehicles, has been surging, as well, and JATO forecasts, will reach 10% of the European market for all of 2020, rising to 15% next year.

While hybrids carry less of a price premium, European motorists are coming to grips with the likelihood that a number of countries plan to ban the sale of vehicles using internal combustion technologies. Britain, for one, is considering a proposal to move such a ban up to 2030 from the original target of 2040. Separately, a number of cities on the Continent, including Paris, Hamburg and London, are moving to bar entry by vehicles not running in electric mode.

Regulators in various parts of Europe also have enacted financial incentives to help reduce the cost penalty of purchasing electrified vehicles, from cash to subsidies for energy. There’s also a push to set up a vast network of charging stations, as well as a fueling infrastructure for hydrogen fuel-cell vehicles.

(EVs on track to triple European market share this year.)

Whatever the reason, the JATO report found that demand for both gas and diesel vehicles posted a double-digit decline in September compared to year-earlier numbers. Just as significantly, while the overall European market has been struggling to rebound in the wake of the coronavirus pandemic, demand for electrified vehicles surged by 139% last month, to 327,800 vehicles, “a record in terms of both volume and market share.

“This is the first time that EVs have broken the 300,000 units monthly mark, and only the second time that they have counted for more than 20% of registrations,” JATO’s report added.

The decline of the diesel market has been relatively sudden. So-called “oil burners” had controlled more than 50% of the market for decades, in part due to European mandates that meant hefty fuel cost subsidies in many markets. But several factors have contributed to the decline.

For one thing, regulators no longer see diesels as the best solution to reduce carbon dioxide emissions. And both consumers and regulators have soured on the technology since it was revealed five years ago that Volkswagen had rigged diesel emissions tests – other automakers also admitting such moves since then.

Diesel registrations flittered around 50% through mid-2016 and, since then, have gone into a rapid and steady decline. The numbers crossed the rising surge of EV registrations in September and the gap is only expected to widen going forward, according to European analysts.

Ironically, Volkswagen, the company that helped trigger diesel’s downfall, has been faring quite well with the shift to electrified vehicles. It ranked second last month in registrations, behind only Toyota, the traditionally dominant player in the conventional hybrid segment.

VW also saw itself jump to the lead in the pure battery-electric vehicle segment, ahead of Tesla, with a 352% jump last month. That reflects the automaker’s launch of the ID.3, the first in a wave of BEVs it is developing. Tesla hopes to regain momentum, however, once it can launch production at a new plant outside Berlin next year.