Big outside, big inside – but the price tag is big, as well. 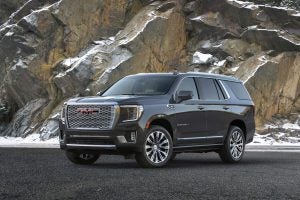 The difference between luxury and “Professional Grade” is even more difficult to determine with the 2021 GMC Yukon Denali.

One of the most common questions we get about the GMC brand centers around its curious positioning as “Professional Grade,” but not a luxury brand. That becomes even more difficult to differentiate when you slip behind the wheel of the 2021 GMC Yukon Denali. There are more than a few true luxury models out there that don’t offer the styling, performance and features of this big SUV, never mind the incredible roominess.

Overview: The GMC Yukon was something of an afterthought for many years, a slightly gussied-up version of the more familiar Chevrolet Tahoe. That began to change when, in 1998, the up-market brand introduced the Denali trim. Call it “Professional Grade,” if you wish, but this version of the full-size SUV handily compares with anything in its price range, and more than a few luxury models, as well.

That’s all the more the case this time around, all versions of the Yukon migrating to a new platform that – as with the 2021 Tahoe – adds about 7 inches in total length and another 5 inches of wheelbase. But, what’s equally important from a variety of angles, the new ute also gets a first-time independent rear suspension that translates into a more comfortable ride, improved on-road handling and significantly more room inside, especially for the third row. 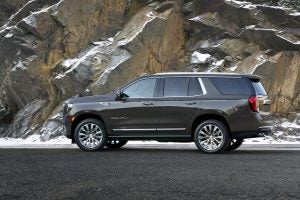 The 2021 GMC Yukon Denali is nearly as long as the Chevrolet Suburban of just a few years ago.

While Denali originally was marketed as a “limited-edition” trim level, more than half of all buyers are expected to opt for it looking ahead. But for those who want a reasonable level of luxury – er, professional grade – features, there is an option to consider, the more off-road-oriented Yukon AT4.

Exterior: At first glance, you might confuse the 2021 GMC Yukon with the old Chevrolet Suburban, it has grown that much longer. And we’re not even talking about the extended-length Yukon XL. Just about everything seems bigger than before, from the more upright face, with its massive grille, to the long hood and stretched greenhouse. The overall look is formidable, especially with the 22-inch wheels and tires, almost locomotive-like. Drive up on another vehicle’s tail on a freeway and you’ll be surprised how quickly they move out of the way.

“… One thing we appreciate about the 2021 makeover is the way GMC has tried to differentiate Yukon from the Chevy Tahoe….”

It may be bold, but it has a more refined look to the latest makeover, especially the Denali with elegant chrome adding a more upscale accent. 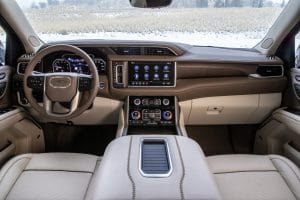 The new Yukon Denali offers plenty of room as well as plenty of high-end touches.

Interior: This is where the new Yukon Denali really moves up-market, albeit with a couple weak points. The cabin features upholstery unique to the GMC brand, for one thing, along with accents, such as aluminum trim, you won’t find in the Chevy. Unfortunately, GMC probably hoped we wouldn’t notice that some of the buttons and switches are clearly shared between Yukon and Tahoe.

But the GMC certainly has a lot going for it, including the 8-inch digital display, the 15.2-inch touchscreen  and what is clearly one of the largest – if not the industry-biggest – head-up display screens. There also are 12.6-inch entertainment screens built into the headrests for second-row passengers. While there are no third-row screens, chances are the kids back there will be using the SUV’s built-in WiFi system to watch videos or play games on their portable devices.

And, if you’ve banished any adults to the back bench, don’t worry. Thanks to the new suspension the load floor is lower, so no knees up around shoulders. And third-row legroom grows by an astonishing 10.1 inches. At the same time, there’s a whopping 66% more cargo space behind the third row. 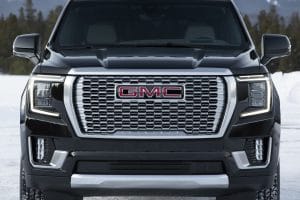 The new Yukon Denali offers a 6.2-liter V8 that provides smooth power and is mated to a 10-speed transmission.

Powertrain: While there are several drivetrain options across the 2021 GMC Yukon line-up, including the base 5.3-liter V-8 and the 3.0-liter diesel being added in the months to come, all Denali’s share GMC’s 6.2-liter V-8. It punches out a sold 420 horsepower and 460 pound-feet of torque through a quick-shifting 10-speed automatic transmission.

That provides plenty of power to handle the added cargo the 2021 Denali can stuff inside, as well as the 8,200 pounds of towing capacity it’s capable of hauling. That’s enough for one serious boat or trailer.

As with the Yukon AT4, the Denali makes all-wheel drive standard issue. It’s an option on other trim levels.

Technology and Safety: The new Denali is loaded with high-tech features, notably including the massive HUD and infotainment displays. There’s also an onboard WiFi system for those who prefer using their own digital devices. Meanwhile, the independent, second-row screens, built into the headrests of the front seats, have dual HDMI inputs so you could feed in a portable DVD, a laptop or even streaming devices like a Roku or Fire TV stick. The SUV also boasts USB ports pretty much everywhere you look. There’s also twin 120-volt plugs for appliances or household devices. 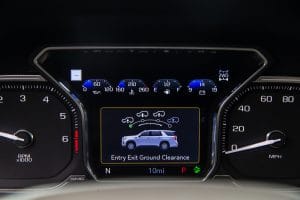 The new Yukon features a slew of driver assistance technologies.

As for safety gear, there are plenty of airbags and nanny features, such as electronic stability control. The 2021 GMC Yukon Denali also gets an array of newer driver assistance systems, including forward collision warning with pedestrian detection and auto braking, lane change alert, rear cross traffic alert and more.

Drive Impressions: The Denali’s big V-8 can make you forget you’re driving something anywhere near this big. It’s quick and responsive and the 10-speed automatic is almost transparent, with barely detectible shifts and an uncanny ability to almost always be in the optimum gear.

Despite its size, the 2021 Denali also delivers good road manners, enhanced by both the new independent rear suspension and the magnetic ride control dampers that can switch from hard to soft – or anywhere in-between – in the time it takes to travel less than two inches at 60 mph. The one negative is a bit of juddering on uneven pavement, especially concrete, at highway speeds.

Steering is a lot more manageable than with the old Denali, there’s less need to constantly be correcting the wheel and you have a better sense of where the SUV is pointing in a turn. The brakes, meanwhile, appear well up to the task, though we didn’t have a chance to experience what it’s long towing a heavy load.

Wrap Up: The 2021 Yukon Denali has an imposing presence. It’s big and bold, but when you slip inside you might forget just how big it really is. It is far more comfortable and far less lumbering than past-generations.

There are a few niggling complaints, such as the Chevy-derived switches. And the price for a well-equipped Denali – like the one we drove, topping $80,000 — can take your breath away if you weren’t expecting a figure clearly in the luxury category.

That said, if you’re the type that tows heavy loads and wants lots of room and comfort getting from Point A to Point B, the Denali should be on your shopping list. 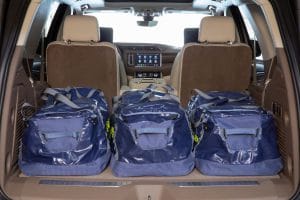 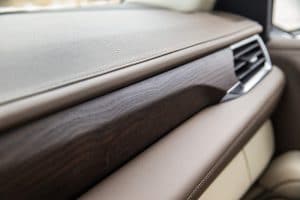 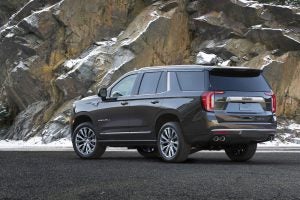