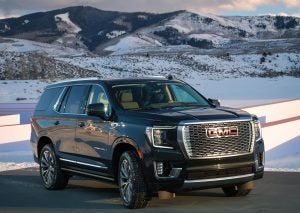 GMC unveils its next-generation 2021 Yukon, as well as the big Yukon XL and high-line Denali.

GMC is giving us a look at the largest SUVs in its line-up, the 2021 Yukon XL – along with the highline Yukon Denail — just a month after sibling brand Chevrolet pulled the wraps off its own take on full-size utility segment.

As has been the case over the last few years, the brands have been pushing to deliver more differentiation despite sharing the same underlying platforms. That comes both in the form of design and features, GMC aiming for more upscale – or, as it likes to call them, “profession grade” – buyers.

Among other things, that minds a first-in-segment four-corner Air Ride Adaptive Suspension, as well as a new “Active Response” all-wheel-drive system that promises to be quicker to cope with unexpected issues like black ice. There’s also a power-sliding center console. But GMC also is betting SUV buyers will appreciate less high-tech upgrades, including significantly more passenger and cargo space.

The 2021 GMC Yukon, for example, adds five inches to its wheelbase and grows 6.1 inches overall compared to the outgoing model. Among other things, that yields a full 41% increase in legroom for the third row where passengers will now be less likely to view themselves as stuck in the penalty box. The Yukon also adds 66% more cargo space with the third row up. 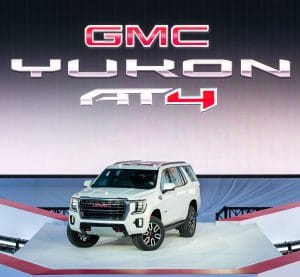 The 2021 GMC Yukon will be available in off-road AT4 trim for the first time.

As for the big Yukon XL – GMC’s take on the more familiar Chevy Suburban – it gets another 4.1 inches of wheelbase, though overall length is stretched by a more modest 0.9 inches. Nonetheless, third-row legroom jumps by 2.2 inches and the people hauler now boasts 144.7 cubic inches of cargo space, an increase of 23 cf. To make it easier to reach the rear, GMC has added an optional sliding second-row seat.

As we saw with Chevy’s big SUVs, the new GMC models make some significant changes in exterior styling. Some sources suggest that what we’re seeing will influence mid-cycle updates of the GMC Sierra and Chevrolet Silverado pickups – both of which have been faulted for conservative, even stodgy styling.

This time around, Denali gets its own, unique interior – with four distinct color themes available. Among other things, that includes special seats, a high-definition Surround View camera, a 15-inch Head-Up Display and the latest version of the Magnetic Ride Control system.

(Chevy Suburban gets a star on the Hollywood Walk of Fame) 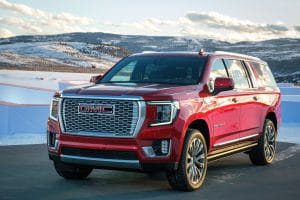 All versions of the Yukon grow longer and gain more passenger and cargo space.

The Denali trim is celebrating its 20th anniversary, and though it is now offered virtually across the GMC line-up, the Yukon version is considered its flagship. Meanwhile, the SUV also offers an off-road-oriented AT4 package for the first time.

Visually, it’s distinguished by a new front fascia design, dark chrome accents and red recovery hooks, as well as 12-spoke wheels and 20-inch Goodyear all-terrain tires. But the AT4 is more than just an appearance package. It gets a four-corner adaptive air suspension adding two more inches of ground clearance, a selectable traction system, hill descent control and skid plates.

Three engine packages are being offered for the Yukon family, including a new version of the 6.2-liter V-8 which, at 420 horsepower and 460 pound-feet of torque, is the most powerful option in the segment. The standard option is a new 5.3-liter V-8. But, for 2021, GMC is adding a new 3.0-liter inline-six turbo-diesel, as well. All three engines are paired with a 10-speed automatic with push-button gear select.

More powertrain specs are expected to be released closer to the on-sale date for the trucks, along with pricing. That’s scheduled for summer 2020.