California Plans to Ban Sales of Gas-Powered Vehicles by 2035

The State of California, in a move that is certain to kick off a major legal, philosophical, economic and political row, plans to ban the sale of motor vehicles that use gasoline or diesel fuel by 2035 as part of its effort to reduce carbon dioxide emissions that contribute to climate change and global warming.

The announcement by Governor Gavin Newsom comes amid a tumultuous period in California where record high temperatures and a lengthy drought exacerbated the state’s changing climate, leading to fires that scorched millions of acres from the suburban edges of Los Angles to pristine wilderness in the High Sierras.

The fires that destroyed mountain communities that survived for decades and forced thousands of Californians to flee the danger, have also taken a major toll on the economy of the state that sits at the center of U.S. car culture. 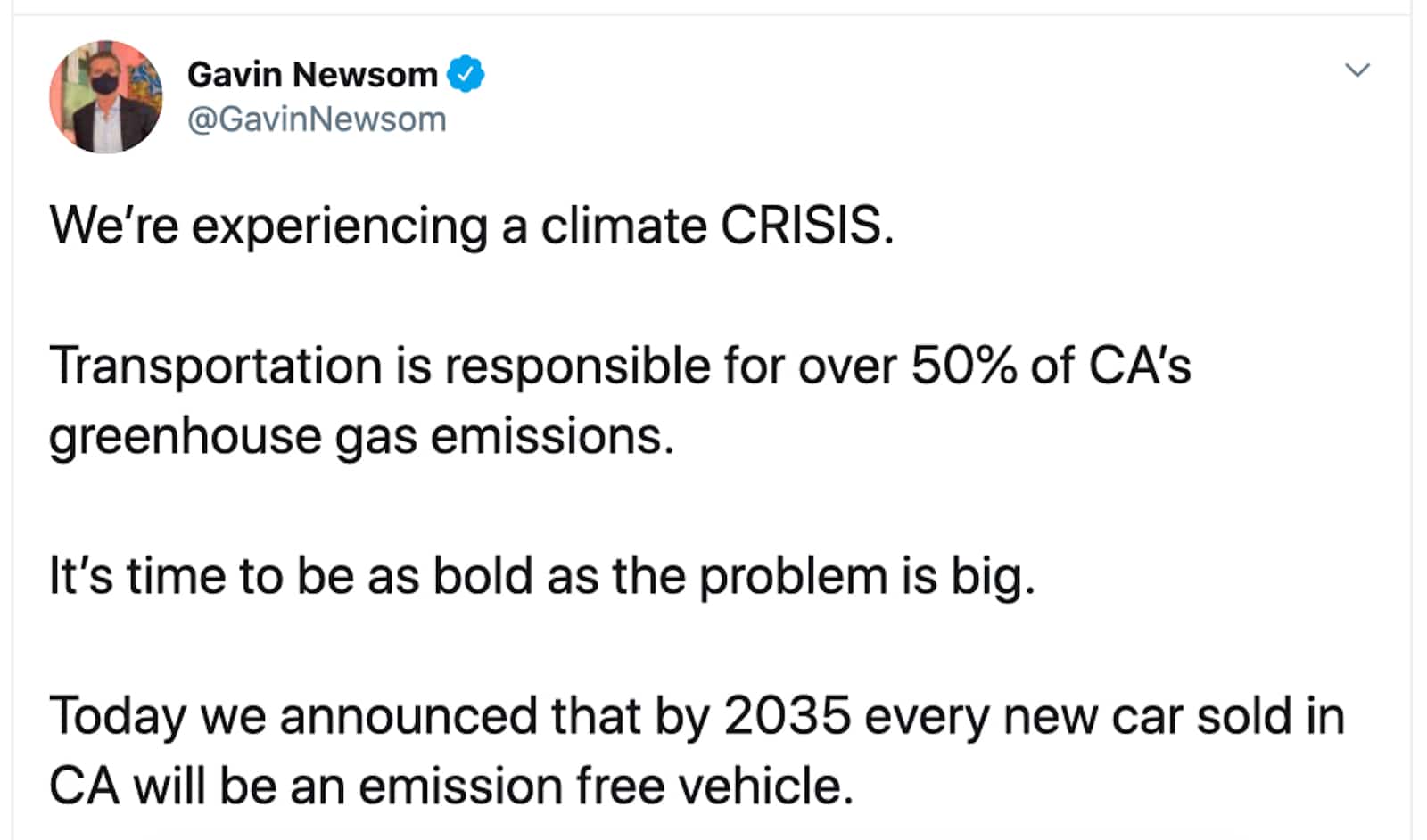 “We’re experiencing a climate CRISIS,” Newsom said via twitter. “Transportation is responsible for over 50% of CA’s greenhouse gas emissions. It’s time to be as bold as the problem is big.

“Today we announced that by 2035 every new car sold in CA will be an emission free vehicle,” added Newsom, who speaks for more than a dozen other states that follow California’s lead on controlling emissions from car and trucks.

Carmakers from the U.S., Asia and the Europe are preparing for a future where electric vehicles become the prevailing form of both commercial and personal transportation.

In the U.S., the Trump administration has ordered federal fuel-economy standards rolled back despite the objections of the State of California, which has gone to court to protect its tougher emissions regulations. The Trump administration also has withdrawn from the Paris climate accord, which set a series of voluntary curbs on greenhouse emissions by nations around the globe and other efforts to slow climate change.

Newsom’s political mentor, former California Governor Jerry Brown, was an ardent supporter of the Paris accord. California, by itself, is the world’s fifth-largest economy and Brown said it was capable of fashioning is own agenda, independent of the Trump, administration, to fight climate change. 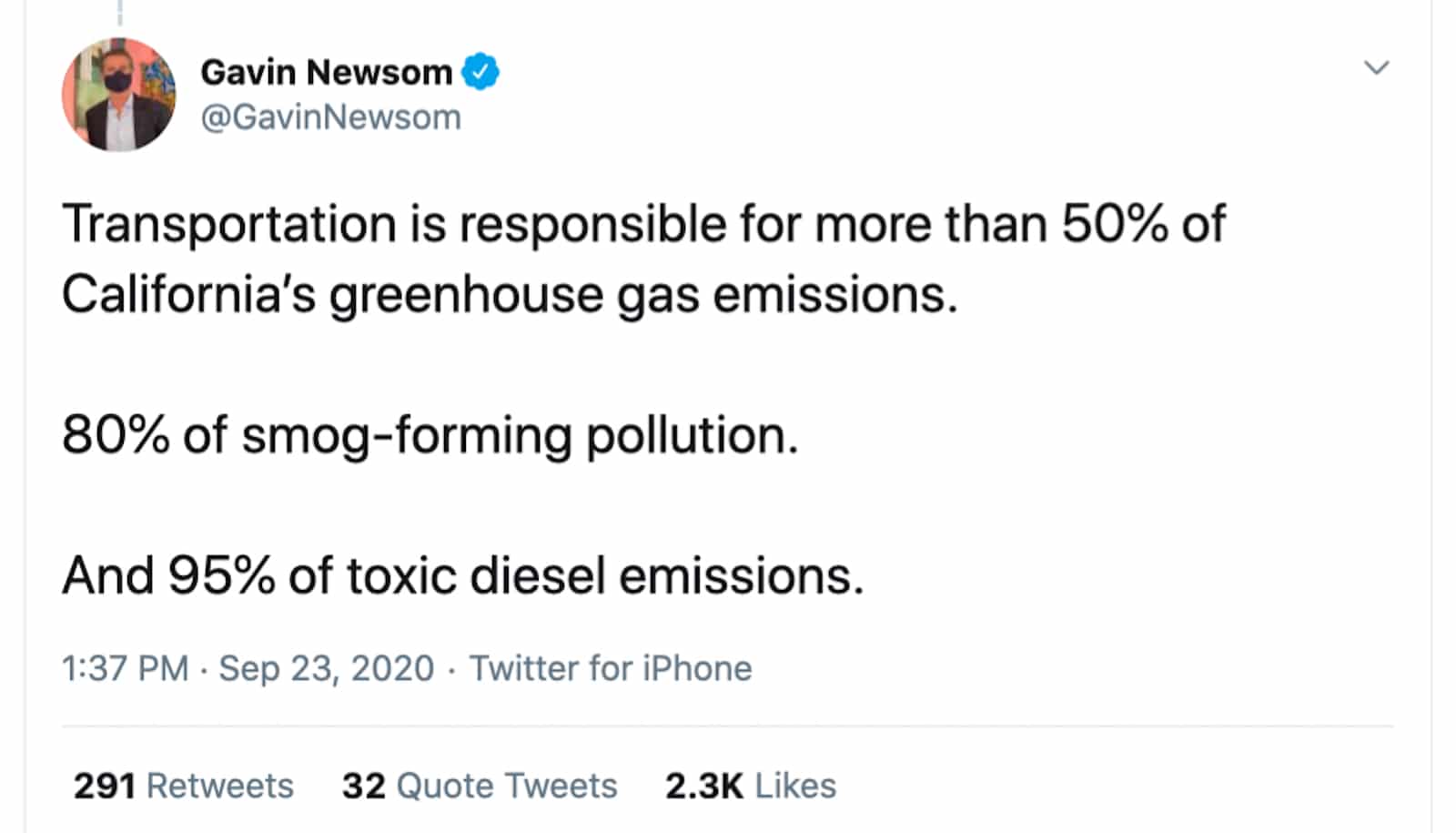 Newsom has followed in Brown’s footsteps and blamed the devastating fires across the state on climate change and the ongoing failure to address the issue.

(UK latest to lay out ban on gas, diesel vehicles.)

Meanwhile, companies such as Volkswagen, BMW and Volvo are quickly bringing on new electric vehicles, while tough new restrictions in Europe are spurring sales of EVs. Meanwhile, the British government is considering accelerating a ban on sales of new gasoline-powered vehicles in the United Kingdom from 2040 to 2030.

Some automakers have supported the Trump administration’s effort to roll back the California standards, saying they prefer “one national standard.” However, several others, concerned by the administration’s lack of finesse, reached separate agreement with California.

One major concern for the American companies is losing a technological race to Asian and European carmakers pushed by their governments to have EVs take over from vehicles with gasoline and diesel engines.

However, even if Trump should lose the election and the incoming Biden administration scuttles the push to roll back the fuel-economy standards, other groups, such as car dealers and diesel engine builders are very likely to take up the fight and neutralize California’s efforts to ban the sale of gasoline-powered vehicles. 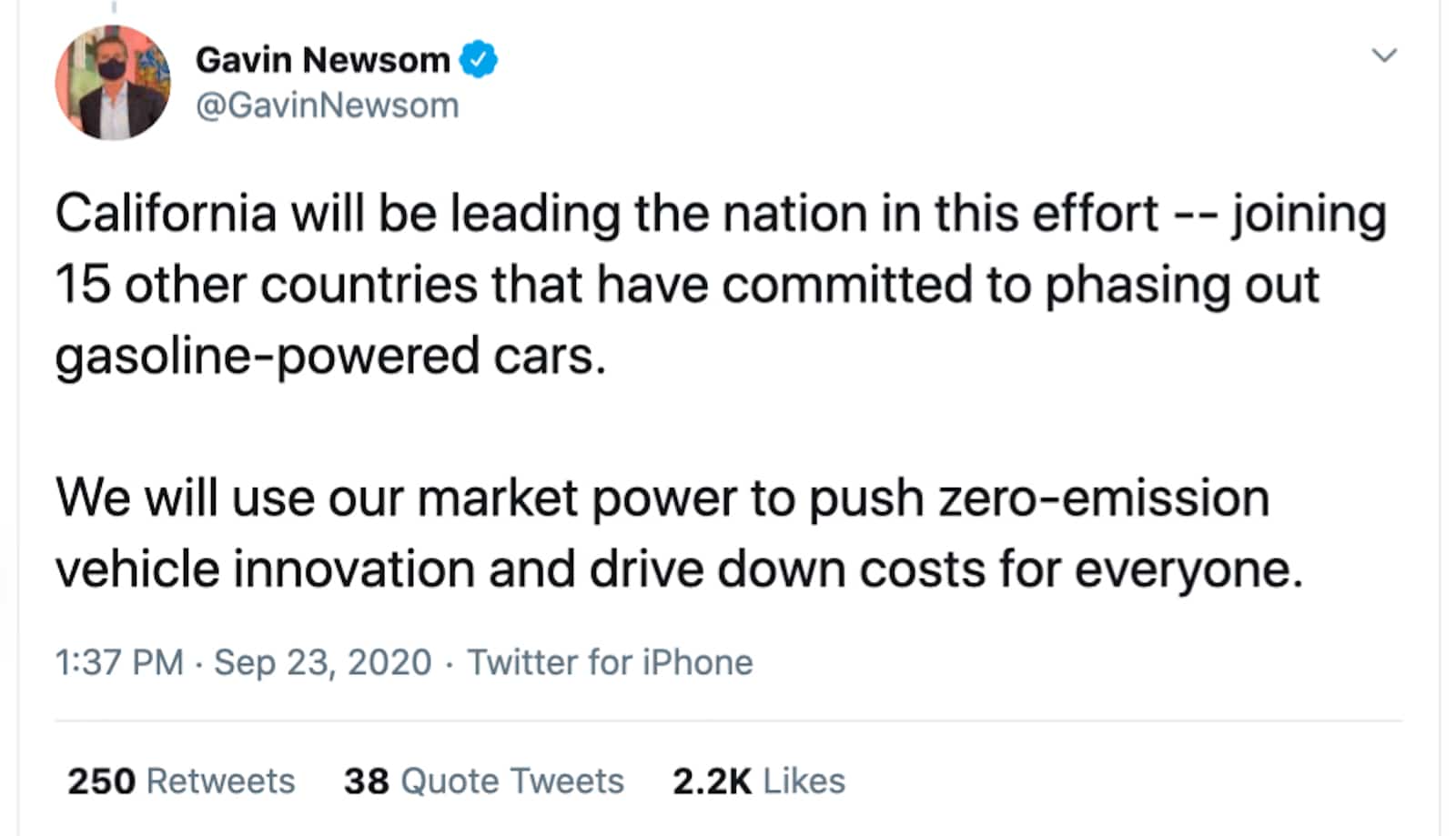 Ultimately, the case easily could wind up in front of the U.S. Supreme Court where justices will have to grapple with the legacy of Judge Anton Scalia, the patron saint of conservative jurisprudence.

California has long had the authority to write it own clean-air rules. The authority was reinforced in 2007 in a major case, Massachusetts vs EPA, in which the court overruled the Bush administration and said that states had the right to regulate the emissions of greenhouse gases.

In the years before his death 2016, Scalia argued the majority opening in Massachusetts was wrong and should be reversed. Scalia’s position has been echoed by many of Scalia acolytes now scattered across the federal judiciary.