Makers looking to add functionality for their pickups. 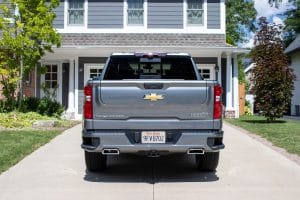 Chevrolet Introduced the six-position Multi-Flex Tailgate on its 2021 Silverado.

The battle of “tailgate technology” rages on with General Motors making its Multi-Flex tailgate previously only available its GMC Sierra full-size pickup, an option for its Chevrolet Silverado for the 2021 model year.

The six-in-one tailgate is trickling down from its debut as the MultiPro tailgate in 2019 on the GMC pickup. Like it’s upscale partner, it can be opened and closed using the truck’s key fob. However, it can be opened up in different ways to allow longer objects to fit in the bed more easily or create a step allowing someone easy access to getting up into the bed.

Additionally, there’s an additional piece that can be folded back to stop cargo from moving around in the back. The Silverado and Sierra are hardly the only trucks with these “clever” tailgates. However, the move to offer more functionality has ramped up in recent years.

(The pickup truck battle of the tailgates.) 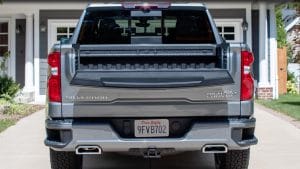 Ford, which may have started the whole competition several years with its step and grab handle integrated into the tailgate, now offers Tailgate Work Surface on its 2021 Ford F-150. Each truck comes standard with new cleats mounted to the sides of the tailgate to act as tie-down locations for extra-long items in the bed.

For 2020, Ram 1500’s available multifunction tailgate features first-of-its-kind 60/40 split swing-away doors that open 88 degrees, making it easy to load bulky items, unload and wash out the bed and allows for easy forklift loading. With one quick push of the foot, the available Mopar bed step deploys from underneath the rear bumper to offer a firm foothold.

The Honda Ridgeline also features a tailgate that opens conventionally as well as gate-style to make it easier to load the truck bed. Even Rivian has its own unique take on the tailgate as the one on the RT1 folds all the way down: 180 degrees. 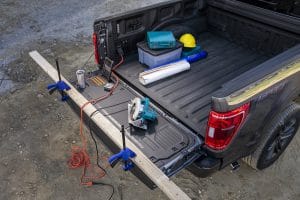 Ford is also one of many makers looking to add more functionality to its tailgate.

Tesla Cybertruck will be able to support extended-length cargo via a flip-up load stop on its tailgate, according to CEO Elon Musk. The 6.5-foot long tailgate can be extended to accommodate sheets of plywood, which are 8 feet long.

Additionally, it can be folded down and extended to act as a ramp to allow things like an ATV or motorcycle to be loaded by simply rolling them up the makeshift ramp.

Hyundai Santa Cruz is finally a go for production, though the Korean carmaker has yet to reveal how the retail version will differ from the widely hailed concept pickup. One of the features that won the prototype raves was its extendable bed, the tailgate able to slide rearward to add significant additional cargo space. We may not know more for a while, the production Santa Cruz not scheduled until 2022.