Hyperion XP-1 is a Hydrogen-Powered Hypercar

It can get you where you want to go fast - as long as you know where there's a pump. 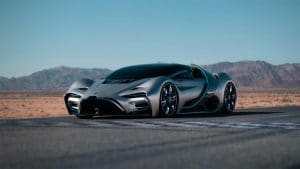 We’re seeing plenty of battery-powered hypercars lately, like the Rimac Concept Two and the Pininfarina Battista, but California’s Hyperion is taking a very different to going green with its new XP-1.

Formally unveiled today, the startup’s first entry opts for hydrogen power and, Hyperion claims, boasts same real advantages over battery-powered alternatives. Not only can the hypercar launch from 0 to 60 in a mere 2.2 seconds, but it will get as much about 1,000 miles on a tank – which is great news considering there aren’t many places where it can fill up on the lightweight gas.

“Aerospace engineers have long understood the advantages of hydrogen as the most abundant, lightest element in the universe and now, with this vehicle, consumers will experience its extraordinary value proposition,” proclaimed Hyperion CEO Angelo Kafantaris with the release of a video showing the Hyperion XP-1 in testing. “This is only the beginning of what can be achieved with hydrogen as an energy storage medium. The potential of this fuel is limitless and will revolutionize the energy sector.” 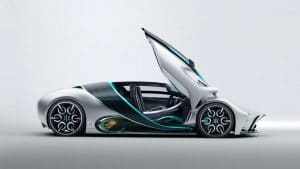 The XP-1 uses a hydrogen fuel-cell stack but likely also has at least a modest battery pack, as well.

The fact that Kafantaris said the hypercar “was partially designed to function as an educational tool for the masses” raises some questions about Hyperion’s actual goals. The startup is also working in the aerospace and energy industries, it turns out. Nonetheless, the company, based in Orange, California, has been teasing the XP-1 for some time and promises to have it in production in 2022.

We’ve already seen the potential for powering automobiles using hydrogen. Hyundai now offers the Nexo, while Toyota has the Mirai, and Honda uses the gas for one of its versions of its Clarity model. Toyota, as well as newcomer Nikola Motors, are meanwhile developing hydrogen-powered trucks, all the way up to Class 8 semis. 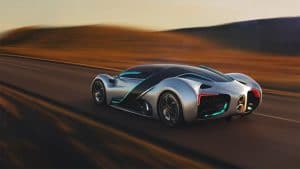 The Hyperion XP-1 can store enough hydrogen to travel 1,000 miles between fill-ups – but finding the next pump could be a challenge.

Though hydrogen can be substituted for gasoline in a modified internal combustion engine – an approach BMW has experimented with – the preferred approach is to feed it into a fuel-cell stack where it combines with oxygen from the atmosphere to produce a flow of electric current, water vapor its only exhaust.

The approach, according to advocates, has some advantages compared with batteries in terms of weight and potential range, as well as performance in extreme temperature conditions – though not everyone is impressed, Tesla CEO Elon Musk calling them “fool cells.”

If there is one clear drawbacks it’s that there’s an even more limit infrastructure for hydrogen than for battery cars. According to the U.S. Energy Information Administration, there were just 60 pumps open to the public at the beginning of the year, though California and a few other states hope to add still more in the coming years – and Nikola is promising to set up a network of its own to back the launch of hydrogen trucks like its Nikola One. 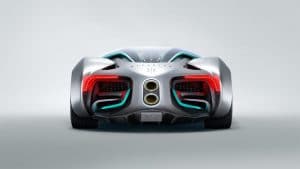 Hyperion will launch the XP-1 in 2022 but hasn’t yet revealed pricing.

Hyperion isn’t offering details about the XP-1’s drivetrain but it is a fair bet that the system does have at least a small lithium-ion battery pack onboard to help recapture waste energy and to add more power when a driver’s foot is glued to the floor – the approach taken with other, more mudane fuel-cell vehicles like Hyundai’s Nexo.

What the company does note is that the hypercar features active aerodynamic panels which, it says in a statement, “envelope each side of the vehicle to improve cornering at high speeds. Additionally, these elements double as solar panels, which can articulate to follow the trajectory of the sun.”

That’s fitting, considering that Hyperion was, according to Greek mythology, the god of heavenly light. Yet again, the use of solar panels suggest some energy is stored in a battery.

Hyperion notes some of the technology used in the XP-1 was derived from space flight programs it has participated in with NASA. It also said in its news release that production of the Hyperion XP-1 will take place in the U.S.