Fiat Chrysler Strikes Back at General Motors in Court Filing

GM sticking to its guns in latest round of filings.

Fiat Chrysler Automobile N.V. fired back at General Motors Co. in a filing that is part of the contentious lawsuit that has seen GM claim that FCA had conspired with key officials from the United Auto Workers to undermine GM’s competitive position during the past decade.

“GM’s proposed amended complaint is the latest example of the lengths it is prepared to go to, attacking a competitor that is winning in the marketplace with yet more baseless accusations,” FCA said in a statement.

“As we have said from the date this lawsuit was filed, it is meritless, and we will continue to vigorously defend ourselves. GM’s attempts to tarnish FCA’s reputation and that of individual FCA officers and employees will not distract us from our mission of providing customers with outstanding and exciting cars, trucks and SUVs or from completing our landmark combination with Groupe PSA.

“GM’s proposed Amended Complaint reads like a script from a third-rate spy movie, full of preposterous allegations that FCA paid not one, but two, ‘mole[s]’ to ‘infiltrate GM’ and ‘funnel inside information to [FCA]’ using money ‘stashed’ in a ‘broad network’ of ‘secret overseas [bank] accounts.’ None of that is true,” wrote attorneys for the Auburn Hills, Michigan-based automaker, in its response to GM’s latest court filing.

GM contends that it’s sustained more than $1 billion in damages due to FCA and UAW’s “scheme.”

“That GM has extended its attacks to individual FCA officers and employees, making wild allegations against them without a shred of factual support, is despicable,” FCA added in the court documents filed in the petition GM filed last week.

“Should this Court alter or amend the judgment dismissing GM’s Complaint with prejudice to permit GM to file its proposed Amended Complaint, where GM merely repeats the already rejected argument that the Court applied an unduly ‘strict’ standard for pleading causation under the Racketeer Influenced and Corrupt Organizations Act; misrepresents the standard for leave to amend, and casts baseless aspersions on FCA that are completely unsupported by any well-pled factual allegations, and do not change the fact that GM’s causation theory remains too indirect and contingent upon harm allegedly incurred by others,” said in its filing.

Former UAW president Ron Gettelfinger said in an angry statement last week that GM’s claims that he and members received payments through foreign bank accounts were false and defamatory. Gettelfinger is not a party to the lawsuit nor has he been implicated in the ongoing federal criminal investigation in the UAW that served as the basis for the lawsuit GM originally filed last month. 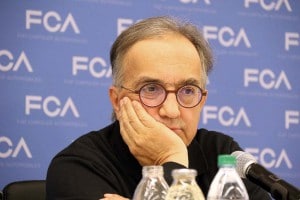 After his suggestion GM Chairman Mary Barra and FCA CEO Mike Manley meet in person to settle their differences was rejected by General Motors, Paul Borman, the judge from U.S District Court for the Eastern District of Michigan, granted the motion by FCA’s lawyers to dismiss the case. Borman earlier described the case as a “waste of time.”

GM, despite antagonizing the UAW and drawing harsh comments from the trial judge, said it stands by its lawsuit and the new affidavits that describe a broad conspiracy in which the late FCA CEO Sergio Marchionne used an array of foreign bank accounts to bribe union official and harm GM’s competitive position.

(GM pushes for round two in legal battle with Fiat Chrysler.)

GM contends the conspiracy has cost it more than $1 billion.