Ramping up towards production. 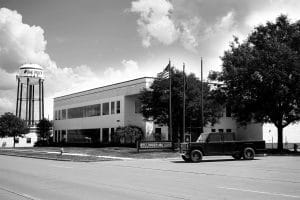 Bollinger Motors’ new HQ will offer much-needed space to increase its workforce during the pandemic.

Bollinger Motors, the small Detroit electric vehicle startup, is getting a bit bigger as it “ramps up towards production” and moves to a new headquarters.

Launched by Robert Bollinger, a serial entrepreneur who has had a decidedly eccentric career in marketing, advertising, organic hair care products and natural farming, the company is working on both a heavy-duty electric SUV and pickup, the B1 and B2. The company had been running with a sparse workforce, outsourcing some key operations, but had planned to increase staff before the coronavirus pandemic hit.

The short move from the Detroit suburb of Ferndale into a significantly larger one in nearby Oak Park “couldn’t have come at a better time,” Bollinger said in a statement. “We were bursting at the seams with new engineers, putting desks out in the shop at the old building; it was especially difficult to keep everyone more than six feet apart.” 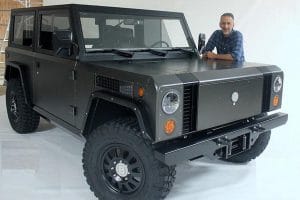 Bollinger Motors founder Robert Bollinger wanted an electric truck — so he made one.

Even now, the company’s operations are modest in size, Bollinger predicting its team will double in number to around 40 by the end of this year.

What Bollinger isn’t confirming is a hard date to launch production, however. In an interview last March, the company’s founder told TheDetroitBureau.com that the target was “2021, yeah, before the end of the first half of the year.”

As with other manufacturers, Bollinger is struggling to keep things on target due to the pandemic. Complicating matters is the fact that its development efforts are reliant on partners who also must cope with the impact of the disease. 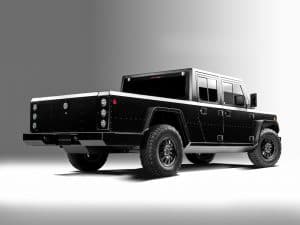 The B2 pickup is big enough to handle a 16-foot board with the tailgate up, using a cabin pass-through.

The initial product line-up, according to the company, will include the all-electric B1 Sport Utility Truck and B2 Pickup Truck, as well as the B2 Chassis Cab variant and Chass-E, the latter similar to the chassis versions of conventional trucks like the Ford F-Series that can be outfitted with a variety of different bodies for use as everything from shuttle buses to tow trucks.

Unlike products such as the Tesla Cybertruck and the GMC Hummer, the Bollinger B1 and B2 models will fall into the Class 3, or heavy-duty market segment, meaning gross vehicle weights of between 10,000 and 14,000 pounds. They are decidedly boxy, with few curves and plenty of right angles making them even more aggressive looking than the Tesla pickup. They are large enough to fit a 16-foot board inside using a pass-through.

Power, meanwhile, will come from a 120 kilowatt-hour lithium-ion battery. Bollinger has not revealed details such as performance, but range is expected to be at least 200 miles per charge.

Longer-term, Robert Bollinger said in his interview, “We hope to come back and do a two-door (version of the B1 SUV for mainstream) consumers. And we do plan variations (of the B1 and B2). We can make versions for firefighters and for short-term towing. We’ve got tons of options.”