Nissan Ariya Aims to Pick Up Where Fading Leaf Leaves Off 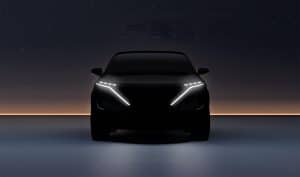 A little Photoshop magic pulls some additional details of the production Nissan Ariya out from the shadows.

Nissan has the distinction of bringing to market the world’s first mass-market battery-electric vehicle and, for the better part of a half-decade, the Leaf was also the best-selling battery-car. But times have changed, especially with the arrival of Tesla which now dominates the BEV market.

Despite a complete makeover and a significant increase in range, demand for the Nissan Leaf has tumbled sharply, a downturn not only reflecting the increase in competition but the broader U.S. market shift from passenger cars to SUVs and CUVs. So, the automaker could be hitting the market with a second BEV at not only the right time, but also with the right shape.

Look for the 2021 Nissan Ariya to make its formal debut during an online event on July 15. The production model will be based on a slick CUV concept that made its own debut at the Tokyo Motor Show last October.

For the moment, Nissan is offering only some carefully controlled teaser images, such as the lead pic on this story which we enhanced slightly to bring more (real) details out of the shadows. 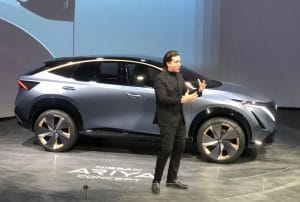 The design of the new battery ute will be far less quirky than the original Nissan Leaf, reflecting a market shift away from the design trend first put in play by products like the Toyota Prius.

That said, there will be some distinct features that reflect the Ariya’s battery drive technology. That includes its relatively short nose. With the powertrain and battery-pack located below the load floor, there is no need for a big engine compartment. Instead, there’s more space for a passenger compartment — as well as a small “frunk,” or front trunk, under the hood.

So, even though Ariya’s footprint will be slightly smaller than that of the latest Nissan Rogue, expects it to have a class-above interior from a size perspective.

Aerodynamics remain critical, so expect to see plenty of subtle detailing to cut wind resistance, such as the lack of a conventional grille, as well as a rear spoiler, as with the Ariya concept. 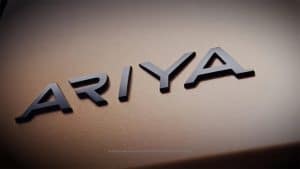 Ariya will be the first model to use Nissan’s twin-motor e-4ORCE electric platform.

The large wheels on the concept, shown with Albaisa here at CES, may be the most distinct casualty of the switch to production.

Some of the technical features on the concept won’t carry over, either, Nissan insiders told us, notably the show car’s autonomous drive system — though the retail Ariya will get a significant update of Nissan’s current ProPilot 2.0 driver assistance system.

More importantly, expect a significant jump in range. The original Nissan Leaf could barely muster 100 miles per charge. The second-generation delivers anywhere from 150 to 226 miles, according to the EPA. But, these days, with Tesla routinely approaching 300, and topping 400 on its latest long-range Model S, Nissan is expected to push even higher with Ariya. Few would be surprised if it offers multiple battery-pack options that could nudge 300 in one or another version,

The drivetrain will jump from the single motor on Leaf to twin motors, one on each axle. The all-wheel-drive e-4ORCE platform, incidentally, is expected to be shared with other Nissan products in the pipeline, as well as with the automaker’s alliance partners Renault and Mitsubishi. 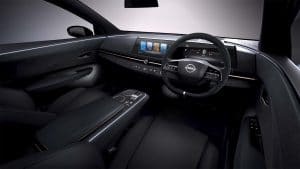 The 2021 Nissan Ariya will arrive at a time when the market is starting to see a wave of new “affordable” battery-electric vehicles, including the likes of the Hyundai Kona EV, the Chevrolet Bolt, the new Tesla Model Y, the Ford Mustang Mach-E and the Volkswagen ID.4. Expect to see it come in around the same base price, somewhere in the $35,000 range.

One drawback for Nissan is that it will be watching its federal tax credits phase out, as has already happened to Tesla, after crossing the sales threshold set by Congress.

Nissan has long tried positioning itself as a leader in the battery-car market. And that was a valid claim until Tesla started volume production. The Leaf has been losing momentum rather rapidly, demand falling 16.0% from 2018 to 2019, and then tumbling another 27.1%, to just 1,958 vehicles, sold during the first quarter of this year. The pandemic did play a factor, but the downward trend is unmistakable.

Now, Ariya will have to prove it has the stuff to keep Nissan a viable contender.