Could General Motors Change Its Name? Barra Doesn’t Say No

If a case could be made, Barra says, it could happen, but its unlikely. 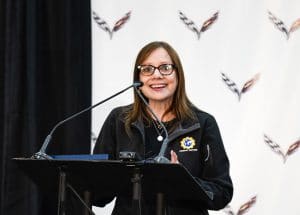 General Motors Chairman and CEO Mary Barra addressed how the company can “close the gap” with EV companies and their valuations.

What’s in a name, a fairly well-known writer once asked, adding “That which we call General Motors, by any other name – like Ultium – would sound as sweet ….”

Perhaps William Shakespeare would have waxed poetically about GM and its much-ballyhooed electric vehicle business – or maybe not – however, there does seem to be a push for the company to try to raise its battery-electric profile, and ideally its stock price with it.

During the company’s earnings call with analysts today, Adam Jonas, an analyst with Morgan Stanley, asked CEO Mary Barra about the impact, or lack thereof in terms of the stock price, of potentially changing the company’s name.

“Why not just change the name of the company?” he asked. “The General Motors brand has done its job, but I’m wondering if it might not be out of touch with some of the really interesting directions your taking the business. Why not call the company Ultium?” 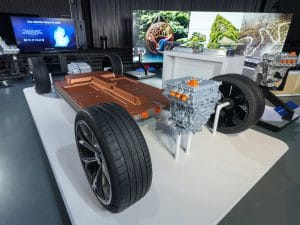 General Motors’ Ultium battery technology is generating a lot of excitement among investors.

The suggestion comes despite Fiat Chrysler and PSA, which are the process of merging, getting a less-than-positive reaction to its new corporate name, Stellantis, a couple weeks back.

Ultium is the name of the automaker’s new electric battery technology that is supposed to help propel it to the top of the EV heap. But Jonas’ contention is that despite it producing cutting edge technology is still seen by millions as a stodgy old car maker, and by extension, getting dusted on its stock price, especially by Tesla Inc., but he also mentioned EV truck and ute maker Rivian “and they haven’t even built a vehicle yet.”

Barra noted the company’s executives had put some brain power to the issue, trying to find ways to put a little shine on the GM logo due to its technical prowess. She that even a name change would be a possibility, however small, but it needs to make sense.

“When I look at a name change, and we’re going to make any changes necessary to drive the shareholder value because I still strongly believe in the technology and our future product plans as it relates to electrification, so that’s something we evaluate and look at when’s the right time and what are the proof points that everybody looks at” to take any type of massive action like a name change.

(GM beats forecast but still in the red for pandemic-hit second quarter.)

She also noted that in order to close “the gap” between GM and the highly valued electric vehicle makers and their impressive market caps, which she believes “validates” their current strategy, she said the company essentially needed to keep doing more of what it’s already doing. 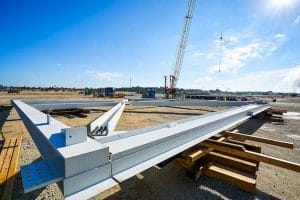 “We’ve got to keep telling our story,” she said. “We’ve got to deliver, and that’s exactly what we intend to do.” Barra quickly pointed to the Cadillac Lyriq, which will get its full debut next week and is “one of the highest clinicking vehicles I’ve seen in my 40-year career.”

She also pointed out that the company’s new battery plant in Lordstown, Ohio, began “putting up steel today.” The plant, which will produce batteries, is part of a joint venture with battery maker LG Chem, called Ultium Cells LLC.

The company is designed to get GM’s batteries to market sooner, and Barra believes that once Hummer production starts the cost of those batteries will drop below $100 per kilowatt hour, helping make EVs more affordable — or GM more profitable.

“We are excited about the progress that our team has made, and we look forward to the finished product – a nearly 3 million square-foot plant,” said Ken Morris, Vice President of Autonomous and Electric Vehicle Programs, in a statement. “Our joint venture with LG Chem will allow us to produce advanced battery cells in Lordstown, with the goal of reducing battery costs to accelerate EV adoption and ultimately benefit customers.”

Barra said until then, it’s essentially nose to the grindstone, “We’re just going to keep delivering and demonstrate that we have products that people want to buy.”