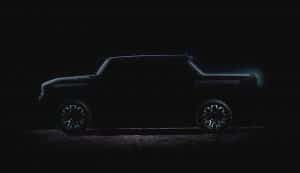 GM’s latest promo video for the GMC Hummer reveals its “coming this fall.”

Plans for the “world’s first super truck,” as CEO Mary Barra described it, were teased during a high-profile Super Bowl commercial earlier this year, with TheDetroitBureau.com among a select group of media to get a behind-the-scenes look at a Hummer prototype in March. At that time, GM officials confirmed they also will build a Hummer SUV.

The two Hummer models are part of a wave of what GM officials have said will be “more than 20” all-electric vehicles they plan to put into production by 2023. The list also includes a stretched version of the company’s first long-range model, the Chevrolet Bolt, as well as the Cadillac Lyriq battery-SUV scheduled to be unveiled in a public webinar on Aug. 6. 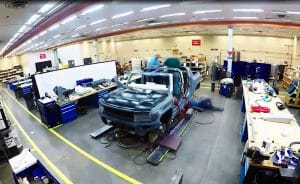 There had been concerns that GM’s aggressive battery-car program might be set back by the coronavirus pandemic that forced it to shut down North American production for two months. A sizable shore of its design and engineering employees, along with other white-collar workers, are still operating from home due to concerns about the spread of COVID-19.

Company officials have stressed that they are not backing down on EV plans, however. It’s “still full speed ahead on the EV and AV front,” Dhivya Suryadevara, GM’s chief financial officer, said Wednesday morning during a media teleconference, referring to electric and autonomous vehicles.

So far, only a handful of details have been revealed about the two Hummers. It is widely expected that the pickup will be the first of the two to reach showrooms. “Its production timing remains on track and on schedule,” a spokesman said, “for late 2021.”

What is known is that both Hummers will be marketed under the GMC brand. There will be no revival of the old Hummer marque GM abandoned after emerging from bankruptcy a decade ago.

Both models will ride on one of handful of all-new skateboard-like platforms the automaker is developing specifically for its electrification program, this one to be shared with a number of other large, truck-like models. That will include a full-size Chevy pickup, several large SUVs – which could include 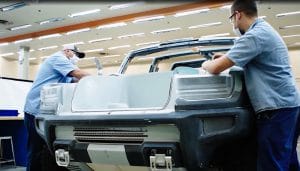 Two employees work on a prototype of the new GMC Hummer.

an all-electric alternative to the Cadillac Escalade – and possibly the battery-powered delivery vans GM is working up.

(GM’s electric Hummer breaks cover ahead of Super Bowl — and it’s a brute.)

The Hummers, like all future GM EVs, will use the automaker’s new Ultium battery technology. These pouch-like cells can be mounted in various directions in a number of different pack configurations, depending upon the vehicle. The packs also will vary in size and range. In one configuration, GM has said the Hummer pickup will yield as much as 400 miles per charge.

Separately, the new model will be offered with different motor layouts, including one with power delivered on both axles. That would yield as much as 1,000 horsepower, GM revealed during its Super Bowl ad, and as much as 11,500 pound-feet of torque.

Set to go up against the likes of the Tesla Cybertruck, the Rivian R1T and an all-electric version of the Ford F-150, the GMC Hummer pickup will be able to launch from 0 to 60, according to GM.

By using specific motors and locking down individual wheels, the company has said, the Hummer also will be able to “crab,” or all but turn in place, something that could prove useful for off-roading. 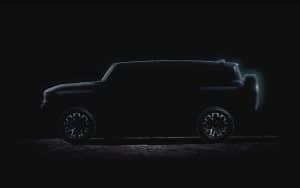 GMC’s all-electric Hummer will also be available as an SUV.

GM has hinted it will feature an array of onboard cameras providing multiple views – something already found on the newest versions of its conventionally powered pickups and SUVs.

Company president Mark Reuss also told TheDetroitBureau.com earlier this year that GM’s goal is to offer super-fast charging that will come close to the speed at which a motorist could fill the tank on a gas-powered vehicle. The automaker plans to initially take a more cautious – meaning slower – approach, collecting onboard data to determine how vehicles are charging up. It could later update the system using over-the-air updates.

(GM’s next-gen EVs will be able to charge as fast as you can fill your gas tank.)

While pricing has not yet been announced, the GMC Hummer is expected to start at around $70,000, or roughly $15,000 more than the entry-level GMC Sierra pickup.