Feature will debut on new Mustang Mach-E and follow on other “select” models. 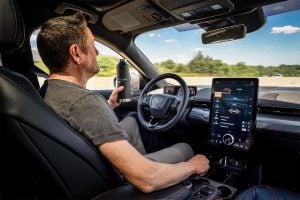 Active Drive Assist will allow a motorist to take hands off the wheel – but they will still need to keep eyes on the road.

Ford is getting ready to roll out its first long-range battery-electric vehicle later this year, and the new Mustang Mach-E also will become the automaker’s first model to get the new, hands-free Active Drive Assist technology.

Active Drive Assist will permit motorists to take their hands off the wheel for an extended period while driving on 100,000 miles of U.S. limited-access roadways that have been mapped using high-resolution technology, Ford officials explained during a media background briefing. Ford’s semi-autonomous system is similar in operation to the Super Cruise now offered on a handful of Cadillac products.

The software to use Active Drive Assist won’t quite be ready when the first version of the new Mustang Mach-E reaches showrooms later this year, but the vehicles will be equipped with the necessary hardware, including “a host of sensors,” including radar and cameras, explained Chris Billman, the engineering manager for Ford Co-Pilot 360. That’s the broad suite of advanced driver assistance systems, or ADAS, the Detroit automaker has been rolling out across its line-up.

(Mach-E buyers will get 250 kWh of free quick-charges.) 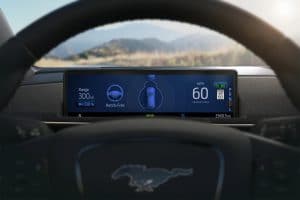 Ford worked to find the right man-machine interface so drivers understand what the semi-autonomous system is doing at all times.

The hardware will be installed on all of the new battery-electric SUVs but customers who want to activate Active Drive Assist will have to pay to download the necessary software.

The automaker isn’t ready to reveal the exact price, but Darren Palmer, Ford’s global director for battery-electric vehicles suggested it “will be highly competitive because we want as many people as possible to have this technology.”

Automakers across the industry have been working to develop ever more capable ADAS devices in a bid to ease the stress of driving while also reducing the risk of a crash. The Mach-E will have the most extensive suite of driver assistance features Ford has yet offered, including technology meant to prevent a driver from inadvertently pulling in front of oncoming traffic when turning left.

Another new system, dubbed Road Edge Detection, will help steer the vehicle back into its lane if the driver inadvertently starts drifting off the road. 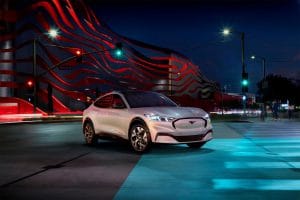 All versions of the new Mustang Mach-E will be equipped with the sensor suite for Active Drive Assist. But motorists will have to pay for the software to make it work.

But Active Drive Assist will be the most advanced feature yet added to the Co-Pilot 360 system, and it will make good use of the various screens built into the Mach-E, including a portrait-oriented touchscreen the size of one on a laptop computer anchoring the center of the instrument panel.

The hands-free system even will signal a driver when entering one of the mapped zones where it can be operated semi-autonomously. And it will make clear what mode it is in with what Palmer called “a protective bubble” displayed on the digital gauge cluster visible through the steering wheel.

While automakers like Ford eventually hope to reach the point where a driver could switch to fully autonomous mode – or even have their vehicles operate entirely without a driver – such technology is still years away. For now, Active Drive Assist and similar systems still require the motorist to be attentive and ready to take control quickly in the event of trouble – or when the vehicle approaches the end of a specially mapped road.

That can be a challenge, Palmer, acknowledged, noting that “our research has shown after seven minutes of the car driving itself, humans will begin trusting the vehicle and begin doing other tasks, maybe texting or looking around.”

To retain the driver’s attention, the Active Drive hardware will include two cameras constantly watching where the motorist is looking. The infrared system, Palmer noted, even can see through sun glasses and around the masks many people are wearing during the coronavirus pandemic. If a driver remains distracted, it will display and sound an alert. 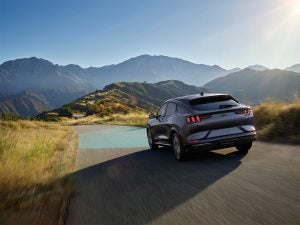 The Mach-E will feature a range of other advanced driver assistance systems, part of the Ford Co-Pilot package.

During a question-and-answer session, Ford officials noted their plan to add more roads on which Active Drive Assist can operate, while also expanding the system for sale on other products – though they would not lay out a timetable.

General Motors is taking a similar approach with Super Cruise which has roughly doubled its operating range to around 200,000 miles of roadway. During the 2021 model-year it will become available on a number of different Cadillac models, with plans to integrate it into the products from other brands by mid-decade.

It is expected that Ford will follow up with Active Drive Assist by offering it on its own highline brand, Lincoln.

Initially, the Mustang Mach-E will have the rest of the Co-Pilot 360 system activated. Once the software for Active Drive Assist is completed – with a target date of the third quarter of 2021 – customers either will be able to get it installed by a dealer or simply use the EV’s built-in WiFi system.

As with rival Tesla, that technology will have broader application, Palmer noting that, “We designed that car have every module over-the-air updatable.” Over time, he added, that will allow the automaker “to make every part of the car better and better.”