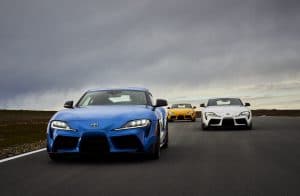 For 2021, Toyota is offering a more powerful 6 cylinder model as well as a first-ever 4 cylinder.

Let’s be honest: one of the perks of this job is having someone pull into your driveway with a brand new car, hand you the key and walk away. So, imagine what it was like when two new cars showed up simultaneously. In this case, both 2021 Toyota Supras, one with the upgraded version of the original turbo-six engine, the second powered by the new inline-four alternative.

In the days that followed, my biggest challenge was finding ways to get out of deadlines and take one or the other of the new sports cars out for a long ride to experience and compare them. But it was more than worth playing hooky. The reborn Supra was one of my favorite new entries last year – and I wasn’t alone, the two-seater named one of the three finalists for North American Car of the Year. Now, with the added power and some handling upgrades, as well, the Supra becomes just that more appealing.

Better yet, there’s the new I-4 drivetrain. True, there are a few sacrifices but, for those on a budget, it’s not just a viable but appealing option.

Overview: It only took Toyota 21 years to figure out the right formula for bringing the Supra back into production last year. The production model was heavily influenced by the design of the striking FT-1 concept introduced at the North American International Auto Show in Detroit five years earlier. 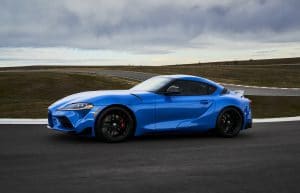 The new Supra not only offers two new powerplants, but a slew of ride and handling improvements.

In an SUV-crazed market where sports cars barely show up as an asterisk on the sales charts, coming up with a business equation was challenging but Toyota pulled it off by partnering with BMW, the Supra sharing the underlying platform, as well as the turbocharged engine, found in the latest-generation Z4 M40i roadster. The one downside: in its first year of production, the Japanese model was offered with a detuned version of the BMW inline-six.

No longer. The 2021 Supra 3.0 not only delivers 47 more horsepower than its predecessor, but it also has had some tweaks made to sharpen handling.

Supra fans can also opt for the new Supra 2.0, which delivers a still spritely 255 hp, enough to get you from 0 to 60 mph in an estimated 5 seconds.

Exterior: Long known for its bland, plain vanilla styling, Toyota was determined to push the extremes with the reborn Supra, leaning heavily on the FT-1 concept for inspiration. The production version is controversial, what with all its creases and curves – as well as the fake intakes on the hood. But it is clearly an attention grabber. 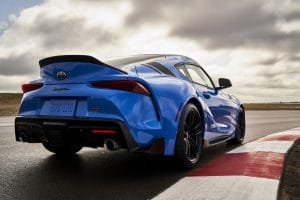 The new design is sharp break from Toyota’s bland, uninspired efforts from the past.

… virtually every detail of the exterior design has a functional purpose, whether to enhance engine breathing and cooling, or to maximize downforce while minimizing drag …

For those who want something even a little more edgy, the 2021 Supra 3.0 can be ordered in the form of the limited run A91 Edition. It adds a variety of exterior carbon fiber details, including mirror caps and rear lip spoiler, as well as matte black wheels and two unique paint choices: Nocturne black or Refraction blue.

Interior: As we noted in our original 2020 Supra review, the interior triggers a more heated discussion. Supra’s navigation screen and infotainment system, along with the iDrive controller, are lifted straight out of the BMW parts bin. 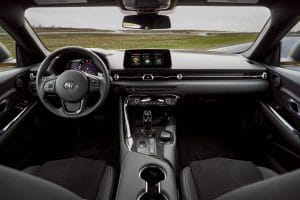 The cockpit of the new Supra is driver focused while offering plenty of the latest infotainment tech.

The instrument cluster is unique to Toyota, however, and features a more classic design, centering around the tachometer. That might seem questionable considering there is – to the horror of some fans – no manual gearbox available. But the eight-speed automatic is so quick and intuitive you might overlook that lapse, especially when you get comfortable with the steering wheel-mounted paddle shifters.

In terms of creature comfort, the seats are attractive and grippy, something you’ll appreciate even more with the improved handling of the 2020 sportscar.

While the cabin design is carryover for the Supra 3.0, that A91 edition does add some contrasting blue touches, and a special trunk mat.

Powertrain: Here’s the good part. As earlier noted, the original 3.0-liter twin turbo I-6 has had a major upgrade, jumping to 382 hp and 368 pound-feet of torque, the latter up three from the 2020 Supra. It now can hit 60 in a mere 3.9 seconds, two-tenths faster than the 2020 model. Credit new pistons and a new, dual-branch exhaust manifold. One downside: fuel economy drops 2 mpg in the city, 1 on the highway compared to the 2020 model. 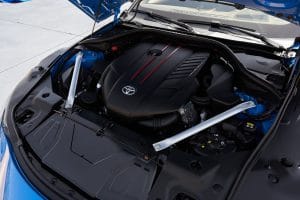 For those who opt for the 2021 Toyota Supra 2.0, the single-turbo I-4 still delivers 255 hp and 295 lb-ft and it will take you to 60 in a flat 5.0 seconds – which is just 0.9 seconds slower than the original Supra 3.0. In highway situations, we found little apparent difference between the two 2021 engine options but for the more pleasing exhaust note of the I-6.

With both the Supra 2.0 and 3.0, power is pushed to the rear wheels through an eight-speed automatic. Sadly, no manual is available and that’s something we think is unlikely to be added during the lifecycle of this Supra line.

Technology and Safety: If you like BMW’s infotainment system, you’ll like what you find in the Supra, down to the Bavarian marque’s ubiquitous iDrive controller. The one significant improvement this year is the replacement of the original 6.5-inch touch display with a new, 8.8-inch screen. Surprisingly, while the BMW Z4 has both, Toyota’s sports car makes Apple CarPlay available, but not Android Auto. Wireless charging is also available.

Toyota has made its Safety Sense suite of advanced driver assistance technologies available across the brand, and the basic package can be upgraded with features including Active Cruise Control and Blind-Spot Monitoring. 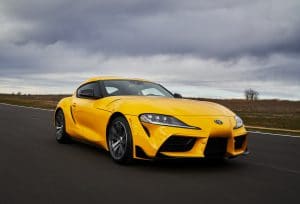 The GR Supra 2.0 with the inline provides ample performance and handling.

Drive Impressions: We were lucky enough to clock a day’s driving at Summit Point Motorsports Park in West Virginia. That narrow track, with its tight corners and extreme elevation changes, clearly showed off the cat’s claw grip of the first-year Supra.

While the pandemic limits our access to track time, we did get to take both models out to our favorite public roads in the appropriately named Hell, Michigan. The improvements to steering and handling were immediately apparent with the Supra 3.0.

… the sports car maintained composure no matter what we threw at it under aggressive driving. Credit revisions to chassis tuning, as well as increased engine mount bracing …

What was equally impressive was how the car’s adaptive dampers smoothed everything out when set to Comfort Mode on Michigan’s potholed roadways.

We did find the Supra 2.0, sans those adaptive dampers, to be a lot more bouncy while cruising, perhaps our biggest complaint. But it was nearly as impressive under more aggressive conditions.

Wrap Up: The 2021 Toyota Supra isn’t for everyone – though sports cars, by nature, never are. Normally cautious Toyota went the other extreme with the car’s styling, and there are clear sacrifices in terms of headroom, trunk space and ingress/egress.

(Behind the Scenes: How Toyota and BMW teamed up to develop new Z4, Supra.)

That said, if the 2020 Supra caught your fancy, the 2021 model will deliver just the right sort of upgrades to make it even more appealing. And, with the addition of the 2.0 model, Toyota has offered a helping hand to those for whom the original, $49,900 base price was just out of reach. 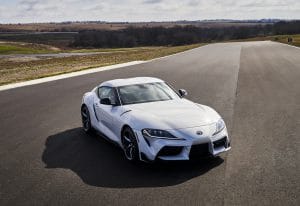