Are sports car fines likely to debate its merits? Probably, but the new Supra was well worth the wait. 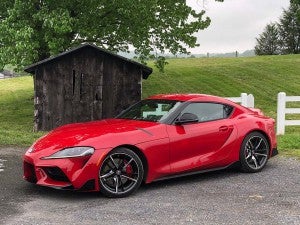 The 2020 Supra was born of an unusual collaboration between Toyota and BMW.

It’s easy to feel intimidated at Summit Point Motorsports Park. The Shenandoah Circuit is an undulating, 2-mile course that sends you ping-ponging from one blind corner to another, rising and falling over the rocky West Virginia landscape. But it was as close to perfect a place to get my first ride in the all-new 2020 Toyota Supra as I could imagine.

It’s been 21-years since the last Toyota to wear that badge appeared in U.S. showrooms. Rumors of Supra’s revival have been circulating ever since. We got a hint that something really might be in the works five years ago when the Japanese automaker revealed the striking FT-1 concept at the North American International Auto Show in Detroit.

The show car was anything but the sort of plain vanilla product Toyota has become known for, it’s long nose and sweeping roofline embodying the “passion” that Akio Toyoda has been crying out for since being named Toyota president and CEO in 2009. But the question was whether the Japanese automaker would actually ever put the FT-1 into production. Coming up with an answer became even more iffy in the years that followed, as new car buyers around the world began to migrate from sedans, coupes and sports car to SUVs, CUVs and pickups. 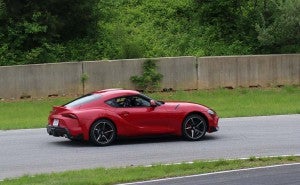 The new Supra's wheelbase is actually shorter than that of the Toyota 86, though its track is wider.

Inside Toyota, it became increasingly apparent that a non-traditional business model would be needed to justify a new Supra, despite the strong response to the FT-1. But, even before the show car was unveiled, Tetsuya Toda had been sent on a secret assignment. Arriving in Munich and shuttled over to BMW headquarters, he had one basic question to answer: would it be possible for the two car companies to work together to come up with a new sports car platform that could reduce development and production costs enough to justify not only reviving the Supra nameplate but to build an all-new version of BMW’s Z4?

It took more than a year for the companies to agree on a common goal – and to begin work on an all-new platform that was not just economically viable but that could meet the potentially conflicting challenges of serving as the foundation for both a coupe and a roadster. As we now see, the two automakers pulled it off. BMW launched the Z4 last year and Toyota’s entry making its debut at this year’s Detroit Auto Show.

Now, after flying down from Detroit, I was ready to see whether the Supra would live up to expectations – and if it would be more than just a Z4 clone. There were obvious reasons for the latter concern considering the way Toyota handled an earlier collaboration with Subaru that resulted in essentially identical sports cars dubbed the Subaru BRZ and Toyota 86. As it turns out, there was no need to worry. 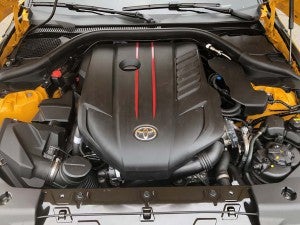 The new Supra relies on a torquey, BMW-derived inline-six that lets it hit 60 in 4.1 seconds.

As it turns out, the two teams spent relatively little time actually working together. The biggest challenge was agreeing that an all-new platform was needed and that it would adopt classic sports car proportions, as the short wheelbase and wide track of both Z4 and Supra reveal. Much earlier on than has been previously reported, Toda told TheDetroitBureau.com, the two development teams parted ways, with virtually no subsequent contact. The chief engineer noted that he has himself spent less than an hour inside the Z4 and his counterpart has had no more experience with the Supra.

A quick glimpse reveals that the two cars have little in common visually. The new Z4 is classic BMW in design, albeit with one of the lowest and broadest versions of the automaker’s familiar double-kidney grille we’ve yet seen.

The Supra meanwhile, picks up on the aggressive new design language we’ve been seeing on recent entries as diverse as the new Camry and RAV-4, with an array of curves and angles. That said, it actually comes together more effectively on the new sports car, perhaps reflecting the need for Supra’s stylists to make every little detail functional, whether to enhance engine breathing and cooling, or to maximize downforce while minimizing drag.

The overall look is a bit controversial, but my personal read is that it is striking and distinctive and should strongly connect with traditional Supra fans as well as other sports car aficionados. 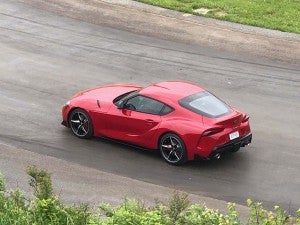 The development of the 2020 Toyota Supra took an unusually long seven years.

The interior is likely to touch off a bit more of a heated discussion. The new Supra’s navigation screen and infotainment system, along with the iDrive controller, are lifted straight out of the BMW parts bin. The good news is that this is the latest version of the Bavarian system and far easier to use than earlier iterations.

The instrument cluster is unique to Toyota, however, and features a more classic design, centering around the tachometer. That might seem questionable considering there is — to the horror of some fans – no manual gearbox available. But the eight-speed automatic is so quick and intuitive you might overlook that lapse, especially when you get comfortable with the steering wheel-mounted paddle shifters.

Supra’ design isn’t the only thing to engender some debate, however. Perhaps the biggest controversy surrounds Toyota’s decision to go with a modified version of BMW’s 3.0-liter inline-six, rather than using an engine pulled of Toyota shelf. To Chief Engineer Tada, however, it was the only viable solution, the soon-to-retire veteran insisting that no engine offers a more perfect balance suitable for a sports car like Supra. One other surprise, however, was the fact that the Toyota package produces just 335 horsepower and 365 pound-feet of torque in Supra, compared to Z4’s 382 hp and 369 lb-ft.

(Toyota earnings slip as US market softens. Click Here for the full story.) 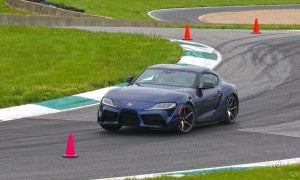 Arguably, you could punch out more. Supra takes 4.1 seconds to hit 60. That’s nowhere near benchmark today. But for a true sport car, straight line acceleration shouldn’t be the defining factor. It doesn’t take much time on public roads or the Summit track to understand that Toyota’s powertrain package is perfectly suited to the car. Could you add more power? Of course. Does the sports car need it? No, not with maximum torque coming on by 1,600 RPMs and holding almost until red line.

It helps that the new Supra boasts an essentially perfect 50:50 weight balance and, with its wide track and relatively short wheelbase – about four inches shorter than the much lower-powered Toyota 86, in fact – there is a delightful sense of balance. The throttle response is intuitive, further enhanced by Supra’s taut steering and low center of gravity.

On the Shenandoah Circuit, I was able to flog it around corners with aplomb, cutting full seconds off my times with each lap as my confidence grew. I’d be surprised if we don’t see some serious motorsports applications develop over the next several years. But even for amateurs Supra will be plenty appealing due to its forgiving nature. 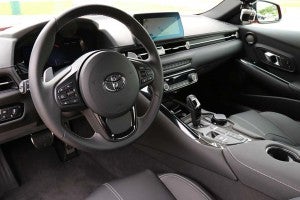 The most visible sign of the BMW collaboration comes in the interior, with Supra's iDrive system.

With no real straights, the track is difficult to fully lock into memory, meaning you’re likely to overcook a corner, hammer the brakes hard and miss your line. Even when the rear starts to drift out, however, you’d have to really work to get it to break its grip. Drive well and Supra precise steering and adaptive suspension helped you emerge from turning laps feeling like a hero.

One other big surprise was how comfortable Supra proved while driving out on the highway. Heading back towards our hotel in suburban Washington, D.C. we flipped on cruise control and stuck close to the speed limit, knowing how tightly enforced the roads are in Virginia. In a more relaxed environment, the two-seater reveals more GT-like manners, especially when you relax the bolsters on the 14-way power seats, and use the selectable driver’s mode control to soften the suspension and increase steering boost.

Despite its dual personality, I expect to continue hearing folks debate the merits of the Supra. No surprise. There are those who still chew over Porsche’s decision to switch from an air to water-cooled engine on the 911.

The other commonly heard gripe is the lack of a manual gearbox for Supra. (And for a number of exotic marques as well, one might add.) The reality is that are fewer and fewer takers and the added complexity – and cost would have made it even more difficult to come up with a valid business case. 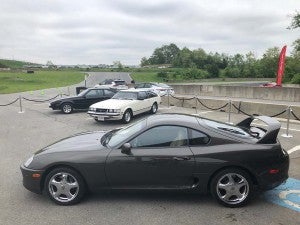 The first three generations of Supra. It's been 21 years since the model up front was pulled from production.

As to the decision to go with an eight-speed automatic, rather than, say, a twin-clutch, Tada answers with one word, “weight.” Along with wheelbase length, track width and center of gravity, that’s an essential part of a sports car’s proportions. A DCT would’ve added substantial mass over the eight-speed, explained Tada, the automatic allowing the development team to keep Supra’s weight down to a modest 3,397 pounds.

One things few folks will likely gripe about is price. Somehow, Toyota has managed to bring the base 2020 Supra 3.0 in at just $49,990– before the $930 delivery fee. To put that into broader perspective, that’s actually less than what you’d have paid for the previous-generation Supra more than two decades ago.

There will be three versions available, including the 3.0 Premium, at $54,920, as well as a Launch Edition, at $56,180. All three share the same powertrain and adaptive suspension system. The Premium adds niceties like an 8.8-inch touchscreen, a head-up display and 12-speaker JBL sound system. And the Launch Edition, limited to 1,500 cars, adds red mirror caps, black wheels, a red leather interior and a special, commemorative plaque.

Let’s be honest: sports car buyers are a picky and opinionated lot. And that’s part of the fun. You’re never going to get everyone to agree on the merits of any single model. But for those who might question the merits of the 2020 Toyota Supra, simply slipping behind the wheel and taking it for a drive should quiet most doubts – especially for those who might have access to a track or, at the least, some seriously challenging public roads. It’s been a long wait for the new model, but one that I found well worth it. If this is what CEO Toyoda means by “passion,” he’s defined it well.

(Mazda might be ready to bring its Vision Coupe Concept — and an all-new 6-cylinder engine — to life. Click Here for the story.)