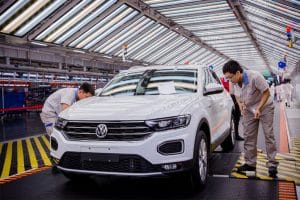 VW is looking to increase its sales of EVs in China by investing more than $2B in EV maker and a battery company.

Volkswagen AG is betting big – more than $2 billion – that the Chinese electric vehicle market – the largest in the world – will rebound, leading to growth for its burgeoning line-up of electric vehicles and ultimately to more profits.

The German automaker announced it plans to invest $1.11 billion JAC Motors, a joint venture it holds with state-owned Anhui Jianghuai Automobile Group. The move increases its ownership stake from 50% to 75% in the EV maker.

Additionally, the company is putting $1.1 billion into battery maker, Guoxuan High-Tech Co. This gives VW a 26% share in the company, making it the Shenzhen-listed company’s largest shareholder. Both companies are in Hefei, a city 300 miles west of Shanghai. The investments also reveal how important they believe the market is.

“This shows once again that Volkswagen is confident in the development of the China market,” said Stephan Wöllenstein, Volkswagen’s China chief executive, at a news conference Friday. 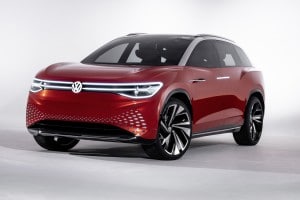 VW’s latest concept, the I.D. Roomzz, will ultimately become a China-only product to start in 2021.

China’s been looking to boost auto sales in the wake of the coronavirus pandemic, reinstituting many of the incentives it previously offered to people wanting to buy electric vehicles. VW isn’t alone in looking to take advantage to boost sales as Tesla reduced the price of its quick-selling Model 3 in the country to help buyers meet the requirements for one of the incentives.

Automakers have been making a lot of noise about increasing sales in China, which isn’t just the largest market in the world for EVs, but for auto sales overall. Last year, Ford unveiled its China 2.0 plan, designed to refocus its efforts in the country after a late start, including selling 15 EVs by 2025. General Motors officials recently unveiled its new battery technology, mentioning it would help make further inroads into the segment in China, boasting it would offer 20 EVs in the country within three years.

Volvo, Mercedes-Benz, BMW and other automakers have all been strengthening ties to their Chinese partners with an eye toward growing their battery-electric sales in the months and years ahead.

The timing is interesting as sales of EVs in China have been down for the past 18 months after years of growth — just like its overall market. Sales fell 4% last year to 1.2 million vehicles and are down 43% through April. The initial decline was largely tied to China revoking the incentives it used to entice buyers to gobble up EVs. However, not wanting to artificially inflate the market, it pulled them back in late 2018. 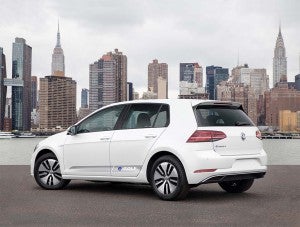 Volkswagen’s e-Golf will be one of the first electric VWs available in China.

However, automakers like VW are hoping to get in while the market is down with the idea that it will grow again as EVs gain favor with buyers there and around the world. Volkswagen’s ambitious plans call for it to roll out 80 battery electrics by 2025. Further it plans to offer electric version of all of its vehicles – a total of 300 – by 2030.

VW and the others aren’t just blindly rolling the dice on this bet. The Chinese government is still pushing for more new energy vehicles, or NEVs. They want electric vehicles to account for one in every five new vehicles sold by 2025, or as many as 7 million vehicles, according to the Wall Street Journal. VW plans to have a significant share of that total: 1.5 million, VW executives said Friday.

In addition to its partnership in JAC Motors, Volkswagen just built with two other partners, FAW Group Corp. and SAIC Motor Corp., the Journal reported. The two plants will be capable of putting out 600,000 EVs annually.

(China set to raise EV target to 25% of new car sales — but can foreign makers benefit?)

China’s made it easier on the foreign automakers as well, allowing them to own more than half of JVs producing EVs. In fact, Tesla is completely independent in China — the only automaker to accomplish the feat. Others, like BMW and Mercedes have increased ownership stakes in joint holdings since the rule was change.