Result is the first full-year loss in 11 years. 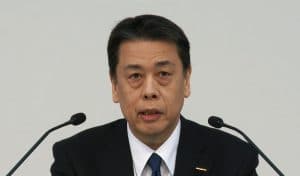 Nissan reported a $6.2 billion loss for the fiscal year that ended on March 31, its first full-year deficit in 11 years and a signal to analysts that the automaker will face substantial headwinds as it launches its second turnaround plan since it was embroiled in scandal with the arrest of former CEO and Chairman Carlos Ghosn in November 2018.

The coronavirus pandemic accelerated the problems facing Japan’s second-largest automaker, but it was also hammered by product problems and other issues that included internal strife triggered by Ghosn’s arrest.

Under Ghosn, Nissan, along with alliance partners Renault and Mitsubishi, grew to become one of the world’s best-selling automotive groups. But that focus on what Nissan CEO Makoto Uchida Thursday called “excessive sales expansion” backfired, hurting its bottom line.

(Stocks surge as Renault-Nissan move to save alliance.)

Going forward, Uchida said while announcing the full-year numbers, Nissan will shift its strategy to “maintaining financial discipline and focusing on net revenue per unit to achieve profitability.” 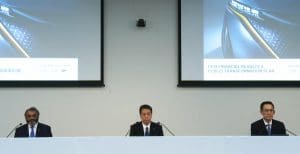 Nissan posted its first full-year loss in 11 years and is implementing a restructuring program to return to profitability.

There were no doubts the results for the year would be bad, Nissan previously signaling it would go into the red. But the automaker added to the deficit by booking $5.6 billion in restructuring costs and other charges.

Since Ghosn was arrested shortly after arriving in Tokyo on his corporate jet – subsequently being accused of a variety of financial crimes before fleeing to his family’s native Lebanon last December – Nissan has been in turmoil. Scores of senior executives, many of them non-Japanese, have left the company and there have been several shake-ups in the company’s C-suite. Uchida, the third chief executive since the end of 2018, has called for an aggressive restructuring that includes fewer product lines, lower sales and fewer workers.

It announced a plan last spring to eliminate 12,500 jobs worldwide but has already expanded that figure, with an additional 3,000 workers to be let go when a factory in Barcelona, Spain is closed. It now is targeting production capacity of around 5.4 million vehicles annually, a 20% reduction.

That would still give room for a rebound, Nissan sales for the fiscal year falling 11%, to 4.9 million worldwide. 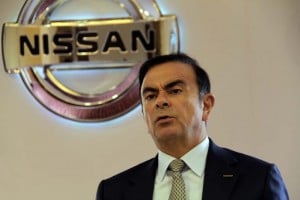 Nissan’s been in turmoil since former CEO Carlos Ghosn was arrested in Tokyo and drummed out of the company.

Under Ghosn, who served not only as Nissan chairman but as head of the Renault-Nissan-Mitsubishi Alliance, the group’s global sales peaked at 10.76 million in 2018, making it one of the world’s three best-selling automotive groups, along with Toyota Motor Corp. and Volkswagen AG.

But demand fell 5.6%, to 10.16 million, in 2019, and like much of the industry, the Alliance numbers are expected to fall even more sharply in 2020. While the pandemic has played a part – Nissan, in particular, suffering a global 42% dip in April of this year – all three partners were struggling in the marketplace even before the disease began to spread beyond Wuhan, China.

“I will make every effort to return Nissan to a growth path,” CEO Uchida said Thursday, adding, “We must admit failures and take corrective actions.”

He stressed the need to reverse Nissan’s increasingly inward focus, a problem numerous sources have told TheDetroitBureau.com led to the exodus of many talented executives, especially foreigners like Jose Munoz. The Nissan Chief Performance Officer left in early 2019 and is now serving as one of the top executives at Hyundai Motor Group. 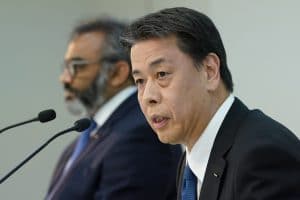 Among the other steps that Nissan now plans to take, the carmaker will close a plant in Indonesia, as well as aforementioned site in Spain, abandon the South Korean market and pull the entry-level Datsun brand from Russia.

Meanwhile, it will try to fix the problems with the Renault-Nissan-Mitsubishi Alliance that nearly collapsed after Ghosn’s arrest. Earlier this week, the three partners announced a series of steps they plan to take, including a move to “commonize” the underlying platforms and components used in their products. Currently, the three share architectures on only 39% of their vehicles. That is expected to double by 2024, according to Alliance Operating Board Chairman Jean-Dominique Senard, who also serves as Renault chairman. That alone is expected to save the three companies billions.

The new Alliance strategy will each manufacturer focus on specific areas of business. Nissan, for example, will take the lead in most areas of electrification and autonomous driving, as well as in China, North America and Japan, Mitsubishi leading on plug-in hybrids and in the Oceania region, while Renault will focus on electric microcars and Europe and Latin America.

One thing that appears to have helped resolve nagging issues within the Alliance was Renault’s announcement that it would no longer pursue a full merger with Nissan.

Despite watching its operating income tumble for the fourth consecutive year, Nissan reported it has ample cash – and $12 billion in unused credit lines — on hand to push through its current problems.