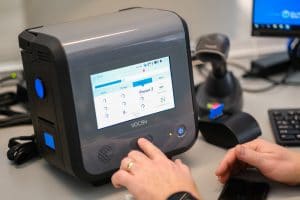 Workers prepare to build ventilators at the GM manufacturing facility in Kokomo, Indiana, in response to the COVID-19 pandemic.

As dozens of its employees train at its Kokomo, Indiana plant to build much-needed ventilators, General Motors appears to be on the right side of the Trump administration this week, securing a $489.4 million contract to supply 30,000 of the devices.

The U.S. Department of Health and Human Services offered the contract for ventilator production under the Defense Production Act, used by President Donald Trump to force GM to build the ventilators. GM will supply 30,000 ventilators for the Strategic National Stockpile by the end of August with 6,132 being delivered by June 1.

GM is building the machines in partnership with Washington-based Ventec Life Systems. The White House previously had been negotiating with Ventec while GM was a manufacturing contractor to company; however, Trump’s memorandum made GM the producer.

“Invoking the Defense Production Act to secure ventilator production from GM and other companies is a part of President Trump’s all-of-America approach to combating the coronavirus,” Alex Azar, Health and Human Services secretary, said in a statement. 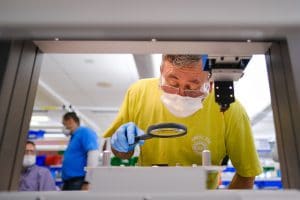 GM workers at its Kokomo plant are in the midst of training to build ventilators to assist patients with COVID-19.

“By rating contracts under the DPA, HHS is helping manufacturers like GM get the supplies they need to produce ventilators as quickly as possible, while also ensuring that these ventilators are routed through the Strategic National Stockpile to where they’re needed most.”

The automaker reached out to Ventec in mid-March to see how the two companies might work together to help address the gaping need for ventilators. As the two sides continued to work out the details, Trump got a little testy, suggesting that GM wasn’t doing enough to get the devices produced in a timely manner.

Despite the momentary bit of tension, GM continued to push forward with Ventec, announcing it would begin training UAW volunteer workers to be manufacture the ventilators.

(GM teams up with Ventech to ramp up production of ventilators for coronavirus epidemic.)

“GM and Ventec Life Systems are working with speed and urgency to arm front-line medical professionals with the critical care ventilators they need to treat seriously ill patients,” GM said in a statement. 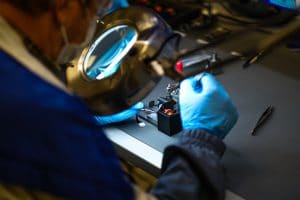 GM will build 30,000 ventilators for the federal stockpile with the first devices shipping later this month.

“GM is proud to deploy its purchasing and manufacturing capability alongside the respiratory care expertise of Ventec. We remain dedicated to working with the Administration to ensure American innovation and manufacturing meet the needs of the country during this global pandemic.”

Trump said in a briefing April 7 he expected to have 110,000 ventilators by early July to help areas with high COVID-19 cases facing shortages of the medical devices that help patients in severe cases breathe.

“We have a lot of great companies making ventilators,” he said, including GM as well as Ford and GE in the group.

Ford also is making ventilators for the federal government, partnering with GE to build simplified version of Florida-based Airon Corp.’s devices. It plans to have 50,000 of the $7,000 devices built by July 4, at its Rawsonville Components Plant in Ypsilanti.