Tesla CEO Elon Musk has the business development agencies in several states buzzing after he tweeted that he was looking to set up a factory in the central U.S. for the Cybertruck.

“Scouting locations for Cybertruck Gigafactory. Will be central USA,” Musk tweeted. He followed that up with another tweet that said, “Model Y production for east coast too.”

The uniquely styled Cybertruck was introduced late last year. Slated to go into production in late 2021, it comes with a starting price of $39,900. Musk said the company has more than 200,000 reservations for the truck.

(Tesla in talks to switch to different battery for Chinese Model 3 sedans.)

It didn’t take long for the senior leaders at some states to invite Musk to bring the new plant – and likely several thousand jobs – to their plant. Some of those tweets getting less than favorable responses to other Twitter users. 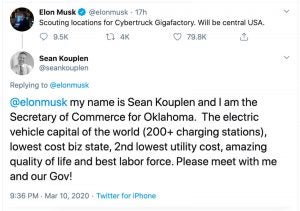 Sean Kouplen, Oklahoma’s secretary of commerce, quickly invited Musk to come to the “electric vehicle capital of the world,” citing the state’s “200-plus charging stations.” His claim was met with skepticism with one Tweeter pointing out that the claim was specious since the state doesn’t allow Tesla to sell vehicles there.

Rep. Rick Crawford (R-Arkansas) was also quick to jump on the potential opportunity, offering a personal tour of his home district, touting its proximity to a “major navigable waterway and airport (FedEx). Also largest steel producing area of the country.” He told Musk he would “be amazed!”

Colorado Jared Polis was much simpler in his Twitter pitch, “Colorado is the perfect place! Let’s talk!” Musk responded to none of the pitches publicly. 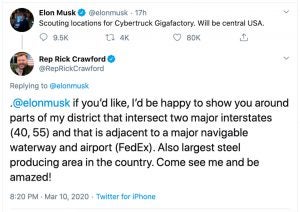 During the company’s full-year earnings call in January, Musk noted that Cybertruck production would be limited because of the number of batteries the truck needs. He also noted that increasing battery production capacity would be the EV maker’s top priority.

“The thing we’re really going to be focused on is increasing battery production capacity,” Musk said, adding later, “It’s part of the reason we haven’t accelerated production of the semi because it requires a lot of cells.”

Despite throwing a wet blanket on building the Semi in large numbers, he did allow that production on the truck is expected to start in the fourth quarter this year. 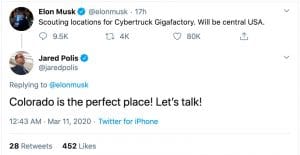 He said that until production is increased, producing the Cybertruck and the Semi truck in large numbers isn’t viable because it takes away from Model 3 and Model Y production. “We’ve got to make sure we’ve got a very steep ramp for battery production,” he said.

This push for more batteries comes as the new Model Y began rolling out early. The first production Model Y SUVs are slated to be delivered later this month, more than six months before the company’s forecast.

The Model Y is currently built at the company’s facility in Fremont, California, along with the Model 3. If the Model Y meets Musk’s sales expectations, which is to exceed the Model 3. The company already has a plant in New York, but it builds photovoltaic cells for the SolarCity subsidiary.