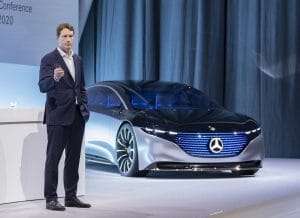 Daimler CEO Ola Kallenius said this year will be tough just as last year was despite record Mercedes-Benz sales.

Much of the nearly 5 billion-euro decline can be traced to 4.2 billion in charges the company took due to diesel-related investigations and the legal costs associated with it. Additionally, the company spent heavily on its move toward electric vehicles.

The company saw its revenues increase to 172.7 billion euros from 167.4 billion euros – a 3% jump. However, it wasn’t enough to offset the aforementioned penalties the German company was forced to absorb. 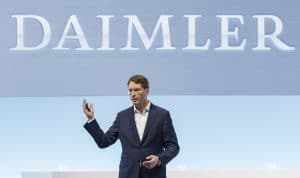 Daimler’s Kallenius said the company will continue to focus on cost cutting measures as it tries to move back to previous profit levels.

Many of Daimler’s other units enjoyed sales improvements in 2019. Mercedes-Benz Vans (4%), Daimler Buses (6%) and Daimler Mobility (3%) said sales or business increases last year; however, the Daimler Truck unit offset some of those gains with a drop of 6%, but the slide in profits was fairly small.

“While our results in 2019 reflect ongoing strong customer demand for our attractive products, we cannot be satisfied with our bottom line,” said Ola Källenius, chairman of the Board of Management of Daimler AG and Mercedes-Benz AG. “Above all, material adjustments affected our financial results last year.”

Källenius, who took over for Dieter Zetsche, his popular predecessor, midyear last year, knew the company was facing some tough sledding and immediately began efforts to save money. The company slashed its dividend by 72% to 0.90 euros per share. He also instituted a variety of cost cutting measures – including staff reductions – hoping to blunt the impact of the charges.

Shareholders were given a warning about the tough earnings results, providing a warning when preliminary earnings figures were released Jan. 22. Despite his changes, he suggested continued efforts would be necessary in 2020.

“(M)easures to cut costs and to increase cash flows are necessary,” he said. 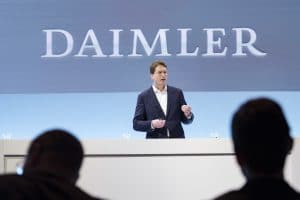 Daimler’s 2020 financial results are expected to mirror its 2019 final numbers.

“In 2019, we defined them and we have started executing. We will take the necessary actions to enhance our financial strength as the basis for our future strategy.”

(Daimler hit with new lawsuit about the cost of diesel emissions.)

That future strategy is a shift away from diesel- and, to a lesser extent, gas-powered vehicles. Daimler has been investing heavily in those programs and despite profits falling off a cliff in 2019, Källenius remains committed to moving forward with those developmental efforts — while trying to turn a bigger profit in 2020.

“The future of the Daimler Group lies in (carbon dioxide)-neutral mobility as well as in consistent digitization, leveraging its full potential in our products and our processes,” he said. “To achieve that, we have substantially ramped up our investments into new technologies. We are determined to materialize our technological leadership and at the same time to significantly improve profitability.”

Charging ahead with its zero-emissions strategy while returning Daimler to the level of profitability that shareholders and analysts are accustomed to is a tall order that some believe may not be possible for a few years.

“There is very little scope for optimism at Daimler. It will take years until margins recover to levels worthy of a premium manufacturer,” Michael Muders, fund manager at Union Investment, told Reuters.

That said, the company said this year is going to look a lot like last year. Group revenue in the fiscal year 2020 is expected to be stable at the level of 2019. At Mercedes-Benz Cars & Vans, revenue should be around the prior-year level, the company predicted. 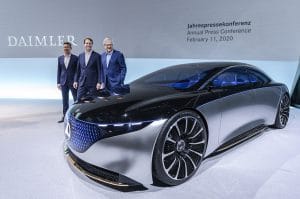 The company will continue to invest heavily into the development of its electric vehicle program.

Daimler Trucks & Buses expects a significant revenue decrease while Daimler Mobility division forecasts revenue at the prior-year level. Daimler assumes that Group EBIT in 2020 will be significantly above the level of 2019, which was negatively impacted by various material adjustments.

The company said it aims to keep property, plants and equipment and R&D spending at roughly the same level as last year. It will look for savings of more than 1.4 billion euros by the end of 2022 through cuts in administrative and personnel costs and expects a significant rise in operating profit and free cash flow this year, Reuters reported.

“The focus in the coming years will be on the significant improvement of our margins as well as the cash flow,” said Chief Financial Officer Harald Wilhelm in a statement. “Our goal is to ensure solid net liquidity to protect the necessary investments, and at the same time, to pay attractive dividends. We will ensure disciplined capital allocation in all areas.”