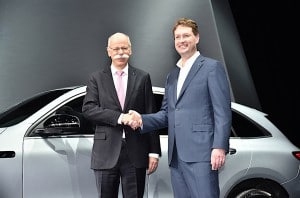 Dieter Zetsche, left, handed over the top job at Daimler AG to Ola Kallenius, who is now instituting a slew of cost cutting measures.

Daimler AG, parent company of Mercedes-Benz, plans to eliminate 10,000 jobs during the next three years as the company restructures to prepare for an electric future and a smaller earnings.

The cuts and the restructuring have taken on new urgency as Daimler has been forced to issue a series of profit warnings this year after years of lavish spending under former CEO Dieter Zetsche.

Audi, one of Daimler’s principal rivals for the luxury car sales, also announced major cuts this week of roughly 9,500 jobs and BMW also announced a series of cuts aimed at reducing personnel costs as the German industry braces for sweeping technical changes that will move the business to electric vehicles and away from internal combustion engines and the research necessary to develop autonomous vehicles. 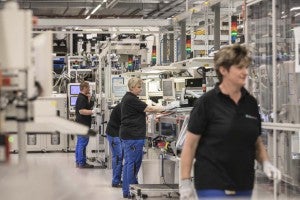 Daimler AG is partnering with BAIC to ramp up its electric vehicle production in China, which is pushing for more “new energy vehicles.”

At the same time, the merger between Fiat Chrysler Automobile N.V. and the French automaker PSA are also expected to result in consolidations and jobs cuts in Europe. Several European unions have voted to approve the merger but two of the largest unions, France’s CGT and Germany’s IG Metal, which represent workers at PSA’s Opel subsidiary, have withheld approval.

“The automotive industry is in the middle of the biggest transformation in its history,” Daimler said in a statement.

However, representatives of Daimler workers indicated they wanted more information about the planned cuts, according to Reuters.

The workforce needs a clear strategy for the future, said Michael Brecht, chairman of Daimler’s works council. “A reduction in capacity must not be carried out on the backs of the employees,” he said.

Plans laid out by Daimler in November showed the company aimed to cut staff costs by around 1.4 billion euros or $1.54 billion by the end of 2022. 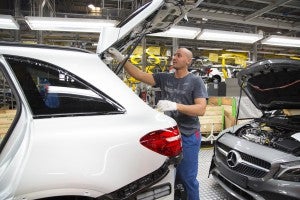 Daimler is looking to cut 1 billion euros in personnel costs by 2022.

Daimler has repeatedly cut its profit outlook over recent months, partly to cover a regulatory crackdown on diesel emissions but also because of a slowing auto market.

Group operating profit will be “significantly lower” than a year ago, the company said last month. Other measures to reduce staffing costs include offering shorter working weeks.

Agreements in place to prevent forced redundancies in Germany until 2029 will remain in place, Daimler said.