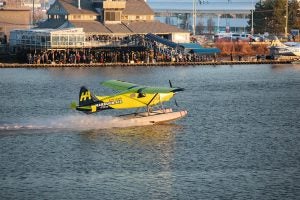 Odds are that you’ve never heard of Canada’s Harbour Air, or its CEO Greg McDougall, but both entered the aviation history books this month.

With McDougall in the pilot’s seat, the Vancouver-based airline became the first to commercially fly an electric-powered aircraft – in this case, a 63-year-old De Vavilland Beaver seaplane.

“I was an early adopter of the Tesla car and so impressed by their innovation,” McDougall said. “When I got the car five years ago, I wondered if we could transfer similar electric engine technology to our planes. Someone was going to do it someday, so it may as well be us.”

Aircraft contribute about 3% of global warming carbon dioxide emissions, but they also cause environmental issues in a number of other ways, according to research by Ulrike Burkhardt and Bernd Karcher from the Institute for Atmospheric Physics at the German Aerospace Centre, including not only additional pollutants like sulfur dioxide and oxides of nitrogen, but even the contrails they form. 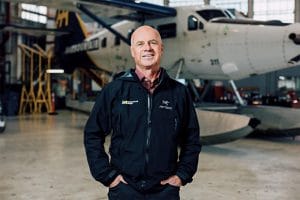 Harbour Air CEO Greg McDougall was manning the seaplane during its first flight.

That has led to growing pressure to find ways to reduce the impact of flying, including through the use of “clean” fuels like hydrogen, as well as through electrification. Research money has already been included in NASA’s budget and a recent proposal would ask for $1.2 billion from Congress during the next three years.

Private industry hasn’t been waiting, however. Rolls-Royce, one of the largest manufacturers of jet engines, soon hopes to demonstrate the potential of electric propulsion with a battery-powered plane targeting a speed record, the first demo flight scheduled for late spring next year.

In the case of Harbour Air, it turned to start-up magniX for the electric drive system retrofitted into the old de Havilland.

The combination proved particularly suitable, he and McDougall told reporters. For one thing, the seaplane is relatively modest in size, handling a maximum 19 passengers plus crew on half-hour flights from Vancouver to the various islands surrounding the city. And even if the motor drive system failed, the fact that the craft could land pretty much anywhere along the coast added an extra margin of safety. 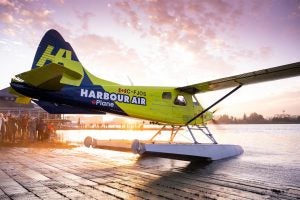 It may take 2-3 years to win approval to begin using the electric drive system in regular commercial service.

On the plus side, using electric propulsion offered a number of advantages over the conventional piston engines powering the rest of Harbour Air’s 40-plane fleet. Not only is the technology cleaner, but it much less noise, quiet enough to allow those inside the de Havilland to communicate without headsets.

And, according to McDougall, the system clearly offered better performance. Electric motors deliver tremendous amounts of torque and respond instantaneously to demands for more power, unlike a traditional gas engine.

“I’m really anxious to get back in the aircraft and do some more actual flying,” McDougall told the Washington Post. “We didn’t get a chance to put it through its paces.”

The initial flight of the Harbour Air electric plane drew crowds of onlookers lining the waterfront. For now, the aircraft is in certification stage, a process that will take between two to three years, according to the New York Times.

If and when regulators give it a go, the aircraft will be able to handle a 30-minute flight – with a requisite 30-minute reserve – while being able to recharge in about an hour. 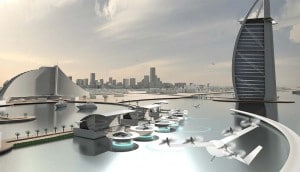 Adding to the green bona fides, BC Hydro, which set up the charging station at the Vancouver Centre Flight Dock, generates its power using renewable sources.

Where battery-powered flight goes next is uncertain. There are a number of companies working on private and commercial passenger drones, including Uber, which hopes to have a service using electric craft in the air before mid-decade.

The proposal before Congress, meanwhile, envisions even more dramatic applications. Its sponsor, Maryland Democratic Sen. Ben Cardin, envisions electric aircraft as large as a 737 could be in commercial operation by 2040.