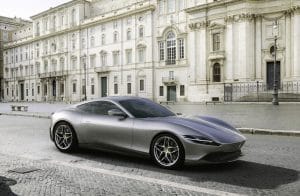 Ferrari took the covers off the new Roma. The fifth debut from the Italian carmaker this year.

Ferrari’s long history of stunning automotive design gave today’s designers plenty of inspiration for the newest model from the company, the Roma.

“Its signature Italian styling is a contemporary reinterpretation of the carefree lifestyle of 1950s and ‘60s Rome, from which it takes its evocative name, Roma,” the company notes. “Stylistically, the Ferrari Roma is characterized by clean and symbiotic forms.”

(Ferrari plugs in, charges out with its first-ever plug-in, the SF90 Stradale)

The new model is powered by a 3.9-liter turbocharged V8. The dual-clutch eight-speed transmission puts out 612 horsepower and travels in excess of 200 mph, the Italian automaker boasts. It will reportedly travel from 0 to 62 mph in 3.4 seconds. The front-engined Roma sits between the mid-engined F8 Tributo and convertible Portofino in the Prancing Horse line-up. 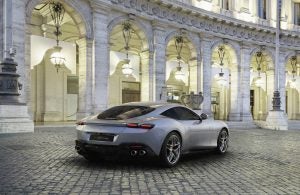 The newest Ferrari is described by officials as a grand tourer. It can be had with an optional 2+2 seating configuration, or a shelf for luggage behind driver and passenger. While the inspiration for its shape is drawn from past models, it’s original enough to differentiate itself from those historic cars.

Overall the exterior features a long hood that raises up a bit at the headlights and then swoops back down for a low nose. That front end gets a new grille as well as new LED matrix headlights with ultra-thin daytime running LEDs.

The occupants are nestled into cozy, but not claustrophic cabin that, as mentioned earlier, is big enough for four – if two are small – or some luggage. The rear of the car is highlighted with big rear haunches right over the axle and a hidden rear wing is integrated into the bottom lip of the windscreen.

(Ferrari offers a V-8 Tribute with its F8 Tributo)

The wing will adjust to one of three positions depending upon the speed of the vehicle. The computer will determine that position, based on the downforce needs of the driver. 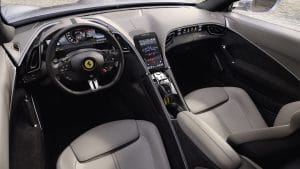 The interior offers room for each occupant and digital displays for the driver and on the center console.

“We wanted to create a car that was quintessentially GT, but we don’t like the overly nostalgic approach,” Ferrari Chief Designer Flavio Manzoni told Britain’s AutoExpress. “We had to create something pure and sophisticated. Something that can be drawn with a simple line from a pencil.”

Although the exterior design may be classically inspired, the car’s underpinnings are current technology including a new modular chassis and platform technology developed by Ferrari, set to underpin all of the marque’s next-generation models. Seventy percent of the Roma’s components are totally new, while with fluids on board it tips the scales at 1,570kg.

Ferrari ensures all that power comes with plenty of control, including a full five-position Manettino switch on the steering wheel, enabling wet, comfort, sport, race and ESC off driving modes. The Roma is the first Ferrari gran tourer to feature Slip Slide Control 6.0 – a traction and control system usually reserved for the firm’s supercars, while Ferrari Dynamic Enhancer brake-controlled torque vectoring is also fitted.

On the inside each front-seat passenger is enveloped in two separate areas. The car’s dashboard uses a centrally located 8.4-inch infotainment touch screen rolls right into the gear selector panel and features a digital display for the driver.