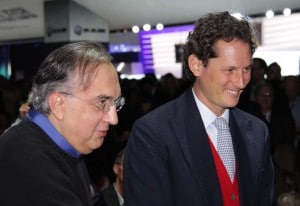 John Elkann, FCA chairman, pictured with late CEO Sergio Marchionne, said that Fiat Chrysler and PSA are pushing toward the completion of their proposed merger.

Fiat Chrysler and PSA Peugeot Citroen plan to sign a binding merger agreement in the coming weeks, according to communications each company sent to its employees.

The move would lock down the deal the two carmakers reached last month and further downplays concerns that the proposed merger might be impacted – even scrubbed – in the wake of a serious legal challenge recently lodged against FCA. Last week, General Motors announced that it was filing a RICO lawsuit against its Detroit competitor, alleging it conspired with the United Auto Workers union to competitively weaken GM.

FCA Chairman John Elkann last week said he wasn’t worried about what the lawsuit – which potentially could lead to a multi-billion-dollar verdict – would mean to the proposed merger.

Plans for a Fiat Chrysler-PSA merger were announced Oct. 30, just months after a similar deal that would have paired FCA and Peugeot’s French archrival Renault fell apart. Should the proposed merger-of-equals be finalized, it will create what would become the world’s fourth-largest automaker, with a combined value of around $50 billon. 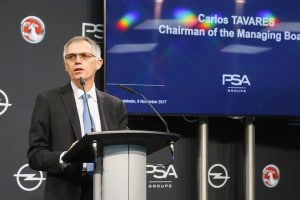 PSA CEO Carlos Tavares said that once the merger is complete, all of the brands of both companies will remain intact.

The deal would also bring to fruition the long-standing goal of the late Sergio Marchionne. Almost from the moment he helped bring Fiat and Chrysler together at the beginning of the decade, the founding FCA CEO was looking for an additional partner, though he would fail to win over targets that included both General Motors and Volkswagen AG.

It took Marchionne’s successor, Michael Manley, to finally put a merger within reach.

According to two documents obtained by the Reuters news service, employees at both Fiat Chrysler and PSA have been advised that the next, critical step in the process, the signing of a binding merger agreement would occur within the coming weeks. That is in line with comments made by FCA Chairman Elkann who last week said he expected the signing to take place before the end of 2019.

The e-mails sent to employees through internal channels also indicated that there are 50 people nvolved in merger preparations, organized into nine separate working groups. They are led, on the FCA side, by the Italian-American automaker’s Group Treasurer and Global Head of Business Development David Ostermann, with PSA Executive Vice President Program and Strategy Olivier Bourges handling things for the French.

The imminent signing suggests that the two automakers are hammering through a number of potential obstacles. Among other things, observers had been concerned about the role the French government might play, as it is one of the largest PSA shareholders, with a 12.23% stake. The government wound up being a major factor behind the collapse of the FCA-Renault negotiations last spring. But it has not been as active a participant in PSA’s management decisions as it has been with Renault.

That reflects the muscle CEO Carlos Tavares has developed since taking over what was a company close to bankruptcy in 2013. The PSA Group, which includes brands such as Peugeot and Citroen, generated a record operating profit of 8.7% for the first half of this year, rivaling the numbers of many luxury automakers.

During the past week, new concerns about the proposed FCA-PSA merger have arisen in the wake of GM’s decision to file its lawsuit. In it, the bigger of the Detroit automakers claims Fiat Chrysler used bribes and other illegal acts to win unfair concessions from the UAW. That, in turn, made General Motors less cost competitive. The suit also claims one goal was to force GM to merger with Fiat Chrysler. While former CEO Marchionne was identified as the man at the center of the conspiracy, though he was not a named target of the lawsuit.