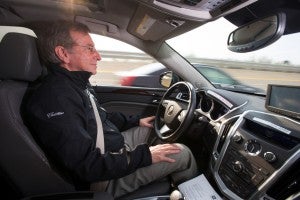 As vehicles become more and more technologically advanced, drivers are becoming more and more comfortable with a future that involves self-driving cars, according to a new study.

About 40% of drivers are in favor of self-driving vehicles being available for purchase right now, according to Adobe Analytics’ newly released Future of Driving Report. The report doesn’t clarify what level of autonomy they are comfortable with.

The report chronicles the responses of more than 1,000 people across the U.S. and finds somewhat unsurprisingly that millennials are much more comfortable with autonomous vehicles and other forms of technology in vehicles. However, it also finds there are very disparate opinions about vehicles between electric vehicle owners and gas-powered vehicle owners.

People who are ready for the self-driving future now have big plans for the time they used to spend driving. Once they’re in the car, research shows nearly half of drivers (49%) intend to eat and drink while being driven, followed by talking on the phone (47%), holding face-to-face conversations (31%), writing emails (42%) or even working (36%). Thirty percent plan to nap. 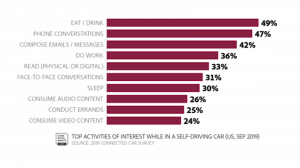 Many drivers are looking for what the study describes as “self-driving” features, but typically fall under the category of advance driving assist systems, or ADAS. Language aside, demand for these safety and convenience technologies is growing as 44% of drivers say having a car with self-driving features such as lane-keeper assist and parking assist is currently a factor in their car buying decision.

Not surprisingly, millennials are much more comfortable with advanced technology in vehicles and are more willing to buy electric vehicles or those with connectivity features. Nearly half of EV owners are millennials whereas gas-powered vehicle owners are more evenly dispersed across all age groups.

The study revealed that EV owners hold very different opinions than their gas-powered counterparts. Electric/hybrid car drivers are also twice as likely to feel comfortable getting into a self-driving car vs. gas-powered car drivers.

Gas car drivers more willing to share their car data in exchange for rebates and promotional offers whereas 60% of EV owners said they would do so if rewarded with personalized experiences. However, owners of gas-powered vehicles aren’t entirely inflexible about what powers their vehicles. 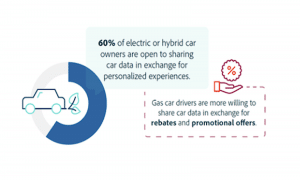 According to the study, 60% of gas car drivers say they’d be more willing to purchase an electric car if charging stations were more readily available, batteries had a longer range and the cars were more affordable. Further about one in three are mulling the possibility of switching sides and buying an EV or hybrid next.

Overall, the advent of interactive vehicles has increased everyone’s comfort level. The desire to have that technology in a vehicle is on the rise. In fact, a third say a built-in voice assistant is a factor in what vehicle they will buy next.

Familiarity helps with this as 25% reveal they’re driving a vehicle with some type of built-in voice control functionality, and 39% of drivers say they use their voice assistants daily. That usage is going up as the quality of the systems improves. Initially spotty, in terms of reliability and usability, 61% of drivers with connected car functionality confirmed their built-in voice assistants work well.

(“Consumers Do Not Want to Buy  or Drive” EVs? Not so in Europe)

A quarter of drivers with built-in voice control functionality are handling tasks they would otherwise take care of outside the car, such as texting (49%), shopping (9%) and searching sports scores (9%). This is in addition to using their voice assist for more typical in-car activities, such as navigating traffic (44%) and listening to music (33%).