Luxury and comfort at a lower price. 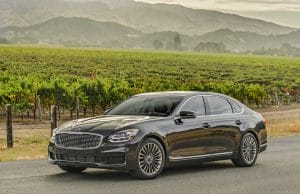 Big quiet sedans are still the vehicle of choice for riding in style and the Kia K900 offers plenty of both and quite a bit more.

Kia has astutely cultivated a middle-of-the-market position in a focused effort to move beyond the bargain basement image with which it was tagged after first landing in the United States in 1992. The fact that it sits at the top of the J.D. Power Initial Quality Survey ratings is a testament to the success of its overall strategy.

The South Korean automaker, however, describes the K900 as a vehicle that offers amenities that go well beyond Kia’s middle-market positioning and once you sit behind the wheel you can certainly understand its claims for the big sedan.

The K900 is not only aimed at buyers of Toyota Avalon and Nissan Maxima but also consumers interested in upscale models from Audi and Mercedes, who could be coaxed into doing an old-fashioned cost-benefit analysis of their spending on automotive transportation.

The price for the K900 certainly back up Kia’s ambition. The version I drove carried a manufacturers’ suggested retail price of $64,895, including the $995 destination charge. The price is hardly exorbitant or outrageous at a time when pricing for luxury vehicles is highly elastic and new models routinely now carry MSRPs well into six figures and wealthy buyers shop for even more exotic models costing more than a half million dollars. 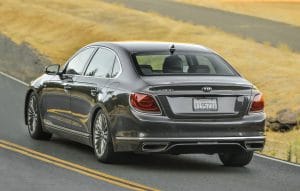 The exterior styling is on par with its competition while offering plenty of room for passengers.

But $65,000 is certainly not inexpensive and well beyond the comfortable middle-market space Kia has cultivated during the past decade and I suspect comes as a surprise to many of the dollars-and-sense-wise customers Kia has converted in recent years.

However, in keeping with the styling renaissance that has come over Kia and partner/rival Hyundai, the Kia 900 comes impressive exterior design that is sleek, modern and fresh all at once. The roof sweeps back into the rear deck while the balanced proportions and neat lines serve to enhance the car’s sleek appearance.

The exterior design is matched nicely, which artfully furnished, with upscale materials from fabric to accent touches that have the look and feel of a plush sedan from one of the traditional luxury brands such as Audi or Cadillac.

The seats in the K900 are most comfortable even on a longer drive. The visibility from the driver’s seat is excellent and the steering wheel is equipped with controls to change the source of entertainment or the sound level while the center stack with the navigation system and heating controls are within easy reach.

The cabin of the Kia K900 is very quiet and the South Korean automaker has made a series of improvements to the chassis for 2019 that filtered even more noise out of the cabin.

In addition, there is also a head-up-display with the speedometer and navigational prompts that help the drive keep his eyes on the road. Navigation system can be a distraction and I’ve always found the directional prompts most helpful.

The K900 also comes equipped with long list of comfort and convenience feature such as a heated heats and steering wheel, parking distance warning, digital driver-information system within the instrument cluster, LED mood lighting, smart key, surround-view monitor that will come into play as you start the car and back up and Bluetooth connection to aid with hand-free driving.

For a large sedan, the K900 is surprisingly nimble out on the road. The four-wheel disc brakes have plenty of stopping power and I thought the steering was precise and responsive. The suspension on the K900 also is well tuned and helps insure the K900 stays firmly planted on all kinds of road surfaces or on the tight curves found on freeway off and on ramps. 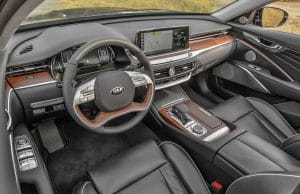 The K900 interior is bathed in leather and woodgrain with plenty of technology at the driver’s fingertips.

The overall driving characteristics of the K900 seem to belong to smaller mid-sized or compact sedan, making it a pleasure to drive, particularly on a long cruise on the highway.

The over driving dynamics are enhanced by the powertrain, which couple a 3.3-liter twin-turbo V6 with and 8-speed transmission and a dynamic torque vectoring all-wheel-drive system. The drive-train produces an impressive 365 horsepower and 376-foot pounds of torque. The torque is quickly evident when you push down on the accelerator and the shifts of the eight-speed transmission come along are very smooth and efficient.

The K900 also has a combined fuel-economy rating of 21 miles per gallon, blending 18 mpg in the city driving and 25 mpg on the highway.

Despite the popularity of utility vehicles, bid sedans still have an undeniable appeal because of their sophistication, which grows out of the care and attentional carmakers have lavished on the over the century. The Kia 2019 K900 is solid automobile quite capable of carrying friends and family in style over distances long and short.