Could be called Tusker in U.S. market. 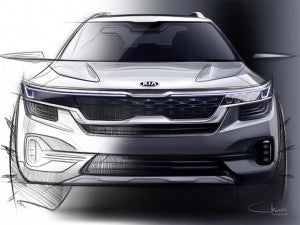 At the Seoul Motor Show in March Kia unveiled two concept vehicles hinting at how it plans to bookmark its SUV line-up. Now, it’s offering a pair of renderings that appear to show what the smaller of the two Korean concepts will actually look like in production.

The “new global small SUV” was indeed, “inspired by the 2019 Kia SP Signature Concept,” Kia confirmed in a news release this morning. But it left plenty of other questions unanswered, including the name it will give the new offering and the precise timing of its global roll-out.

“We have created a car which stands out everywhere, from the city to the countryside,” said Byung Chul Juh, head of styling for the Kia brand, adding that it will offer “a wide range of features and technologies that are universally suited to younger buyers in markets around the world.”

Translation: look for lots of high-tech touches, like Bluetooth, Apple CarPlay and Android Auto, among other things, specifically geared towards urban Millennials. 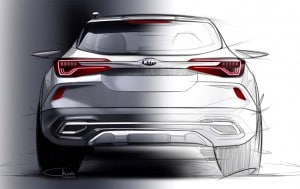 The skid plate and wide wheels in the rendering give the SUV a rugged look, but will they carry over into the production version?

(Click Here for a review of the new Kia Forte EX.)

Kia has been teasing us with concept versions of the upcoming crossover-utility vehicle for some time. A previous prototype, more succinctly dubbed the Signature, made its debut at the Auto Expo in Delhi last year. The version unveiled in Seoul, barely two months ago, was a lot more production-ready, as you can see by comparing the two new renderings with an image of the Korean show car.

There are, of course, plenty of familiar details, starting with the Kia signature “tiger nose” grille. Here, however, it is framed by slim, four-lens LED headlamps which, the maker emphasizes in its release, “brings a sense of luxury to its exterior design.” Whether LEDs will be standard on all models, and in all markets, remains to be seen, however.

There also are triple vertical LED bars built into the front bumper that appear to function as foglamps, with additional LED daytime running lamps that stretch nearly all the way across the front end, just below the hood shut line.

The rendering actually appears to take some liberties with what we’ll assume to be the final version of the new crossover, notably with arrowhead-like sideview mirrors that would simply not play in production. We’ll also have to wait and see if those wide, seemingly off-road-style tires will actually be offered, whether as optional or standard trim. We’d bet not. 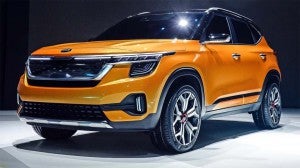 As for the tail, it largely echoes what we saw with the SP Signature Concept, including the wide taillamps speared by what appears to be a chrome bar running just under the back glass. The rendering also shows integrated dual exhausts in chrome trim mounted just below the rear bumper and above what looks to be a skid plate.

Could that suggest a ruggedized version, akin to what Jeep offers for the Renegade? Another reason we’ll stay tuned to find out more.

As for what’s under the hood, speculation following the debut of the SP Signature in Seoul focused on a 2.0-liter inline-four as the primary powertrain, though other options like will be made available in different markets.

The new crossover appears to be sharing the same platform as the new Hyundai Venue, the pint-sized crossover unveiled at the New York International Auto Show last month. So, expect them to share significant amounts of their underpinnings.

Venue measures 158.0 inches, nose-to-tail, of 5.1-inches shorts than Hyundai’s Kona, which had been its smallest utility vehicle, It’s a full 14 inches shorter than the Toyota C-HR, by comparison. The Venue is 69.7 inches wide, or 1.2 inches smaller than Kona and, at 99.2 inches, its wheelbase is 32 inches shorter. That said, its 61.6-inch height means it stands 0.6 inches taller than Kona. 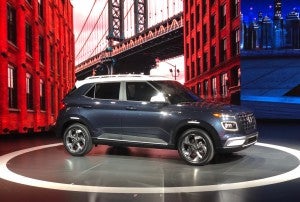 The Hyundai Venue made its debut in NY.

Meanwhile, Hyundai’s offering features a 121 horsepower 1.6-liter inline-four paired to either a six-speed manual of CVT gearbox, power directed to the front wheels, no all-wheel-drive package in the offing.

As for the name, it’s unclear why Kia wouldn’t keep the Signature badge but it can be difficult to garner rights to an appealing nameplate these days. The word that’s been leaking out indicates it might call the crossover the Kia Tusker.

In terms of timing, Kia tells us, “the new model will go on-sale in Korea in the second half of 2019, with sales in other regions to follow soon after.” That could suggest we’ll see it make its formal U.S. debut at the Los Angeles Auto Show next autumn.

(Click Here to check out the new Hyundai Venue.)