The new QX80 is loaded with technology and plenty of capability. 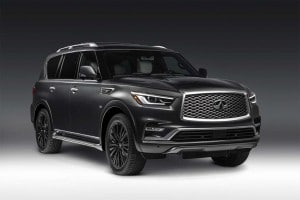 The 2019 Infiniti QX80 is enhances the luxury brand’s appeal among buyers.

Sales of big sport utility vehicles all but collapsed 10 years ago during the last recession but they have made a steady comeback because of their ability to carry multiple passengers in relative comfort.

While General Motors with vehicles such as the Cadillac Escalade and Chevrolet Suburban or the Ford Motor Co. with the Lincoln Navigator and Ford Expedition clearly dominate the full-size SUV segment, a handful of other big SUVs, such as the Infiniti QX80, also have staked a claim to the coveted territory.

The 2019 Infiniti is a big, roomy offering with plenty of elbow room for the driver and passengers, and nicely furnished with comfort-oriented features that customers seem to demand or expect in this type of vehicle, which are prized both for the imposing size, which set them apart from other vehicle and for their ability to carry anything and everything.

Infiniti, like its rivals for sales in this particular segment, also has made sure to load the QX80 with technology, including an eight-inch screen that houses Infiniti’s InTouch Navigation system in the center stack, Bluetooth for hands-free telephone calls, voice-recognition technology and Bose speakers to enhance the vehicle’s entertainment system. There are also dual eight-inch screens for passengers in the second-row seats, which generally are heavily used in these types of vehicles.

The also USB ports, 120-volt outlets and headphone jacks for the second-row passenger and features sonar assistance for parking in the front and rear, push-button start and remote start for cold mornings or extra-warm afternoons. 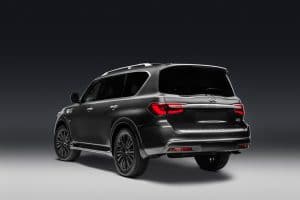 The QX80’s lush and comfortable interior is accented by the satin chrome trim used throughout the cabin.

Moreover, it is surprisingly easy to climb in and out of for such a big vehicle. A running board adds a nice bit of style to the transition from the outside to the interior in addition to helping with ingress and egress. Additionally, the third-row seats also fold down automatically.

The high-up seating position offers excellent visibility in all directions from the driver’s seat to the front over the long hood and the large, leather-wrapped steering wheel contains controls for the entertainment system and the cruise control for a longer drive.

As for the other controls close to the driver’s seat, I thought the buttons and other controls don’t seem to be in the most advantageous position. The blend of touch screen and traditional buttons isn’t optimal. However, their location and the mix, probably would not bother a regular driver who would likely quickly grow accustomed to the controls from for the heating and air conditioning system after touching them time and again.

At night, the lighting scheme inside the cabin and through the instrument cluster provided ample illumination without becoming a distraction. The nighttime lighting in a vehicle’s cabin is important but often overlooked as vehicles are evaluated.

I found that the QX80 is relatively nimble both on the highway and while driving in normal traffic. It has plenty of torque as it accelerates from a standing start at a light or stop sign and the suspension delivers a comfortable ride over varied surfaces as expected. The ride was nicely collected even on a dirt and gravel road I used to test out the QX80’s vehicle dynamics and the self-leveling rear-suspension clearly helped maintain the vehicle’s poise on different types of roads. 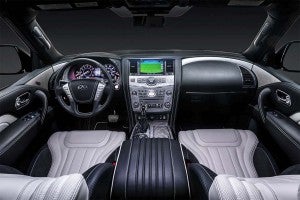 The interior of the QX80 is laden with the latest technology.

The 2019 QX80 is equipped with a 5.6-liter, V8 engine that delivers 400 horsepower and 413 foot-pounds of torque through a seven-speed transmission and augmented with four-wheel drive. Overall, the power seemed well matched to the and delivered a solid performance but the 15 mile per gallon combined city and highway EPA fuel economy rating could use a boost.

The 2019 QX80 is a conventional “two-box” SUV. It’s certainly handsome in its own way and Infiniti has dressed it up a bit with a handsome grille, lights and distinctive 22-inch wheel at the corners. Manufacturers are eager for the profits the big SUVs can produce and Infiniti has gone right along with trend, so the manufacturers suggested retail price of $91,450, including a hefty $1,295 destination charge.

Despite the price tag, the QX80 basically is a versatile vehicle that can be used for all kinds of purposes and in all kinds of seasons.