First new Infiniti battery-car “to be built in China, for China." 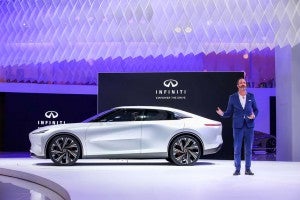 Infiniti has formally unveiled its new Qs Inspiration battery-car concept at 2019 Auto Shanghai and confirmed it will strongly influence the maker’s design direction as it begins rolling out its first all-electric models.

With its tall, blunt nose, and low, fastback roofline, the Qs is meant to “reinterpret” the traditional look of three-box sedan designs. Meanwhile, the flexible architecture underlying the Qs will wind up being used for an array of upcoming battery-electric vehicles, or BEVs.

Eventually, Infiniti officials have said, the goal is to offer battery-based powertrains for all of the Infiniti line-up, whether plug-in hybrid or pure electric. But the automaker noted that its first BEV will be “built in China, for China.” That comes as no surprise to many industry observers considering the New Energy Vehicle mandate enacted in late 2017 which has already transformed China into the world’s largest market for plug-based vehicles.

“China has the most growth potential for electric vehicles globally, especially in the premium segment,” said Christian Meunier, chairman of Infiniti Motor Company. “The age of electrification presents us with an opportunity to renew our credentials as an innovative challenger brand, ready to move quickly and decisively in this growing and exciting area of the market.” 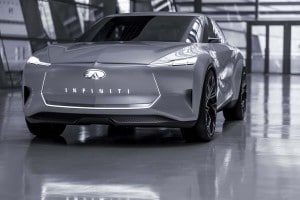 The blunt nose on the Qs Inspiration reminds some of the brand's original Q45 sedan.

The Qs Inspiration, like the Q Inspiration and QX Inspiration concepts that Infiniti has rolled out over the last two years, are meant to highlight a different design direction for the brand. That’s partly enabled by the fact that its future battery-cars will ride on skateboard-like platforms with the batteries, motors and other key drive components mounted under the load floor. That frees up space normally devoted to the engine compartment to be reused for passengers and cargo.

Exactly what Infiniti’s first production battery-electric vehicle will look like is uncertain, though the Chinese luxury market remains more sedan-focused than the U.S., where SUVs are rapidly taking over. The ute-like QX Inspiration that debuted at the last Paris Motor Show could provide a hint of what will come to the States.

As for the Qs, it strikes some observers as the modern-day equivalent of the original Infiniti flagship, the Q45, here minus that 1990 model’s distinctive Cloisonne belt buckle and oversized grille. Indeed, without an internal combustion engine up front, there is little need for cooling air, something that already has reshaped front-end battery-car design for manufacturers like Tesla and Jaguar.

“As designers, we are constantly inspired by the technology of our engineers and the Japanese design influences which are part of our DNA,” said Alfonso Albaisa, senior vice president for Global Design, Nissan Motor Company. 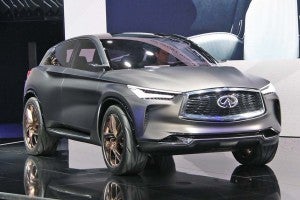 The original Q45 was a standout on the powertrain front, as well, with its original, 4.5-liter V-8 making 276 horsepower, a lot for its day. It also offered what was billed as the world’s first active suspension system.

Today, even minivans offer similar power and if the Qs Inspiration is meant to signal what a new Infiniti flagship will look like, it would have to deliver substantial larger numbers, perhaps 400 hp or more. As for range, 300 miles, using the EPA test ratings, would be the minimum that would get a flagship model taken seriously.

Exactly what the Nissan luxury brand has coming it has yet to say, but Infiniti has a history of using concept vehicles to signal what will be going into production. So, the Qs Inspiration is likely to have a very strong influence on the brand’s upcoming battery-electric sedan.