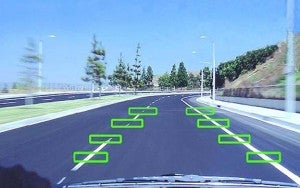 Lane Departure Warning systems help you avoid drifting across the road – but their buzzers and beeps are a frequent source of complaints.

Buy pretty much any new car on the market today, whether a luxurious Mercedes-Benz S-Class or a base-priced Hyundai Accent, and you’re likely to find they’re equipped with an array of advanced driver assistance systems.

While features like blind-spot detection, forward collision warning and lane departure warning have been shown to prevent accidents and reduce the risk of injuries and deaths, “ADAS” technologies have been generating frequent complaints, according to a new study by J.D. Power and Associates. Bothered by annoying warning sounds an alarms activating when there is no apparent danger, Power found, many motorists are disabling systems designed to protect them.

“Automakers are spending lots of money on advanced technology development, but the constant alerts can confuse and frustrate drivers,” said Kristin Kolodge, Power’s Executive Director of Driver Interaction & Human Machine Interface Research. “The technology can’t come across as a nagging parent; no one wants to be constantly told they aren’t driving correctly.”

(IIHS study finds not all  crash avoidance systems work as well as they should, especially detecting pedestrians. Click Here for more.) 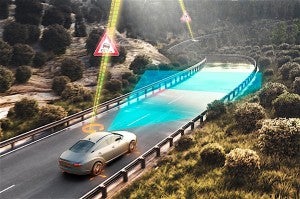 Forward ollision warning and auto-brake systems can use a variety of laser, radar and/or camera sensors

The problem needs to be addressed quickly, according to Power and other industry observers, if for no other reason than the fact that these driver assistance systems are set to become even more prevalent in the years ahead. Where individual features were once sold as high-cost options, automakers increasingly have come to bundle them in the form of packages that can be added at relatively low cost or, more and more, as standard features. Ford, Toyota and Subaru are among the mainstream brands making at least basic ADAS packages standard fare across most of their models.

On the positive side, these technologies can play a significant role in preventing crashes, according to research by both the Insurance Institute for Highway Safety and Consumer Reports. The non-profit publication in June reported that 57% of the members it surveyed said ADAS helped prevent at least one possible crash. Research has shown that technologies like forward collision warning with auto-braking can reduce the severity of a crash when one does occur.

But these technologies can’t work when turned off, something most vehicles allow a motorist to do. That is common, both Power and IIHS have found, especially with safety systems prone to activate when there is not an actual emergency, or where they sound annoying warnings like loud beeps and buzzers.

Among the systems most commonly complained about is lane-departure warning, which is designed to alert a motorist when drifting out of a lane, as well as the more advanced lane-keeping assist, which will nudge a vehicle back into position if it crosses a lane marker.  The new Power study found 23% of customers with these two technologies complaining they are “annoying or bothersome.” Among those who complained, 61% said they would sometimes disable the systems entirely. And they were far less likely to say they’d want the technologies on their next cars.

“The technology can’t come across as a nagging parent; no one wants to be constantly told they aren’t driving correctly.”

Automakers have been exploring ways to make ADAS technologies less bothersome and more effective. That includes ways to reduce the sensitivity of sensors – as Hyundai allows for lane departure warning on products like the Veloster – and alternative alert methods.

Instead of sounding a loud buzzer when a vehicle crosses a lane marker or might back up into a pedestrian or another vehicle, many General Motors vehicles use a seat cushion that vibrates in the direction of the problem. Porsche vehicles alert a motorist drifting out of their lane by subtly vibrating the steering wheel and using the car’s speakers to create a sound like a driver would experience running over a rub strip on the shoulder of a highway. Lincoln recently began switching to alert tones recorded by members of the Detroit Symphony Orchestra. 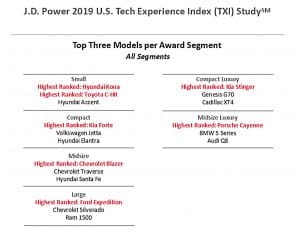 (Crash avoidance technology can be expensive to repair, even after minor collisions. Click Here to find out why.)

“Some brands are succeeding at making their safety technology effective without being overbearing,” said Koledge. “Some are good at one aspect but weaker at another, and some are struggling with both. This is why one brand has 90% of its customers wanting lane-keeping/centering on their next vehicle, while another brand has just 59% of its customers saying the same thing.”

The new J.D. Power study also found that many motorists don’t really understand what some of the new technologies do, a problem complicated by the use of different names for the same feature. A study released earlier this year by AAA found that there are as many as 40 different terms used for forward collision warning, a system that can use radar, laser or cameras to watch traffic up ahead. Basic versions sound an alert when a crash may occur. More advanced versions can apply the brakes automatically if a driver doesn’t respond quickly enough.

Though automakers, as well as federal regulators, have received numerous complaints about malfunctioning forward collision warning systems — with several recalls involving auto-braking technology – Power’s study found that a majority of motorists still want that and other collision avoidance systems on future vehicles. The challenge for manufacturers, the research firm stressed, is to make the systems both more effective, more intuitive and less intrusive in ways that would lead drivers to shut them off.

(Toyota, Suzuki team up on development of autonomous vehicles. Click Here for that breaking story.)