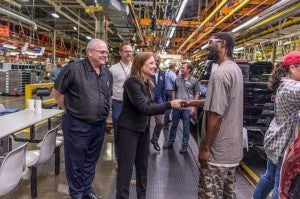 GM Chairman Mary Barra talks with workers at the company’s Fort Wayne truck plant where it plans to invest $24 million to expand production.

General Motors, which is facing a major challenge from competitors eager to chip away at its market share in the valuable full-size pickup truck segment, could face new difficulties at a key truck assembly plant.

Rich LaTourneau, chairman of the UAW Local 2209 shop committee, outlined the union’s concerns in a memo reviewed by thedetroitbureau.com.

“The plant is heading into a major manpower crisis as we enter into July,” LaTourneau said.

“The local parties have fulfilled our contractual obligation by signing our temp request to cover the 16% vacation replacement outline in our local contract. We applied with our request back in March for a total of 259 (temporary employees) to cover our vacation requests. We currently received about 80 of those summer replacements. 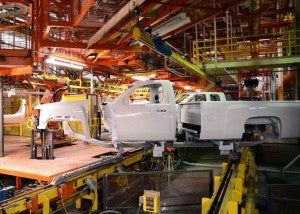 GM is being sued by the UAW for using temporary workers at the plant instead of laid-off employees.

“We have given GM and third-party hiring firm many alternatives to populate this group without success. We will continue to be short. Even if the company put in to hire permanent people, we won’t get them until after July,” LaTourneau said.

“Based on approved vacations for July we will be short several hundred people,” LaTourneau said.

LaTourneau also said the company has exhausted the temp pool. The use and “abuse of long-term temps is starting to catch up with GM and people are just not interested. If you have friends and family looking for work www.applytogm.com, LaTourneau added.

“GM is confident that we will manage our summer staffing needs and continue to support truck production at Fort Wayne,” the company said in a statement.

(UAW Sues General Motors Over Use of Temporary Workers)

The use of temporary employees is expected to emerge as a major issue during the UAW’s negotiations, with not only GM, but also Ford Motor Co. and Fiat Chrysler Automobiles N.V., which will open later this month. 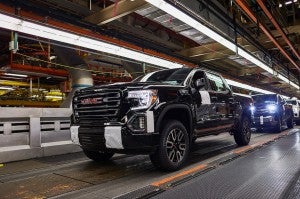 Strong sales of the GMC Sierra, above, and its Chevrolet sibling, the Silverado, drove the need for temporary workers at the Fort Wayne plant.

The union, after agreeing to give the companies more latitude in employing temporary employees in the 2015, is gearing up to push for new limits on the use of temporary employees. Instead the union is expected to make more positions full-time.

Thestarting pay for temporary workers is $15.78 per hour, compared to the $31 per hour by full-time employees, who have completed the six-year “grow-in” period required to reach the top of the wage scale. In addition, full-time employees are entitled to more benefits.

In addition, temporary employees are easier to lay off and cost less to idle during a contraction in production, according to analysts, making them an attractive option for automakers.

Chuck Stevens, GM’s former chief financial officer, who retired last year, told analysts two years ago that the company wanted to have 50% of the worked in GM’s factories done by temporary labor. The wider use of temporary labor would help GM reduce costs, he said.