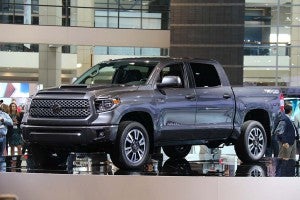 The move to put the Tundra and Tacoma on the same platform means changes at its San Antonio, Texas plant.

Just a few days after it was revealed that Toyota Motor Corp. would convert its $1.6 billion Alabama plant to SUV production from car production, the company is reportedly planning to spend as much as $398 million to optimize its San Antonio truck plant.

The plant, which builds the Tundra and Tacoma, will be reconfigured to boost production of the trucks, as the demand for pickups in the U.S. continues to rise. The move is part of a revision of the company’s truck strategy, Automotive News reported.

The final amount of money that will be invested has yet to be finalized, according to the story, but those numbers are expected to be determined between now and the end of August.

While the upgrades won’t result in any new jobs, the investment would boost the plant’s capabilities through the installation of additional robotics and other technologies, Toyota plant officials said.

The company has big plans for its truck line-up. During the auto show season, it unveiled new specialized iterations of the Tundra and Tacoma aimed drawing in more buyers. Truck sales are up overall and buyers appear to be willing to consider their non-traditional options.

Ram just moved ahead of Chevrolet into second place in monthly sales for all of the second quarter. Toyota’s truck results have been a mixed bag.

Through the first half of the year, U.S. sales of the Tacoma were up 4.8% to 121,866, while sales of the Tundra were down 2.3% to 54,497. The Tacoma is the leader in the midsize truck market, but the segment is getting new players like the newly re-introduced Ford Ranger. Ram is also rumored to be considering a return to the segment.

Toyota’s full-size Tundra has struggled to try to compete with the players in that market. The current model Tundra and Tacoma are built on a shared assembly line in San Antonio. That becomes important as the next-generation pickups will share the same platform.

The automaker is working up a common architecture, internally codenamed “F1,” according to a report in Automotive News and confirmed by TheDetroitBureau.com’s own sources. It is likely to be ready to go by late 2020.

The move would echo what Toyota is in the midst of doing in other areas of its line-up. The launch of the fourth-generation Prius hybrid brought with it the debut of the Toyota New Global Architecture, a flexible architecture that eventually will underpin a vast array of passenger cars and crossovers.

(Toyota Set to Unleash a Flood of 19 New Products)

“Toyota New Global Architecture (TNGA) has been successfully implemented on many of our new cars and SUVs, Toyota said in a statement. “While we’re always exploring ways to improve upon our efficiency we have nothing to announce in regards to trucks at this time.”