The system doesn't use safety drivers. 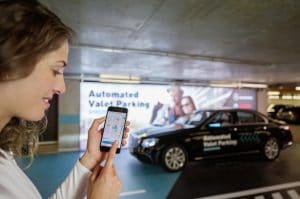 Driverless parking in real-life traffic is now possible at the Mercedes-Benz Museum due to the Daimler AG and Robert Bosch GmbH partnership.

Daimler AG and Robert Bosch GmbH have gained approval to experiment with an automated driving system that won’t employ a “safety driver.”

Until now, experiments with self-driving vehicles by companies such as Waymo, Uber and Cruise Automation, GM’s automated-driving unit, have used had development drivers riding along in the vehicle to track its progress.

Even then the systems sometimes failed as in the case of an automated vehicle being tested by Uber, which killed a bicyclist in Arizona in 2018.

But Daimler and Bosch have obtained approval from the authorities in German state of Baden-Württemberg for their automated parking system in the Mercedes-Benz Museum parking garage in Stuttgart, not far from the headquarters of both Daimler and Bosch.

The automated valet parking service is activated via a smartphone app and requires no safety driver. This makes it the world’s first fully automated driverless SAE Level 4 parking function to be officially approved for everyday use, according to a statement issued by the two companies.

“Automated valet parking is the world’s first infrastructure-based solution for a fully-automated parking service to have been approved by the authorities,” said Markus Heyn, member of the board of management of Robert Bosch.

“Driverless driving and parking are important building blocks for tomorrow’s mobility. The automated parking system shows just how far we have already progressed along this development path,” Heyn said.

Michael Hafner, the head of drive technologies and automated driving at Daimler AG, said the project at the museum in Stuttgart will pave the way for other automated valet parking initiatives in the future. “This approval from the Baden-Württemberg authorities sets a precedent for obtaining approval in the future for the parking service in parking garages around the world,” he said. 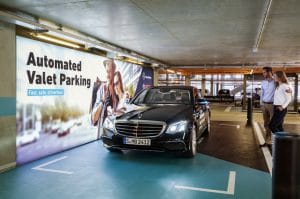 Several other European countries and individual states in the U.S. have approved the use of experiment self-driving vehicles under limited conditions by automakers and tech companies.

Daimler and Bosch have insisted their top priority for the driverless parking service was safety. Since there is as yet no official approval process for automated driving functions that do not require a driver, the local authorities – the Stuttgart regional administrative authority and the state of Baden-Württemberg’s transportation ministry – oversaw the project along with experts from the German certification authority TÜV Rheinland.

The authorities are satisfied the vehicles in the valet parking demonstration will comes to a halt when it encounters an obstacle. They also set up secure communications between all system components and took steps to ensure the reliable activation of the parking maneuver.

Later, the car returns to the drop-off point in exactly the same way.

This process relies on the interplay between the intelligent parking garage infrastructure supplied by Bosch and Mercedes-Benz automotive technology. Bosch sensors in the parking garage monitor the driving corridor and its surroundings and provide the information needed to guide the vehicle. 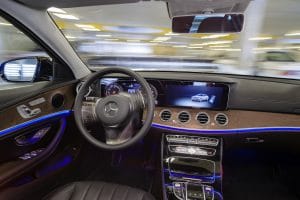 The system has the driver recall the vehicle once they return to the parking garage.

The technology in the car converts the commands from the infrastructure into driving maneuvers. This way, cars can even drive themselves up and down ramps to move between stories in the parking garage. If the infrastructure sensors detect an obstacle, the vehicle stops immediately.

The progress in the development of self-driving vehicles has been impressive in the past decade. However, skeptics note the experiments with automated vehicles have been limited to tightly controlled environments such as a parking garage where everything is mapped out precisely for the vehicle’s artificial intelligence.

Automated driving is more difficult in an environment where the self-driving vehicle must contend with unexpected obstacles, missing traffic signs and signals and other drivers who intentions are unclear or are driving erratically at varying speeds, skeptics note. Even champions of artificial intelligence acknowledge that teaching an AI system to drive is more difficult than using it for a less complex task such as medical diagnosis

Bosch and Daimler started developing fully automated driverless parking in 2015 and in the summer of 2017, their pilot solution in the Mercedes-Benz Museum parking garage in Stuttgart reached an important milestone: automated valet parking in real conditions, with and without drivers at the wheel, was presented to the public for the first time.

The initial step was followed by an intensive testing and start-up phase. Starting in 2018, museum visitors could use the parking service live, accompanied by trained safety personnel and share their experience.

One aspect of the pilot project involved testing lighting concepts on the vehicles. Turquoise lighting indicates that a vehicle is in automated driving mode and informs passers-by and other road users that the vehicle is driving itself.