Deal with Mobile Gaming Company May Save Faraday Future

California-based EV maker to launch a “two-brand strategy” in China. 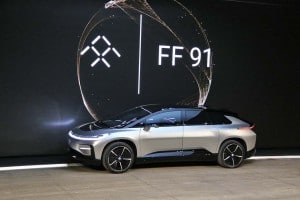 Faraday Future has been at death's door for several months now, but a new deal with an investor may clear the way for its return to life.

Once again, struggling battery-carmaker Faraday Future may have found a way back from the abyss, this time with the help of Chinese mobile gaming company The9 Limited.

The California-based FF is getting a $600 million lifeline from The9 as part of a new, 50/50 joint venture that will target the Chinese market with a new battery-electric vehicle based on Faraday’s FF91 concept.

The announcement comes less than three months after FF was able to terminate a prior deal with Evergrande Health, a deal that went south when the Chinese company reneged on its agreement to buy 45% of the carmaker for $2 billion that would be paid out through 2020. That left Faraday in dire straits, forcing it to lay off the majority of its staff and order pay cuts for those remaining.

(Faraday Future may have a future after all. Click Here for the story.)

Faraday had previously seen other funding dry up, including much of the money that was originally promised by Jia Yueting, a Chinese tech billionaire. That had forced FF to abandon its original plans to set up a factory outside Las Vegas. It has since found another facility in Central California.

The company noted in a statement that it is continuing to develop the FF91 and hopes to begin production of that ultra-luxury model at the Hanford plant by the end of this year. But the new partnership with The9 will result in the launch of a new brand, V9, and the creation of a different battery-car for sale in China.

“I believe that FF’s strategic vision and product concept will be perfectly integrated with the Internet and user operation genes of The9 to realize the smooth operation of FF flagship products in China,” said Jia, who retains an ownership stake in Faraday.

The investment will help the carmaker overcome its “short-term cash flow difficulties,” the company said in a statement, while launching a two-brand strategy.

(Click Here for more about why Faraday Future insists it isn’t going away.)

“FF has the industry leading product technology and strategies, and a team of world-class top talents and resources,” said Jun Zhu, CEO of The9. “Leveraging the technology capabilities of FF, we believe our alliance with FF provides us with a great opportunity to pursue the fast-growing market of electric vehicles in China. We look forward to a long and successful relationship with FF and we honor this step to diversify our business portfolio as a high-tech Internet company.”

Though Chinese investors have always been the primary source of funding for Faraday Future, the company was, until now, focused on U.S. production. The decision to now target China itself makes sense from at least one key standpoint: the Asian nation is now the world’s largest market for battery-electric vehicles.

In late 2017, the Beijing government enacted the “New Energy Vehicle,” or NEV rule, putting an emphasis on plug-based products. The carrot-and-stick mandate sets minimum sales targets but also offers incentives to both manufacturers and vehicle buyers.

The deal between the carmaker and the mobile gaming company doesn’t mean Faraday is entirely back on solid ground. The9 is making just an initial $5 million payment, with the rest of the $600 million deal “contingent on satisfaction of funding conditions.” Neither partner is saying what those conditions are. A spokesman for Faraday has not yet responded to a request for comment.

The9 primarily focuses on gaming development but is also moving into the blockchain arena. It has a market capitalization of about $100 billion.