Make Room in Your Garage for the Octocopter

Ohio start-up wants to have this 2-person drone in the air by mid-2020. 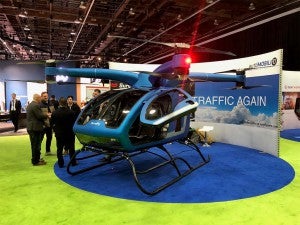 With highway congestion getting worse and worse in most major cities, there’s plenty of talk about flying cars and cabs that could leapfrog traffic, and a small Ohio start-up is determined to be the first one to take to the air.

More than 90 years after Henry Ford gave up on his Flying Flivver project, Columbus-based Workhorse Group is seeking FAA approval for its SureFly Octocopter, something that could come as early as mid-2020. The company is already taking orders for what is essentially a flying drone.

In fact, the Octocopter on display this week at the North American International Auto Show looks a lot like the popular drones marketed by DJI and could have just as many uses, Workhorse CEO Steve Burns saying his company is already talking with farmers, firefighters and the military – never mind individual customers who like the idea of having something so easy to fly.

“If you can fly a drone, you can fly this,” says Burns, who previously served as CEO of AMP, a battery-electric vehicle start-up. 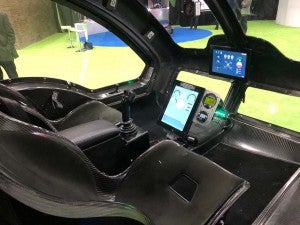 There are just two controls for the SureFly: a throttle and a point-and-aim joystick.

Unlike a conventional helicopter, the Octocopter has four arms mounted to the top of its cabin, each holding twin motors, or eight in all. They each normally generate about 20 kilowatts of power, with a peak of 30 kW during take-off and landing or in heavy winds.

The motors are all-electric, which means they are less complex – and significantly easier to maintain – than those on a conventional helicopter. That’s a big plus because maintenance is one of the biggest, and costliest, hurdles to helicopter ownership.

So is getting rated to fly one. Helicopters require a pilot to be using both hands and feet and many wannabe pilots wash out during training. The Octocopter has just two controls, one setting speed and the other a computer game-like joystick that lets you “point where you want to go,” explains Burns, adding that the onboard computer system does the rest. To keep the craft flying smoothly, even in rough air, the individual motors can adjust their speed as much as five times a second.

Power from the motors comes from a hybrid system that pairs a small internal combustion engine to a 6.5 kilowatt-hour lithium-ion battery.  The IC engine can operate on either diesel or jet fuel. It is there solely to generate electricity for the motors. The primary purpose of the battery is to provide back up power in an emergency, enough, say Burns, to let the Octocopter lands.

The company eventually hopes to fly a fully electric model but says today’s batteries are just too heavy. And, indeed, weight is a critical issue. To minimize mass, Workhorse engineers have turned almost exclusively to carbon fiber, though the landing skids are made of aluminum, which can be more forgiving in a hard landing.

Take-off and landing simply require use of the throttle and, by the time the Octocopter is approved for production, Burns says, it may get new software that, like many of today’s small drones, automatically controls lift-off and landing. 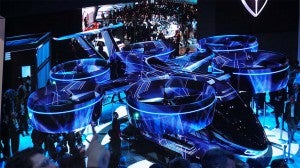 There are plenty of other companies hoping to take to the air, including Bell which showed off its five-rotor Uber airtaxi at CES last week.

“We hope to prove this is safer to take to a destination than to drive there,” says Burns, something that could convince the FAA that an operator would only need a recreational Sport Pilot license. That generally requires just 20 hours of flight time, about half of the time for a regular pilot’s license.

(Flying cars are zooming towards take-off. Click Here for more.)

There could be some modest tweaks to the Octocopter by the time it goes into production. Among other things, Workhorse is looking for ways to simplify the traditionally complex process of “laying up” carbon fiber. But the target is to have it capable of flying up to 75 miles at speeds up to 75 mph carrying two people or 400 pounds total. A military version rated at up to 650 pounds also is in development.

Six months into what could be a two-year FAA review process, Burns says his company is now taking $1,000 deposits for the SureFly Octocopter, though he won’t say how many it has already received. The target price, once it gets certification, will be around $200,000.