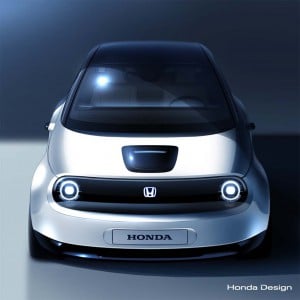 Honda will bring a production version of the Urban EV Concept to Europe in the coming year.

Honda plans to use battery power of one form or another in two-thirds of the vehicles it sells by the end of the next decade, and the Japanese automaker plans to give a sense of where its “Electric Vision” is going at the upcoming Geneva Motor Show.

The Honda Urban EV Concept builds on an early prototype shown at the 2017 Frankfurt Motor Show and is little more than a thinly disguised version of the battery runabout it soon will be launching in Europe.

“Honda’s new electric vehicle is developed with a focus on functionality and purpose and the prototype sketch demonstrates this through its clean, simple and unique design,” the automaker explained in a statement accompanying this teaser shot. “A mass production version of the car will be on sale later in the year.”

(Toyota teaming up with Panasonic on next-gen batteries. Click Here for the story.)

Appearing to be about the size of a Fiat 500e battery-electric model, Honda’s minicar will clearly be targeted at the European market. Demand for electrified vehicles grew sharply in the EU last year, especially for plug-in hybrids which outsold conventional hybrids for the first time, according to industry data. There are some expectations that pure battery-electric vehicles, or BEVs, could top PHEVs in 2019 as more longer-range models come to market. 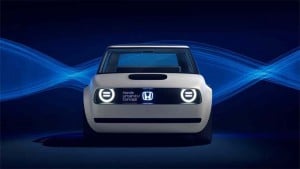 Some changes from the 2017 Urban EV Concept are apparent but they share headlights.

While Honda was one of the first automakers to get into the conventional hybrid segment, with its original Insight model, it has been slower to add plug-based products. Its only fully electric offering, a version of the Clarity line – which also includes a hydrogen car and a plug-in hybrid – offers barely 100 miles per charge.

The Japanese carmaker isn’t yet saying what range the production version of the Urban EV will deliver, though most new BEVs have been targeting a minimum 200 miles per charge. Honda may not feel that necessary for a vehicle focusing on Europe’s urban drivers who don’t necessarily log the sort of miles that Americans routinely clock. But that could limit its broader global appeal. E

ither way, Honda appears to be ruling out the idea of bringing the Urban EV to the U.S. market, at least anytime soon. 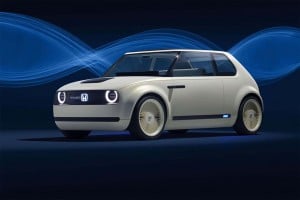 It appears unlikely Honda will bring the Urban EV to the U.S., at least anytime soon.

The latest “concept” retains the five-door hatch body style of the original, 2017 prototype, albeit slightly. It also keeps the original, round headlights, as the accompanying shots of both the new and earlier BEVs illustrate.

It is believed that the production version of the Honda Urban EV will adopt the now-normal skateboard platform that places its battery pack below the load floor. It’s also expected to use a single electric motor driving the front axle.

Don’t expect particularly sporty performance, though the inherent torque of electric motors could provide a reasonable kick off the line.

For those who want something a bit more peppy, keep an eye out for a production version of the Honda Sport EV Concept that also debuted in Frankfurt in 2017.

(Tesla gets go-ahead to sell Model 3 in Europe. For more, Click Here.)