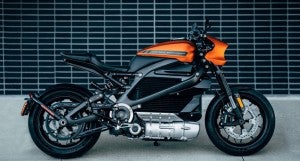 Harley-Davidson made almost no noise with its announcement at this year’s Consumer Electronics Show in Las Vegas — its first-ever all-electric motorcycle is now available for pre-order at dealers.

Named LiveWire, the electric bike starts at $29,799, and is available this fall.

The breakthrough bike is nearly silent compared to its gasoline-powered siblings, and with its battery-electric motors, it’s faster too, sprinting from zero to 60 mph in just 3.5 seconds. LiveWire was on display at the show along with two other battery-electric concepts.

“We’re at a historic juncture in the evolution of mobility, and Harley-Davidson is at the forefront,” CEO Matt Levatich said in a statement.

(Good news/bad news from Harley-Davidson. Click Here for the story.)

The bike will be able to travel about 110 miles on urban roads on a single battery charge, according to the company.

LiveWire’s electric motor has no clutch and no gear shifting is needed, making it an appealing option for first-time riders. The bike can capture energy from braking and add a charge to the battery, which is helpful in extending range while riding in stop-and-go traffic.

Harley’s new entry can be charged from a standard household electric outlet using a cord stored under the seat. Additionally, owners will be able to locate charger stations using an app. Dealerships that sell the electric bikes will also have charging stations.

(Click Here for details about BMW’s Vision Next motorcycle.)

In many ways, the new motorcycle is just like its four-wheel kin. Owners can use an app tied to a system called H-D Connect, to check the battery’s charge status and available range. H-D Connect also tells owners where the bike is parked, and the owner can be alerted if bike is moved or tampered with. LiveWire can be tracked by GPS if it is stolen.

Much like other EVs, LiveWire uses a color touch screen for an instrument display as well as navigation, music and other options. The screen is tilt-adjustable allowing the rider to set up the best viewing angle. A small, 12-volt lithium-ion battery powers the controls, instrument display, lights and horn.

(To see more about the to and fro between Harley and Trump, Click Here.)

The new bike gives Harley a new focus with the public after President Donald Trump criticized the company after officials said Trump’s then newly introduced tariffs would cost the company $100 million and it was looking at manufacturing bikes for other countries outside the United States.