Practical, yet stylish and laden with technology. 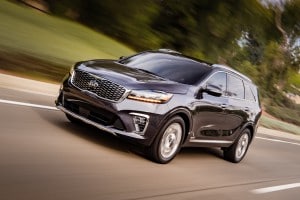 The 2019 Kia Sorento offers practicality, but with plenty of upgrades.

Practical is usually the word associated with sport-utility vehicles and that practicality makes them appealing to a wide cross section of consumers.

The Kia Sorento certainly is practical, but in a segment crowded with a lot of very good vehicles it is also stylish, loaded with features and comes with an interior that looks as if it might belong in a more traditional luxury vehicle.

The up-level version of Sorento that I drove carried a sticker price of $48,020, which includes the $990 transportation charge so it can hardly be considered inexpensive.

The first thing you notice about the Sorento is the exterior styling, which reaches beyond the conventional look that seems to blur the lines between the different brands that have settled into the segment.

(Kia has more Soul(s) than ever. Click Here for the story.)

The Sorento has the height comparable to other midsized SUVs but its sheet metal is sleek and gives the vehicle an air of refinement that competitors often lack. The exterior details, including the lighting, grille, door handles and design of the rear lift gate, complement the Sorento’s overall appearance giving it a sense of proportion and balance that isn’t easy to achieve in a segment where the front fascia seems to get most of attention and care. 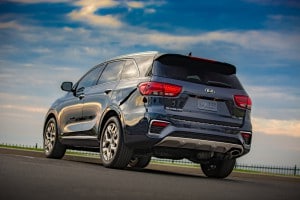 The new Kia Sorento offers plenty of room with a slew of technology upgrades.

The same emphasis on sleek simplicity also carries over into the interior of the vehicle where the clutter on the instrument panel, which seems hard to avoid in the world of increasingly sophisticated and evolving technology where the user experience can sometimes get lost. The cabin is also quiet, helping ease the stress of the commuting or a drive through heavy traffic.

The Sorento, however, puts all the relevant controls within easy reach and the controls tacked on to the steering wheel are easy to decipher and manipulate even if when you happen if wearing a pair of gloves. At night, the lighting in Sorento’s cabin is also well modulated; making it easy to read the instrument cluster and information displayed immediately behind the steering wheel or in the center stack where the navigation and entertainment screens are located and a Bluetooth link for hands-free calling while driving.

The surround-view camera, one of the pieces of technology found on the Sorento, also puts up a clear picture of everything around the vehicles. The Sorento SXL that I drove also came with a full suite of driver assist features such as blind spot detection, lane-keep assistance and cross-traffic alert. Forward collision avoidance with smart cruise control is also available on the Sorento.

The Sorento earned a five-star rating from the National Highway Traffic Safety Administration in frontal and side-impact crashes and a four-star rating in roll over crash. It is also equipped with multiple air bags, including a side air curtain, which important since SUVs are meant to carry passengers in the rear seats. Three-row seating is standard on all various trim levels, making it a good candidate for ferrying passengers to games or various outings.

The visibility from the Sorento’s driver’s seat, traditionally one of the most salient selling points for any SUV, is excellent and enhances the command seating position, which is another big selling point in any SUVs.

(Click Here for more about the new Kia Telluride.) 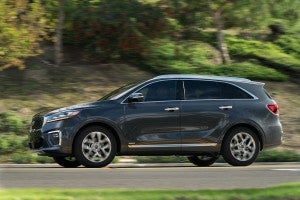 The Kia Sorento offers a command seating position for the driver with an unobstructed view around the ute.

The lighting scheme on the instrument cluster and the center stack in the Sorento also make the information visible even in the sunlight. Moreover, the vehicle’s seats are also comfortable even on a longer drive or commute and there is plenty of storage space – and cup holders – those who like to sip coffee, water and soda as they drive.

The Sorento’s ride quality is very comfortable over all kinds of pavement or on dirt roads thanks to improvements in the suspension system both in the front and the rear of the vehicle. The overall driving dynamics is also solid with good brakes and a steering is quick and accurate. It is aided by an electric power, which helps enhance the steering feel and help make the Sorento quite maneuverable in tight quarters such as parking decks.

The driving dynamics in the Sorento are also enhanced by electronic elements such as traction control and electronic stability control.

The 2019 Sorento that I drove for a week in and around Detroit was equipped with a V6 engine and an eight-speed transmission that’s been used on other Kia vehicles, such as the Cadenza. 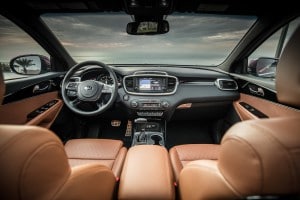 The interior of the Sorento provides a near-luxury feel in some trim levels, with plenty of interior space.

The shifts, I found, were smooth and virtually invisible in all kinds of situations such as entering or exiting a freeway or pulling away from a standing start on a subway. The V6 engine produces 290 horsepower and 252 foot-pounds of torque. It’s also capable of towing up to 5,000 pounds.

The model I drove was equipped with all-wheel drive and offered extra stability on rain-slicked streets, which is valuable where I live since Detroit seems to have more wet days than Seattle.

I think the exterior styling of the Sorento helps it stand out in a crowd and is also quite practical if you’re looking for a vehicle that carry passengers and their gear under all sort of conditions.