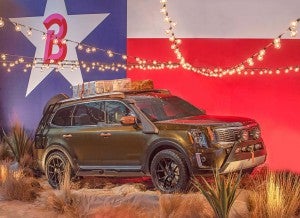 Kia's new Telluride Concept is all but production ready -- minus the hat box.

It had all the accessories you might expect on a rugged new SUV, including brush guards, a snorkel for fording deep water and a ladder meant to make it easier to get up to the Kia Telluride’s big luggage racks. But there were also a few things you likely wouldn’t expect, including the leather-wrapped sideview mirrors and the transparent hatbox tied down on the roof rack.

It was all in keeping with the theme of the evening, the new Telluride sharing the stage with designer Brandon Maxwell’s launch of his fall clothing line during New York’s annual Fashion Week. Maxwell, a 33-year-old star in the garment industry, has developed close ties with Kia and may even lend his name to future special editions, he and Kia officials told TheDetroitBureau.com at the weekend event.

Automakers have been looking for ways to stand out from the crowd, increasingly searching for alternatives to classic car show product debuts. Kia is just one of several automakers who were active during Fashion Week. The tie-up to Maxwell made sense considering the Texas native’s focus on his down-home roots in this year’s collection.

“I wanted something very sleek and sporty and the Telluride felt very natural for me,” explained Maxwell, after the fashion show wrapped up. 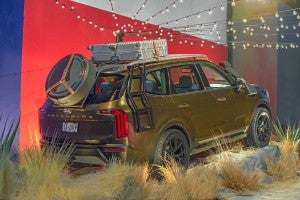 Like several other new crossovers, Kia has gone with a more classic SUV look for Telluride.

The fact that Telluride itself is in Colorado a couple states away, can be ignored, of course. But what’s more important is that Kia’s audience for the new three-row SUV likely will use it as a family people-mover is far more important.

We got a first hint at where Kia was going with a concept version of the Telluride several years ago. And the model that debuted this past weekend is also being billed as a show vehicle, though Kurt Kahl, the Kia designer who led the development of the new ute told TheDetroitBureau that, with a few exceptions, “It’s the production car.” Just look past the snorkel, bumper-mounted, spare, ladder.

That said, just about all the accessories revealed in New York really look they could be fitted onto the production Telluride – save for the leather-wrapped mirrors and hatbox. Kahl and his team opted to move away from the soft-roader styling of previous Kia crossovers, delivering a more classic SUV design, with a bold, upright grille, high-rising hood and flared fenders. If you didn’t know better, you might even wonder if the company decided to revive the underpinnings of its old Borrego, using it to challenge such classic body-on-frame platform competitors as the Chevrolet Tahoe. 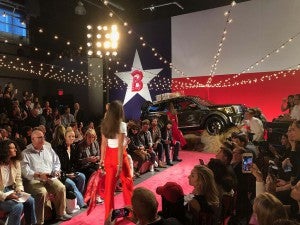 The Kia Telluride Concept served as backdrop for the debut of Brandon Maxwell's new line.

In fact, the new, car-based platform is one that it will be sharing with its Korean sibling, Hyundai, on its own new three-row model. Expected to be called the Palisade, it will replace Hyundai’s current Santa Fe XL when it also debuts next year.

Like Hyundai, Kia already has a three-row model in the Sorento, but the new Telluride will be the biggest vehicle the Korean carmaker has ever brought to market and is meant to continue its push away from its roots as a purveyor of cheap and cheerful econoboxes.

Expect to see Telluride offer room for eight, according to Kia – though a seven-seater with mid-row captain’s chairs is all but a certainty. The extra length over the Sorrento is expected to mean that even adults will be able to fit into the third row with a reasonable level of comfort.

We’ll have to wait for more details about Telluride, and we’re hearing that the production model will once again skip the traditional auto show circuit, this time taking its bow at the upcoming SEMA Show in Las Vegas around Halloween.

We can expect to see a V-6 deliver the necessary power, though specific details will have to wait. 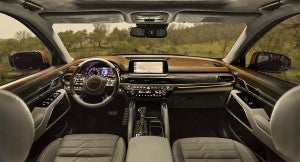 A partial look at the Telluride Concept's interior. It will offer up to eight seats.

Incidentally, Kia has promised to deliver one of the new utes to the public school systems in fashion designer Maxwell’s old hometown of Marfa, Texas. It has also chipped in with cash to help the underfunded schools add more classroom computers.

During a post-show conversation, Maxwell said that one of the reasons he wanted to work with Kia is that he grew up in Marfa being chauffeured around in his mother’s old Sedona minivan.

The relationship could grow, meanwhile, the designer telling TheDetroitBureau that he’s had discussions with Kia that could lead to his involvement in some future projects. That could be as small as helping pick interior fabrics though he added that “perhaps” it might see him lend his name to some sort of special edition model. He wouldn’t be the first to do so. Both Halsted and Yves St. Laurent had special editions bearing their names, Ford particularly fond of tying up with well-known designers.

A Kia official confirmed the talks, though specific details have yet to be worked out.