With the benefit of a good night’s sleep, President Donald Trump once again addressed General Motors’ plans to realign its manufacturing operations in the U.S. and Canada.

He took to Twitter this afternoon to reveal how he plans to deal with the situation.

“Very disappointed with General Motors and their CEO, Mary Barra, for closing plants in Ohio, Michigan and Maryland. Nothing being closed in Mexico & China,” he tweeted.

“The U.S. saved General Motors, and this is the THANKS we get! We are now looking at cutting all @GM subsidies, including … for electric cars. General Motors made a big China bet years ago when they built plants there (and in Mexico) – don’t think that bet is going to pay off. I am here to protect America’s Workers!”

“I’m going to leave that to him,” Kudlow said when asked the automaker ought to be concerned about Trump’s reaction, Reuters reported. “You may find additional announcements coming on that topic.” 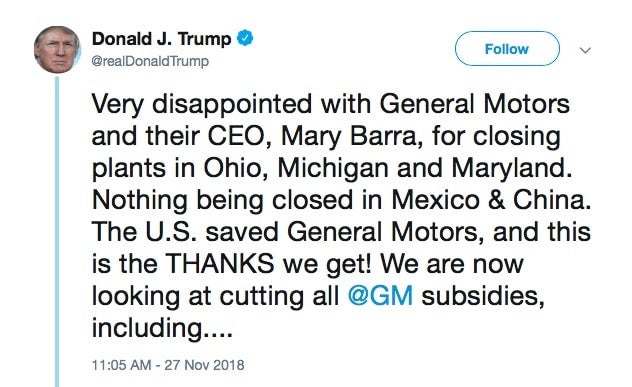 GM’s plans will likely have any impact on the nation’s economy, said Kudlow, the National Economic Council director. General Motors didn’t sit idly by and let Trump denigrate the company, releasing a statement pointing out its investment in its manufacturing operations and future plans for some of the affected employees.

“GM is committed to maintaining a strong manufacturing presence in the U.S., as evidenced by our more than $22 billion investments in U.S. operations since 2009,” the company said. “Yesterday’s announcements support our ability to invest for future growth and position the company for long-term success and maintain and grow American jobs.

“Many of the U.S. workers impacted by these actions will have the opportunity to shift to other GM plants where we will need more employees to support growth in trucks, crossovers and SUVs. GM’s transformation also includes adding technical and engineering jobs to support the future of mobility, such as new jobs in electrification and autonomous vehicles.”

In what might be considered an act of solidarity, Ford Motor Co. released a statement yesterday – without mentioning GM by name – outlining its similar efforts to streamline its workforce and right-size its manufacturing operations in the U.S. Regardless, other politicians weighed in on what they want to happen, and going after GM appears to be plan of a least one.

Representative Tim Ryan, a Democrat whose district includes the Lordstown, Ohio plant, wants congressional hearings on how GM spent what he said was billions of dollars in tax cuts resulting from the Republican-backed tax plan enacted last year. 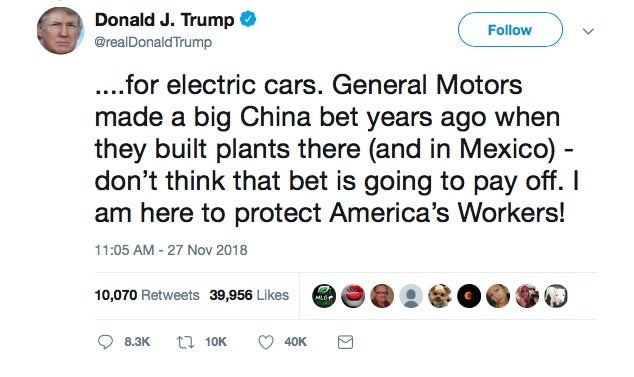 “The American people deserve to know if the tax cuts they paid for are being used to inflate corporate profits at the expense of their economic security and the survival of American workers,” Ryan wrote in a letter to leaders of the House Ways and Means Committee.

Another pointed the finger at Trump, saying it was his current trade policies that are causing automakers to take a long look at their operations in the U.S.

“This news should be a wake up call to the Trump Administration. It’s time to stop the recklessly executed trade policies and start prioritizing the American workforce,” tweeted Haley Stevens, who is a newly elected Congresswoman from Michigan. Stevens led the Obama administration’s automotive task force that helped GM out of bankruptcy.

Beyond the electric vehicle tax credit, Trump did not specify what “subsidies” the company currently receives from the federal government. However, even the effect of that threat is going to be weakened shortly.

Currently, buyers of GM electric vehicles are eligible for a $7,500 tax credit under federal law. The tax credit is applicable to all EVs, but he did not clarify how it could be revised to exclude GM. In fact, the company is nearly at its limit for the $7,500 tax credit anyway. Once GM – or any automaker – sells more than 200,000 EVs the incentive is cut in half: $3,750. There are a series of sales targets and after each is hit, the credit is reduced.