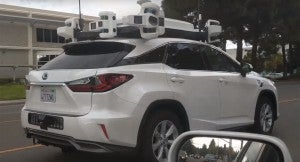 An Apple autonomous test vehicle, a Lexus RX450h, was rear-ended near San Francisco.

A unicorn got into a car accident in, not surprisingly, California. To be more accurate, one of Apple’s autonomous vehicles was involved in a collision in the Golden State.

The tech behemoth, which has said very little about its automotive plans in recent years, applied for and received a permit to test autonomous vehicles last year, but offered no insight into what its plans were at that time.

According to the state’s Department of Motor Vehicles, an Apple self-driving car, a Lexus SUV, was rear-ended by a 2016 Nissan Leaf near San Francisco. It marked the first actual confirmation that the company was testing on California’s roads.

It happened while the test vehicle was waiting for a safe gap to merge onto the notoriously congested Lawrence Expressway. Apple’s car was driving at less than 1 mph, while the Nissan Leaf was moving at around 15 mph, according to Engadget.

(Apple brings back top engineer for Project Titan. Click Here for the story.)

Apple has not offered comment on the incident, and there were no injuries.

The company has remained pretty quiet about its ambitions within the automotive space, beyond CarPlay anyway. Apple’s been rumored to have an entire automotive team working on either a full vehicle or an autonomous system for use in other vehicles.

(Click Here for more about Apple raising its profile in race for autonomous vehicles with Waymo exec hire.)

Allegedly called Project Titan, the group includes hundreds of engineers, designers and other employees, including from potential competitors like Tesla and Waymo. Apple CEO Tim Cook in June 2017 said the company was developing “autonomous systems”, which it saw as the “mother of all AI projects.”

Apple began testing in April 2017 using three Lexus SUVs. That expanded to 27 utes in January, then 45 in March and reportedly 55 in May, according to the DMV.

The autonomous program was thought to be the entirety of Project Titan, but TF International Securities Analyst Ming-Chi Kuo believes that Apple is back on track to build a full “Apple” car. He expects the car to hit the road between 2023 and 2025.