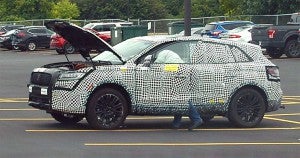 The new Lincoln Nautilus, formerly the MKX, in minimal camouflage is out for real-world testing.

Ford Motor Co. is planning some drastic changes over the next several years, the automaker all but abandoning its mainstream passenger car line-up in favor of SUVs and CUVs, reflecting one of the most dramatic transformations we’ve seen in decades.

Sometimes, big changes begin with small steps, and that appears to be the case as we look at these spy shots of two familiar models set for updates in the coming months. On the Ford side, that includes the popular Edge crossover, while we’ve also caught the Lincoln Nautilus, the renamed MKX, with minimal camouflage.

We got our first look at a concept version of the Nautilus at the Los Angeles Auto Show last November, but the image here finally captures the upcoming production model. Lincoln’s stylists have reworked the design to include more luxury touches, five new sets of wheels as well as new colors. The Nautilus also comes with a bold new front grille that is distinctly Lincoln and emphasizes the all-new front end on the vehicle that reaches back to the A pillar and windshield. 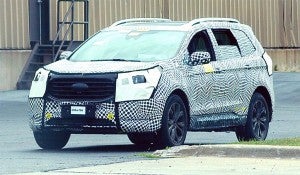 The new Nautilus interior also features a new console, instrument panel and push button gear shift that helps reduce the clutter inside the cabin. There is also a large center touch screen in the center stack that serves as the principal portal for Ford Motor Co.’s Sync 3 system as well as Android Auto and Apple CarPlay.

(Lincoln brings new Nautilus SUV to the surface. Click Here for the story.)

A turbocharged 2.0-liter, 245-horsepower engine is standard on the Nautilus, but a 2.7-liter, 335-hp engine will also be available. The Nautilus will also be equipped with a suite of Lincoln-first driver assistance technology. “The technology in this vehicle is thoughtful and purposeful. We focused on bringing in innovative features to make each drive effortless for our customers,” Kumar Galhorta, then serving as head of the Lincoln Motor Co., said in L.A. 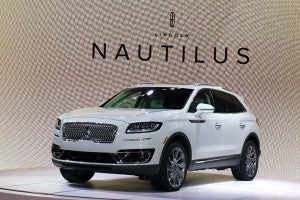 The 2019 Lincoln Nautilus gives Ford's luxury brand a midsized SUV it can compete with.

Perhaps the most significant change, however, can’t readily be seen on the luxury ute’s body: the new name. After facing years of derision for using the MK designation on all of its products – and generating plenty of consumer confusion in the process – the old MKX will become the Nautilus. The old MKT, meanwhile, will be renamed the Aviator, Ford revealed when showing off a concept version of that model at the New York Auto Show this past spring.

Ford is sticking with familiar names for its mainstream utility-vehicle family, and that includes one of its most popular models, the Edge, though the midsize crossover also gets some noticeable tweaks for the coming year.

While the overall body shape is largely untouched, the Edge will adopt a revised trapezoid grille design, seen here with most of the camo removed. There also appear to be some new wheels and, our spy photographer suggests, we may be seeing a new, high-trim version of the Edge. 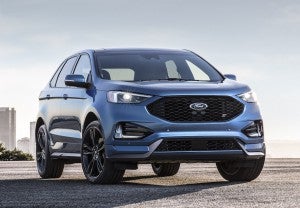 Ford is looking to pump some excitement into its midsize crossover with an ST performance package.

Ford is boasting that the updated ute will be “as intelligent as it looks,” with a range of new safety and advanced driver assistance technologies including adaptive cruise control with lane centering.

Meanwhile, we’ll see the addition of a new Edge ST model featuring a 2.7-liter EcoBoost V-6 punching out 335 horsepower and 380 pound-feet of torque.

(To see more about the new Lincoln Aviator, Click Here.)

Expect to see more Ford utes get the ST badge and matching performance upgrades, company officials are hinting. With the automaker all but abandoning its sedan and coupe lines, that’s a logical move.