The love child of a Hellcat and a Demon. 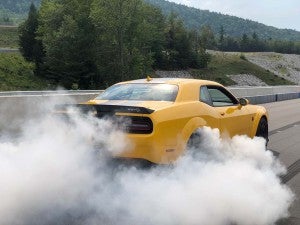 In barely the time it takes to say its full name, the 2019 Dodge Challenger SRT Hellcat Redeye Widebody will already be blasting past 60, on its way to a top speed of 203 mph.

Think of the Redeye as “the child that came out of the marriage of the Hellcat and Demon,” suggests Chris Cowland, the otherwise mild-mannered Brit who has overseen powertrain development for some of the fiercest muscle cars ever unleashed on public roadways.

The new-for-2019 Redeye is the latest in the Dodge performance line-up, offering yet one more variant on the Challenger platform. While not the most powerful version ever – a distinction that belongs to the limited-edition, 2018 Demon – the Redeye has nothing to be ashamed about. As Cowland suggests, it is, indeed, what you’d expect from the lovechild of a Hellcat and Demon, as we found during a day’s driving through the Maine Countryside, wrapped up with lap time on the Club Motorsports track an hour outside Portland.

(Ford’s newest Mustang hits – with a Bullitt. Click Here for our review.) 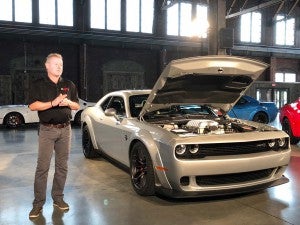 Visually, the Redeye has much in common with the already menacing Hellcat Widebody, with its massive front grille and distinctive air scoop replacing one of the foglamps found on tamer versions of the Challenger. It also shares the wheel flares that add 3.5 inches of width, allowing the extra rubber needed to plant all its power onto the pavement.

A few clues, caught be a sharp eye, reveal this isn’t “just” another Hellcat, however, starting with the additional lower air intakes that help cool the Redeye’s beefed up Brembo brakes, as well as a surprisingly low-glass subtle badge on the front fenders that plants a ruby red jewel in the devil’s eye. There’s also an optional, wide rear wing, though it essentially produces the same level of downforce and drag as the stock spoiler.

The Redeye also shares the new hood found on the 2019 Hellcat, its twin snorkels driving more air into the little brother’s big engine, allowing Dodge to boost the horsepower rating for the updated Hellcat from 707 to 717. On the flipside, it limits the amount of air the Redeye can gulp down. So, while it lifts its engine from the 840 hp Demon, it can “only” manage to deliver 797 ponies. Torque is rated at 707 pound-feet.

(Click Here to catch the debut of the new Redeye.) 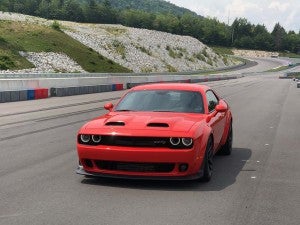 The new Redeye can deftly move fromroad course, to dragstrip to local streets.

Now, believe me, we’re not really complaining. That still puts the Redeye into rarified territory and delivers the sort of neck-snapping acceleration that immediately puts a wide grin on your face. Better yet, while last year’s Demon may have made more raw power, it was primarily designed for use on the dragstrip. The newest Dodge king-of-the-hill has been fine-tuned for both street and track use.

If anything, its on-road manners proved to be the biggest surprise. While Maine may offer some beautiful scenery, it’s not a place you go to burn rubber, down East speed limits routinely running just 34 or 40 mph on two-laners. But unlike classic muscle cars that would balk and buck and even show signs of overheating once the mercury topped 90, the Redeye maintained its composure, its big V-8 gently burbling, its eight-speed automatic shifting almost imperceptibly.

Even finding the occasional moment when we could push into, er, extra-legal speeds, meandering on local roads, saw fuel economy numbers routinely reaching up and above 22 mpg. 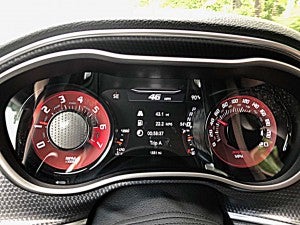 Perhaps the biggest surprise is the good mileage the Redeye delivers under light driving.

Of course, few folks are going to buy a Dodge Challenger Redeye to bobble along like that, and we got a chance to see what the big beast really could do once we arrived at the Club Motorsports track. It’s an impressive, 2.5-mile road course, weaving through some steep ground that results in more than 700 feet of elevation changes. It’s a tough, technical course that demands the best of out both car and driver.

Pulling out of pit row we floored the throttle, the Redeye’s 6.2-liter supercharged V-8 rewarding us with an almost explosive road as we launched up the track’s first, steep hill. That engine is essentially identical to what was found under the hood of the 2018 Demon, starting with a 2.7-liter supercharger capable of delivering up to 14.5 pounds of boost. To help maximize air intake, Cowland’s team came up with some creative solutions, among other things allowing the car’s A/C system to work as a “Power Chiller” in Track Mode to cool and compress air before it goes into that big blower.

Gone are the days when Detroit muscle meant sloppy cornering and marginal braking. The Challenger Redeye proved surprisingly nimble as we ran the Club track, charging from corner to corner and up and down the steep hills. Where the Demon’s chassis and suspension were specifically tuned for the dragstrip, Redeye’s Bilstein shocks and adaptive damping are better set up for street and road course driving. That said, a lead-footed driver will have to learn some finesse. Hammer the throttle too early as you come out of a corner and you could see the tail end cut loose in a hurry. 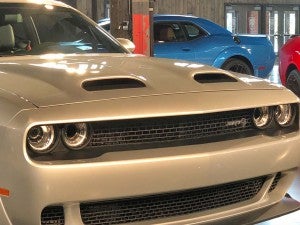 The new twin-snorkel hood boosts base Hellcats by 10 hp but limits the power of the Demon engine.

If your intent is to spend time driving to the limits on a tight road course like the one near the Maine/New Hampshire border, you may want to think about the other new entry to the Dodge performance line-up for 2019, the Challenger R/T Scat Pack 1320. Its more conventional, 329 cubic-inch Hemi V-8 “only” makes 429 hp, but it comes on much more smoothly, and in Track Mode you can’t get the jarring bang at every shiftpoint. Its suspension remains much more composed, even on a track like Club Motorsports, allowing you to go but full throttle much earlier coming out of each corner.

Of course, any advantage the Scat Pack 1320 might have in turns evaporates once you hit the straights. And, if your intent is to drag – or simply put to shame the kids cruising in their Mustangs and Camaros – the new Redeye is clearly the right choice. The car’s better aerodynamics may cut power a wee bit and cost a tenth off the line, it’s still a hell of an improvement over the “base” Hellcat, delivering 11.1 second quarter-mile runs with the standard-body Redeye package and 10.8 seconds for the Widebody at 131 mph.

For those who want to maximize performance, meanwhile, the SRT Challenger Hellcat Redeye offers three ways to ensure your best launch:

(Even with those features, you won’t want to take on a Demon, however. Optimized for the quarter-mile, it will hit 60 in a mere 2.3 second before blowing through the traps in 9.6 seconds at about 140 mph. Nonetheless, when a Dodge exec suggested the Redeye is “a Hellcat possessed by a Demon,” we took him seriously.)

With the 2015 arrival of the original Hellcat, Dodge proved it could deliver more than straight-line acceleration. And the Challenger Redeye takes things another couple steps forward. But it’s not only adept at turns, it can also deliver serious stopping power, thanks to its beefed up Brembo brake package. It shares the two-piece, 15.4-inch front rotors and six-piston front calipers brakes found on the basic Hellcat models but those additional front air scoops help keep them cool and fade-resistant, lap after lap. 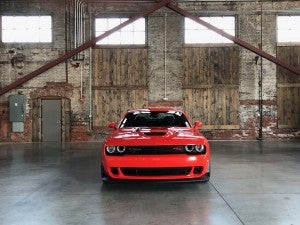 For some, the 2019 Dodge Challenger RT Scat Pack 1320 may actually be more fun to drive.

The Demon was all about the quarter mile and came stock with just a driver’s seat – though you could order a front passenger seat and rear bench for a dollar. The Redeye offers a bit more creature comfort, starting with a reasonably roomy and well-appointed interior. Inside, the Redeye features a new speedometer that now climbs to 220 mph, a flat-bottomed wheel and additional badging. There’s essentially the same, reconfigurable display as we first saw on the Demon.

The 2019 Dodge Challenger SRT Hellcat Redeye Widebody doesn’t quite qualify as a wolf in sheep’s clothing. When it pulls up behind someone, odds are they’re going to move out of the way. Nonetheless, considering how well-mannered it is on local roads, it could readily qualify as a daily driver, at least in warmer, sunnier climes. Those big tires will have some problems on snowy and icy roads.

The good news is that it delivers virtually all that you’d have wanted out of a Demon – and more, if you consider its versatile drivability – for substantially less cash. The standard-body Redeye comes in at $72,745, the Widebody going for $6,000 more. Both carry $1,395 delivery fees and you’ll be hit with a $1,700 gas guzzler tax. The Demon started at $86,090.

Dodge threw down the gauntlet with the launch of the original Hellcat. Its crosstown competition has been firing back, but with the arrival of the 2019 Challenger SRT Hellcat Redeye Widebody, they’re facing a formidable new challenge.